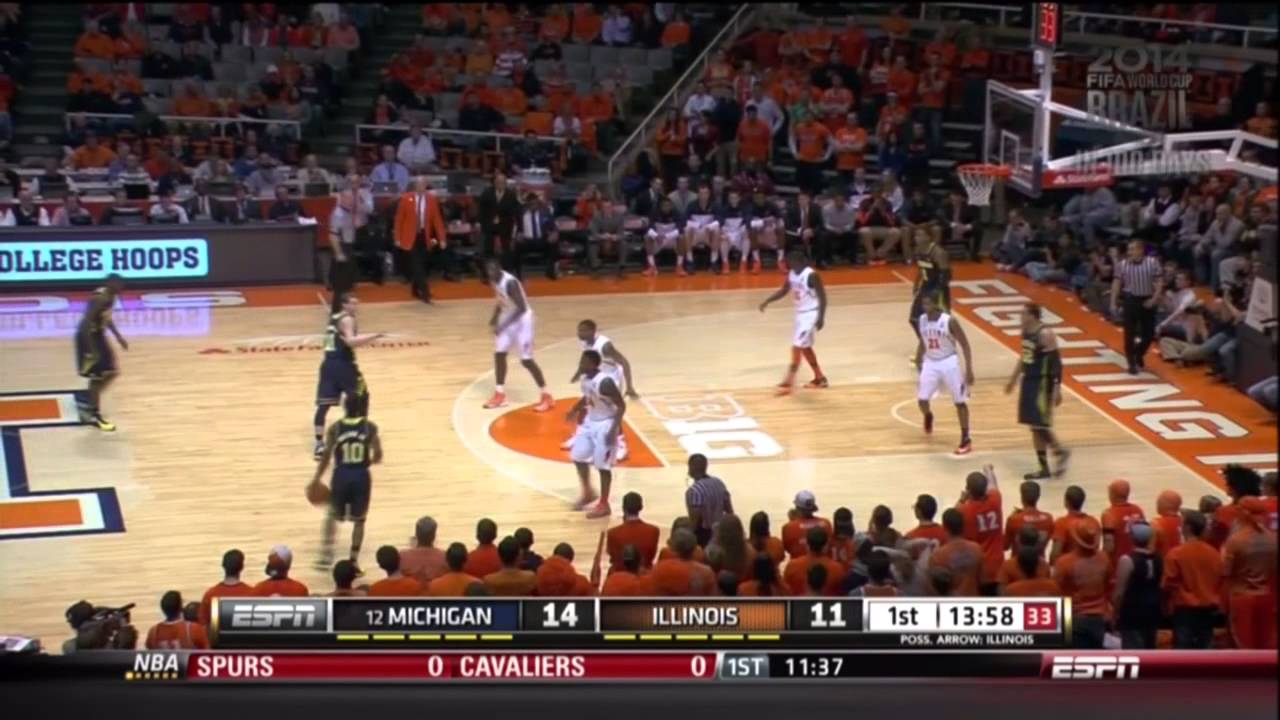 Lost in the hype surrounding Nik Stauskas making his definitive case for Big Ten Player of the Year on Tuesday night in Michigan’s 84-53 blowout of Illinois was the strong play early on of Derrick Walton. Outside of two-point shooting, the freshman had a great night. Walton only hit one of his four two-point attempts but hit his only attempt from beyond the arc for nine points. Along with his seven rebounds (two offensive) and five assists to no turnovers, this was probably Walton’s best performance since Michigan’s win over Ohio State. The Detroit native asserted himself early in this one, hitting this 3-pointer in the first play barely two minutes into the game. The breakdown for Illinois here is pretty obvious — Rayvonte and Kendrick Nunn just blow a switch on the off-ball screen Derrick Walton sets for Caris LeVert. LeVert cuts back door instead of using the screen, and both Nunn and Rice follow LeVert toward the basket. Walton simply fades to the 3-point line, receives the pass from Jordan Morgan and hits the open three. The second play shows how Walton continues to be in the right place at the right time for long offensive rebounds, as a LeVert three attempt bounces back out to him. Walton smartly slows things down and allows the offense to reset — and then turns on the jets. Rice falls asleep on a gentle nudge from LeVert at the top of the key, and Walton takes advantage by driving on him and his help, Nnanna Egwu, before hitting the and-1 layup. Finally, Walton corrals his second offensive rebound of the night with great anticipation.

Buckle up. Any team is going to be impossible to stop when almost half of its shots are threes and it knocks down 70 percent of them. Michigan just has the shooters to make that wild basketball fever dream a reality. Consider that four different players hit these five 3-pointers and that Stauskas, who was the best shooter of them all last night, only hit one. This spectacular run starts off innocently enough, with Illinois down only four points on its home court to the best team in the Big Ten. But then, Jon Horford grabs a defensive rebound and gets the ball to Derrick Walton, whose speed makes him a one-man wrecking crew for defenses trying to set themselves in transition. Walton drives and hits Caris LeVert wide open for one of LeVert’s trademarked corner threes. Joseph Bertrand tried to slide off LeVert to take a charge but instead ended up bumping knees with Jon Ekey. Michigan’s next possession actually featured better defense from Illinois, who almost forced a turnover from LeVert. Instead, LeVert spotted Zak Irvin in the corner with Bertrand helping on Horford after the center rolled and Ekey double-teamed LeVert. Bertrand is late getting back to Irvin, and the freshman didn’t need much room.On Michigan’s two ensuing offensive possessions, Irvin first turned the ball over and then missed a jumper, but made up for it later with a dish to Stauskas in the corner. Stauskas was completely covered but his height and quick release enable him to get the shot off over Rayvonte Rice. Next, Spike Albrecht made Bob Knight proud by using a great shot fake before hitting his own triple. Finally, Albrecht pushes the ball on the fast break to Zak Irvin, who’s completely unguarded. For a team ranked 14th in defensive efficiency entering this game, Illinois suffered some serious breakdowns on that end of the floor. Michigan was in control of the game by the time this run wrapped up with a 15-point lead.

Like Derrick Walton’s, the performance of Glenn Robinson III fell to the background in the wake of Nik Stauskas’s scorched-earth assault on Illinois on Tuesday. The sophomore continued his recent run of productive, efficient outings without a hitch in Champaign, scoring 13 points on 5-of-9 shooting to go along with five rebounds and two steals. Robinson did most of his damage in the first half, scoring the first points of the game on the first play of this sequence with a strong drive curling off a dribble handoff from Jordan Morgan. The next play, Robinson finds Morgan rolling after a ball screen and hits the big man. Morgan rises up and hits a bank shot over Malcolm Hill, who was in position to take a charge. That is a shot we’ve rarely seen from Morgan and it was a pleasant surprise for him not to seem lost with the ball in his hands and a defender in front of him. Later, Robinson simply shows great smarts and anticipation in picking off a routine perimeter pass and taking it all the way for the dunk. These are the kinds of plays that can get Robinson going even if he isn’t hitting on the offensive end, and lately he’s been making more of them. On the final play of this sequence, Jon Horford sets a ball screen for Stauskas, who desperately wants to hit him rolling to the basket. Stauskas fires a somewhat ill-advised pass over Ekey providing help, but hits Horford in no-man’s land under the basket. Horford makes an excellent play in kicking out to Robinson wide open at the top of the key for a 3-pointer.

Maybe Illinois’ chances at winning this game were dead before this shot went in. But with this buzzer-beating, beyond-NBA-range three, Nik Stauskas buried them six feet in the ground.

“As I was inbounding the ball, they were chanting U-S-A,” Stauskas said after the game. “So I got the ball back and I hit it and I kind of just stared at them for a couple seconds.”

On what he thinks of the U-S-A chants, Stauskas added, “I think it’s funny.”

There was nothing good-natured about the death stare Stauskas shot at the student section after he nailed the shot. The great mystery of this play is how, after hitting four of his five 3-point attempts in the first half, Stauskas managed to get so wide open. Three Illinois players followed Derrick Walton with the ball, and when the point guard kicked to Stauskas, there was no one in sight.

This is getting gratuitous at this point. Stauskas shot the lights out on Tuesday. In case you were still wondering if the sophomore could get his shot off over anybody, in the first play of this sequence Stauskas let fly with the 6-foot-11 Nnanna Egqu in his face and hit it. Then, with Bertrand positively in his shorts, Stauskas hit a fallaway in the corner. No one is going to beat Michigan when he and the rest of the Wolverine shoot the way they did.

“When teams hit a lot of threes, it’s going to be tough to beat them,” Stauskas said, stating a fact made painfully obvious by Michigan’s performance. “We understand we’re not going to shoot like this every game, though. Our defense still has to be there, our ball movement in our offense still has to be there, but it’s nice to have nights like this where things are dropping.”