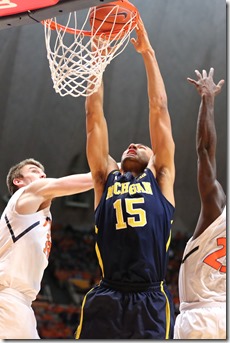 It’s been close to a month since the last Bracket Watch. Since then, Michigan has reeled off four wins in a row. The Wolverines completed the season sweep of Michigan State, won on a last-second shot in overtime at Purdue and most recently clinched the outright Big Ten title with a road victory over Illinois. (Photo: Dustin Johnston)

There’s no doubt about it: Michigan is trending up. The Wolverines are projected right on the two-three seed border and trending toward the 2-seed range. Conventional wisdom holds that Michigan needs to beat Indiana at home in order to inch its way closer to 2-seed range.

Michigan’s non-conference opponents aren’t performing at the highest level – Duke, Stanford and Iowa State have all dropped games recently – but Michigan is poised to leapfrog several of those teams (potentially Duke and Iowa State) on the s-curve. At this point their struggles help the Wolverines, who have the No. 5 ranked strength of schedule, more than hurt them.

If Michigan beats Indiana at home on Saturday, they are all but guaranteed a three seed. A few wins in the Big Ten Tournament, combined with some solid finishes from its non-conference opponents, could land Michigan a two seed. There’s more discussion on just what’s possible for Michigan’s seeding in the bracket debate. For now, things are looking up for the Wolverines.

Bracket Debate: Can Michigan get a No. 1 seed?

As a preface to this question, read the excellent analysis provided in the forum on what exactly Michigan’s future holds when it comes to seeding. The short answer to this question is yes, but many different factors must come into play to make that happen — factors largely outside of Michigan’s control.

The three teams who have effectively solidified one seeds are obviously Arizona (who narrowly escaped Oregon State Wednesday night), Florida and Wichita State. However, the fourth one seed is essentially there for the taking.

Syracuse is in a serious backslide, having lost four of its last five games. This means the Orange will likely be on the outside looking in when it comes to a top seed. The next team up, according to most projections, is Kansas. The Jayhawks recently lost to Oklahoma State but beat Texas Tech and will likely beat West Virginia to close out the regular season. The other teams in play for a one seed would be Villanova, Virginia, Duke (who lost to Wake Forest on Wednesday) and Wisconsin. To be sure, Michigan is behind all of these teams. If you want a great rundown of exactly what needs to happen for Michigan to secure a one seed, again, check out the whole post in the forum on this subject.

The next week and a half would probably have to play out perfectly for Michigan to get a one seed, but it’s not impossible. If Michigan wins the Big Ten Tournament, the Wolverines are looking at a strong contention for a top spot given the teams they would likely have to beat in the tournament compared to other conferences.

That being said, the best Michigan fans should reasonably hope for is likely a two seed. Jerry Palm, Crashing the Dance and Yahoo! already have the Wolverines there, and with one more win and a couple victories in the Big Ten Tournament, that’s probably where they will end up.