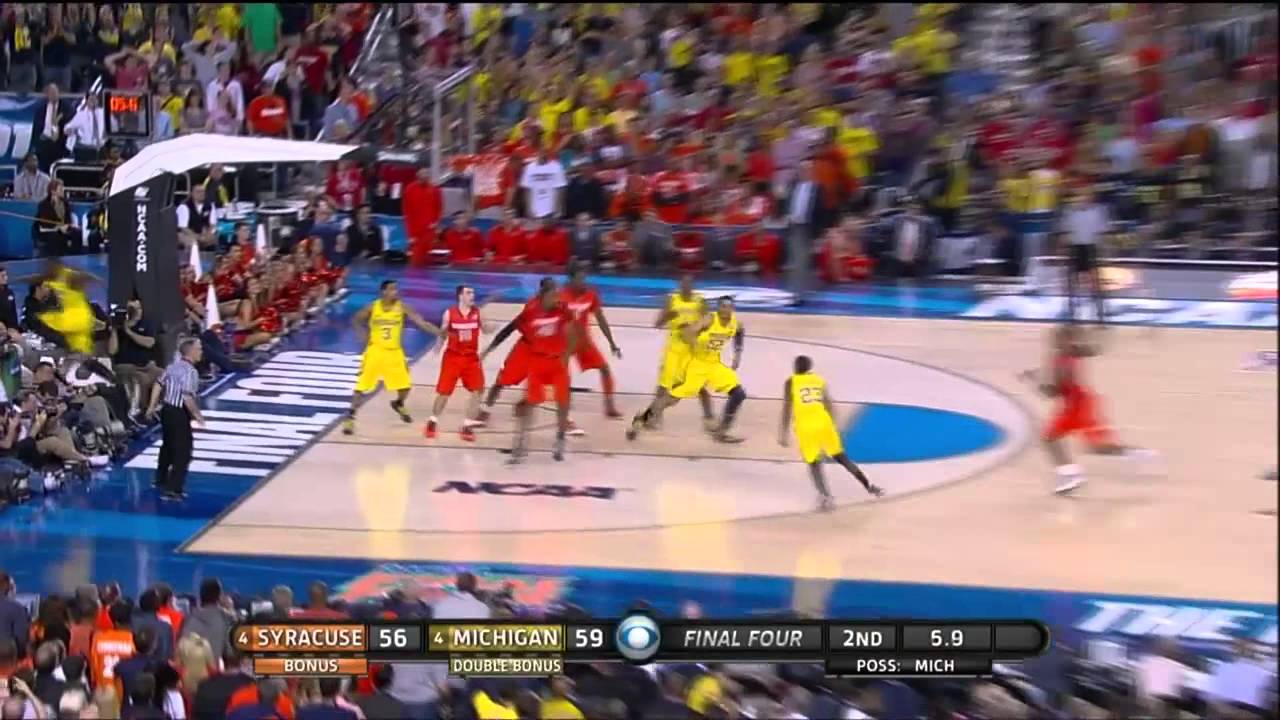 Jordan Morgan will play his final game at the Crisler Center on Saturday. Leading up to Sayurday game against Indiana, we’ll run a series of features on Morgan’s career. Today we start with a look back at five of the top moments of the 6-foot-8 big man’s career.

Jordan Morgan’s rollercoaster ride through the last two months of Michigan’s 2012-13 season had to be agonizing. Morgan went down with an ankle injury in late January and never quite returned to form. He missed the would-be Big Ten Championship winning tip in against Indiana and then watched most of the NCAA tournament from the bench as Mitch McGary emerged into a superstar.

But Michigan needed Morgan against Syracuse in the Final Four and he answered the call. With the game on the line, Morgan took a charge and then sealed things with an emphatic dunk to send Michigan to the National Championship.

“Jordan Morgan was up on the chair leading us in the end,” Beilein said after the win. “He’s on the all-defensive team.  He was going to be in there at the end when we needed stops, especially when we were going into some switching patterns, things like that, much like he did in a similar slide later in the Kansas game. So really happy for him.  Fitting that he finishes it with a dunk at the end.”

Morgan is only averaging 6.4 points and 5.4 rebounds per game in Big Ten play as a senior, but he’s been critical to Michigan’s championship effort. That was never more apparent than down the stretch against Purdue and Minnesota.

First, Morgan got to 50-50 ball after 50-50 ball against Purdue before finally coming alive on the pick-and-roll in overtime.

Against Minnesota, Morgan was a force on the offensive glass down the stretch, securing the extra possessions that eventually sealed the game and a share of the Big Ten Championship.

“It was the intangibles that aren’t measured in this stat sheet right now,” Beilein said. “Jordan Morgan has 10 rebounds or something, but the 50-50 balls that he got, what Spike did, the charges Jordan took — while all those other things are coming out that you’ll see in the stat sheet, terrific job by guys just getting things done.”

Morgan saw his offensive numbers regress in the 2011-12 season after the graduation of Darius Morris, but he still played a critical role in Michigan’s Big Ten Championship winning team because of games like this.

Morgan racked up an 11 point, 11 rebound double-double while holding future-pro Jared Sullinger to 14 points on 6-of-14 shooting with three turnovers.

“But I think Jordan Morgan was up for the challenge tonight.”

In Morgan’s redshirt freshman season he shot just 56% at the free throw line. For his career, he’s also just a 56% free throw shooter. Michigan fans have watched Morgan play 134 games and they know that free throws are no guarantee when he steps to the stripe.

But with Michigan’s NCAA tournament hopes largely hanging in the balance, Morgan stepped to the free throw line and buried two free throws in Iowa City to send the game to overtime before Michigan escaped with a win.

These were some of the biggest free throws of his career and if he didn’t make them, the Wolverines might have been watching the NCAA tournament from home rather than routing Tennessee.

He racked up 27 points on 11-of-13 shooting in a nine point Wolverine victory (box). Morgan got to 27 with the help of his teammates, specifically his roommate Darius Morris.  Morris’s ability to find Morgan rolling to the hoop on the high ball screen was majestic and Morgan finished time and again. But against the Wildcats, much of Morgan’s offense stemmed from his ability to run the floor.