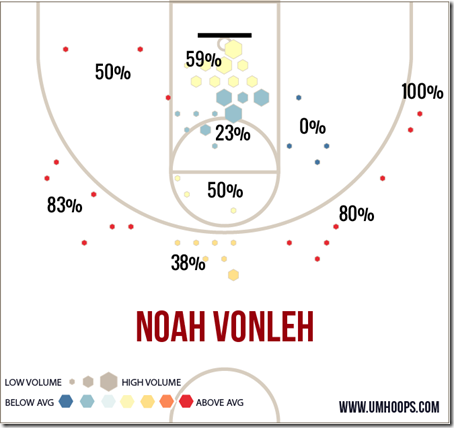 Michigan closes the regular season by hosting Indiana yet again this year. Last year’s loss to the Hoosiers certainly motivated the Wolverines’ NCAA tournament run, but the sting of defeat never quite disappeared after Jordan Morgan’s tip rimmed out in the final seconds.

There won’t be as much on the line this season as Michigan wrapped up the Big Ten Championship outright on Tuesday and Indiana’s bubble hopes appear to have popped with a home loss to Nebraska on Wednesday.

But the Wolverines are still playing for NCAA tournament seeding, revenge from last year’s disappointment and the chance to send Jordan Morgan off with one more victory. Here’s a closer look at where Indiana’s main rotation players are most effective.

Note: All shots are from Big Ten games only because Indiana played LIU Brooklyn, Chicago State, Samford, Nicholls St., Kennesaw St. and North Florida in non-conference play. I also ran these numbers before Indiana’s loss to Nebraska (a service to Yogi Ferrell who was 4-of-14, but a detriment to Troy Williams who made 3-pointers number 2 and 3 in Big ten play).

Ferrell is the only Indiana player to make more than 18 threes in Big Ten games and Sheehey is the only other legitimate three-point threat. Three of Indiana’s top five offensive threats attempt over 60% of their field goals in the paint. The Hoosiers are easy to guard because they are one dimensional.

Indiana doesn’t have a corner three point threat either. While the corner three isn’t a closer shot, as it is in the NBA, it’s still critical for offensive spacing. The Hoosiers are just 17-of-43, 39.5%, on threes from both corners in conference play. The lack of a corner three-point threat means that Indiana’s offense can’t space the floor and opposing defenses can pack the lane and over-help at the basket.

Ferrell is one of the best three-point shooters in the conference from the wings and the top of the key. Just shy of half of his field goal attempts have been from one of those three 3-point zones at the top of the key. The key to defending Ferrell is to run him off the three-point line and make him do something else — drive the rim or pull up. He’s shooting just 45% in the paint and 32% in the midrange, both below average.

Michigan fans don’t need any reminder of Ferrell’s three-point prowess and, for whatever reason, the sophomore guard always seems to play his best games against the Wolverines.

Almost all of Robinson’s offense comes at the rim. He’s made just two threes in Big Ten games and one of them was against Michigan – it was just that kind of day for the Wolverines. 74% of Robinson’s field goal attempts have been in the paint this conference season, an impressive feat for a 6-foot-4 guard. Robinson is just 10-of-27 outside the paint.

Sheehey is having his least efficient offensive season since his freshman year, but he’s one of the only players Indiana has that can shoot the ball all over the floor. His balanced spray chart leads me to believe that he’s one of the few Hoosiers that can create his own offense.

Willliams is a hyper-athletic freshman with lots of promise, but he hasn’t provided much offense other than dunks and putbacks at the rim. He’s coming off of his best game of the season against Nebraska: 18 points on 7-of-12 (2-2 3pt) shooting, which unfortunately we didn’t log here.

Noah Vonleh is a likely top-10 pick in June and oozes potential. He’s averaging an impressive 11.3 points and 8.8 rebounds per game in conference play and should be the front-runner for Big Ten Freshman of the Year, but he has never really dominated consistently like many would expect from a top ten pick. It’s hard for a post player, especially a post player in a bad offense, to dominate games, but Vonleh’s shot chart raises some interesting questions.

Vonleh attempts 75% of his shots in the paint and connects at a solid 50% clip. He’s not as good in the far paint, but if he catches the ball near the block then chances are high that he’ll score, get fouled or rebound his own miss.

He doesn’t have any mid-range game, but the big question is why doesn’t Vonleh shoot more threes?

Vonleh is shooting 14-of-21 on three-point attempts in league games, but the 21 attempts stands out as much as the 67%. No one should shoot 67% from three-point range and if they are, they probably need to shoot more.

We might never know the answer as Vonleh has been sidelined with a foot injury and was scheduled to return on Wednesday before being pulled from the lineup after warm-ups.