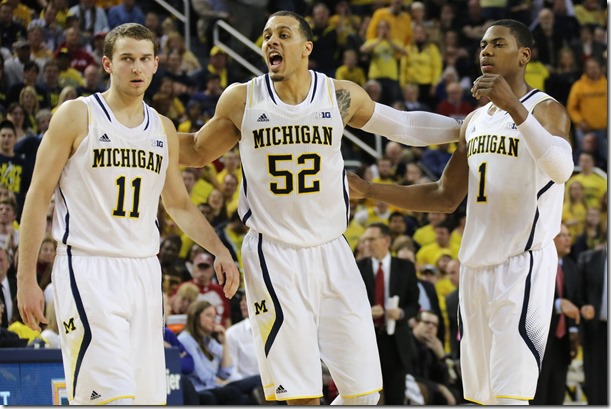 Indiana made its first nine shots of the game and would stay hot throughout. The Hoosiers out-shot Michigan by a wide margin, shooting 71% on twos and 39% on threes. But poor defense hasn’t stopped Michigan yet and it wouldn’t stop Michigan in its Big Ten finale.

The Wolverines kept scoring, but for them it was more routine than heroic. This wasn’t Michigan’s best offensive performance, just another great one. Nik Stauskas scored 21 points, putting the rubber stamp on his Big Ten Player of the Year campaign while up-and-down Glenn Robinson III added 20 points, including a decisive corner three with 1:08 to play.

But this was Jordan Morgan’s night. Morgan struggled to hold back tears when he was honored in pregame senior night festivities and then he scored Michigan’s first six points of the game. The fifth-year senior finished with 15 points and ten rebounds, making his final game at the Crisler Center one of his best of the season.

When the final horn sounded and Michigan walked away with an 84-80 victory and Morgan that led all 12,701 fans in The Victors.

This was the sixth time that Michigan’s offense had the first or second best offensive performance against an opposing high-major defense: Indiana, Michigan State (1st and 2nd), Ohio State, Arizona and Penn State.

Michigan didn’t shoot the ball poorly – 56% on twos, 27% on threes – but its 52 eFG% was below its Big Ten average. The Wolverines only hit one three in the second half, but still scored 1.36 points per trip in the second. Free throws were the difference. Michigan attempted as many free throws as field goals (24) in the second half, after getting to the line just five times in the first. John Beilein’s technical foul with 2:43 to play in the first half might just have helped a bit. The Wolverines were also exceptional on the offense glass, grabbing 36% of their misses for 15 second chance points.

This was Michigan’s third-worst defensive performance of the season, and Indiana abused the Wolverines off the bounce. Four Hoosiers topped 13 points and Yogi Ferrell led the way with 16 points and eight assists. The Wolverines were often late to help, leaving either a layup or a drop-off dunk, and just couldn’t slow down Indiana in their man-to-man defense. The Hoosiers had success doing just about anything, but their bread and butter was just inbounding the ball and running full speed at the rim off of makes and misses.

The 1-3-1 defense didn’t just get stops, it created live ball turnovers and easy offense on the other end of the floor. The 1-3-1 zone hasn’t been a fixture for the Wolverines this season, but Beilein rolled it out quite a bit in the last two games and it worked very well. While he insists that it’s his assistants convincing him to use it, the recent success means that the 1-3-1 could be a very effective tournament weapon.

Michigan’s Big Ten season couldn’t have gone much better. The Wolverines went 15-3, beat every team in the conference at least once and got to celebrate their outright Big Ten Championship on their home floor – against the team that stole a share last season. But this team has bigger goals. The Wolverines know what NCAA tournament success feels like and are desperate for more.