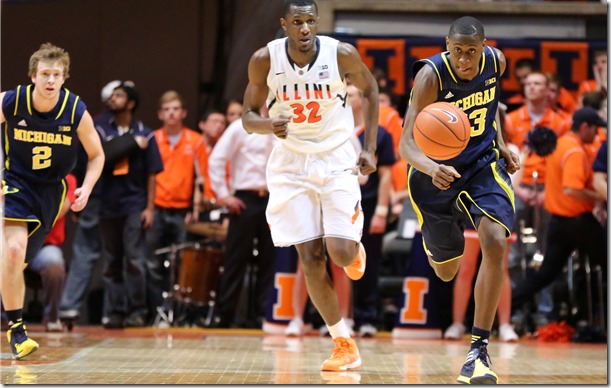 The Big Ten regular season has obviously been kind to Michigan. The Wolverines will walk away from the conference season as champions regardless of what happens on Saturday night against Indiana. And while past Big Ten seasons have left the Wolverines feeling bruised and battered, this year is different.

The Wolverines have admittedly closed out the conference season by playing some sub-par Big Ten teams, but they are still playing perhaps the best basketball they’ve played all year. The weather warming up corroborates the feeling that things are looking sunny for Michigan at the moment.

Even John Beilein, he of the grim determination, admitted to feeling a bit peppy heading into the final game.

“I think we have, even myself, we have a little bounce in our step right now, which is always good,” Beilein said. “We accomplished one big goal, and now, let’s not look back, let’s accomplish more. We have just really fine young men and now they’ve accomplished one goal. They were pretty certain that they did not want to celebrate the other night too much. They wanted to celebrate by winning this game Saturday and looking at more highlights in their season.”

Beilein admitted that Michigan is unfamiliar with the position it now finds itself in, looking ahead to one more Big Ten game with the conference title already well in hand.

“I believe that last year we were still playing for a championship in the last game,” the coach said. “So this is new territory a little bit, to have already clinched a regular-season championship and have pretty good odds of getting into the NCAA tournament, and now you’re playing.”

But he added that it won’t keep the Wolverines from taking Indiana seriously.

“Don’t forget we have Indiana players on our team,” Beilein said. “They beat us last year on senior night and got us pretty good. I think they led wire-to-wire at their place this year. I think there’s a strong sense of urgency for our guys right now. This is the way they’d like to finish the season, by beating a very good Indiana team.”

John Beilein doesn’t know if Indiana freshman phenom Noah Vonleh will be playing against the Wolverines on Saturday at the Crisler Center. The center has been out with a foot injury for the past two games.

In Michigan’s previous matchup against the Hoosiers, Vonleh was a huge factor. He only scored 10 points, but he snagged 12 rebounds (three offensive) and blocked two shots on the defensive end. But more than his stat line, Vonleh allowed Indiana tremendous freedom in defending the pick-and-roll. Vonleh was placed on Glenn Robinson III while Indiana went small with point guard Yogi Ferrell guarding Nik Stauskas and forward Will Sheehey guarding Jordan Morgan.

This allowed the Hoosiers to switch on every ball screen and completely negated Stauskas’s ability to create off of ball screens. The result was Stauskas going 1-for-6 from the floor with one assist and two turnovers in a bad road loss.

Tom Crean addressed the media on Friday afternoon and reported that Vonleh did participate in practice “some” on Friday, but his status is uncertain.

Despite the obvious effect Vonleh has on Indiana’s defense, Beilein said their principles remain the same whether he’s in the lineup or not — the Hoosiers will still switch everything, they’ll just be smaller doing so.

“(Vonleh) has got the athleticism for them to play small and do some of the things they do,” Beilein said. “He can guard perimeter guards. So what they’re doing right now, they’re playing very small — small, by that I mean a whole bunch of 6-6, 6-5 guys, all playing around Yogi — that allows them to do the same things. Vonleh is one of the few big kids in this league that can go out on the perimeter and hold his own. He’s an anomaly that way. Now that he’s not playing, Hollowell will do some of that. They’ll still have that capacity to play us differently and just switch a ton of screens.”

Jordan Morgan recovering after back injury against Illinois

Michigan redshirt senior Jordan Morgan is going to want to avoid ever traveling to Champaign, Ill. once his playing days are over.

The Detroit native suffered a disastrous ankle injury on the road against Illinois last season, and this year Morgan again went down against the Illini, this time with a back injury. John Beilein said he has spent some time in physical therapy as a result of the injury.

“The good news is he practiced yesterday,” Beilein said. “He was a little slow, I think he’s been in therapy the last couple days. He just really fell on his back and he’s got a pretty good bruise on his back. But he’s a warrior. nothing’s stopping him from being ready to play in his last game.”

Beilein said he wouldn’t be purposely curtailing Morgan’s minutes on Saturday unless the big man was in pain.

“Pain would be the only thing to keep him out of there,” the coach said. “Or if we see he’s not moving well. We could see as soon as he went back in that he wasn’t moving well, so that’s when we pulled him out and let Jon play.”

Notes: Nik Stauskas told MLive’s Brendan Quinn that the possibility of Saturday being his last game at the Crisler Center has occurred to him. The sophomore did not offer any definitive perspective on whether or not he would be leaving for the NBA after his sophomore season, however.

“I mean, maybe a little bit,” Stauskas said. “I’m not really too worried about that now at this point, but it has crossed my mind before, but I don’t know if that’s going to be the case for another month or two.”