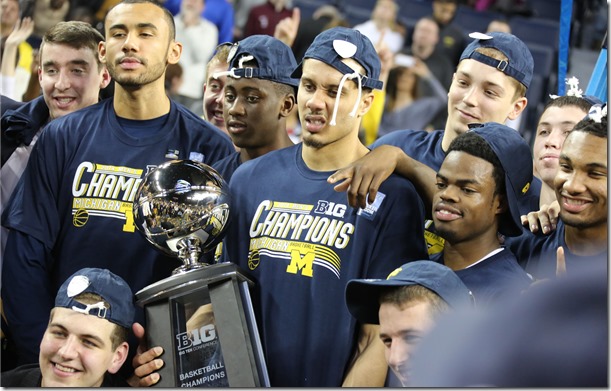 Technically, this game meant nothing to the Michigan basketball team. The Wolverines had already won the outright Big Ten title with their road victory against Illinois on Tuesday. They were going to be the top seed in the Big Ten tournament and no matter what happened on Saturday night, Michigan’s regular season would have been a success.

But this team doesn’t operate in technicalities. It is full of emotional, motivated, competitive players and led by a coach who just wants to win no matter what. Michigan came out after a tough start to the game and battled back and beat Indiana 84-80 on Saturday night, capping its regular season with a definitively positive exclamation mark. The Wolverines could have come out and played distracted, looked ahead to the postseason after a regular season that was effectively over. It would not have had a practical effect on their season. But the Wolverines were sharp, focused and dominant on the offensive side of the ball and they won the game. Why? It’s simple.

They just really wanted this one.

Michigan wanted this game for redshirt senior Jordan Morgan. The Detroit native showed some emotion as he walked out of the Blavin tunnel for the final time in his Michigan career, accompanied by his parents. But he was quick to say after the game that he was far less composed just before, filming an interview for the Big Ten Network.

“Trust me, it was worse before that,” Morgan said, standing at the podium, a piece of the recently-snipped net sticking out of his Big Ten Champions hat. “That was pretty calm compared to when they had to do The Journey interview, I couldn’t even finish that interview.”

Morgan was given several standing ovations before and after the game, but Michigan’s lone senior played like a freshman desperate for minutes from the opening tip. Morgan scored Michigan’s first six points and finished the game with a double-double — 15 points, 10 rebounds (five offensive), two steals and a block. With Indiana playing small and switching every ball screen, Morgan feasted in the paint all night.

“Especially the way they kind of game plan, I knew that if they did what they did last time — just putting guards on me — I was going to do my best to go inside and get rebounds,” Morgan said. “That’s what happened. If I don’t make them pay for that stuff, then we’re going to have a long night.”

The Wolverines wanted to send their fearless leader out with a win in his final game at the Crisler Center. They talked all week of winning the last one for Morgan, and they did their job on Saturday night.

Michigan wanted this game because of history. Last year, Indiana served the Wolverines up a heartbreaker in the final game of the regular season. With a chance to wrap up a second straight Big Ten championship, Michigan was one missed tip-in away in the final seconds. This year, Michigan couldn’t get revenge on the road against the Hoosiers, dropping its first Big Ten game on its trip to Bloomington.

John Beilein reminded us on Friday that there are more than a few Indiana natives on this Michigan team, but it was the coach himself who was the most fiery during the game. In the final minutes before halftime, Beilein was dinged for his first technical foul in two years after a dubious shot clock reset negated a three by Caris LeVert and then Spike Albrecht got whistled for a blocking foul a possession later.

“Coming into halftime, he was fired up and I think we came out with that intensity to start the second half,” Nik Stauskas said after the game.

“Beilein’s always cool but we could tell he wanted this one.”

The Indiana kids on Michigan’s roster followed their coach’s lead. Glenn Robinson III was dominant at times, scoring 20 points on 5-of-10 shooting from two while hitting seven of his eight free throws. The sophomore also hit what was maybe the shot of the game, a 3-pointer in the corner that all but put it away. Spike Albrecht only played 15 minutes but hit four key free throws down the stretch and handed out three assists. Even Zak Irvin stepped up and hit a first-half triple.

Finally, Michigan wanted this victory for the future. There is still season left, as all of the players and coaches are quick to point out just when everyone is getting swept up in the reverie. The Wolverines still have to play in the Big Ten tournament, and the NCAA tournament after that. And no matter how sweet this regular-season championship is, they know – most of them from experience – that success in March is immeasurably sweeter.

“I love playing with these guys, they’re some of the best teammates,” Morgan said. “It’s been an amazing year. So far.” Morgan paused for emphasis and then repeated himself, in case we hadn’t heard him. “So far.”

Last year, the feeling surrounding the team heading into the postseason was one of regrouping and recovery. The Big Ten season had been brutal, and the Wolverines were anxious to play other teams. This season, it’s the opposite. This team is playing maybe its best basketball of the season. It has momentum – as Beilein put it on Friday, the Wolverines have “a spring in their step.”

This victory over Indiana allowed Michigan to enter the postseason with the confidence of a champion and the momentum of a runaway freight train. There are still games to win, work to do, highlights to make.

“This season has been a great season. I hope this isn’t the last highlight,” Beilein said. “I hope we have more in front of us.”

Yes, the Wolverines wanted this game, and they got it. But now, they want more.