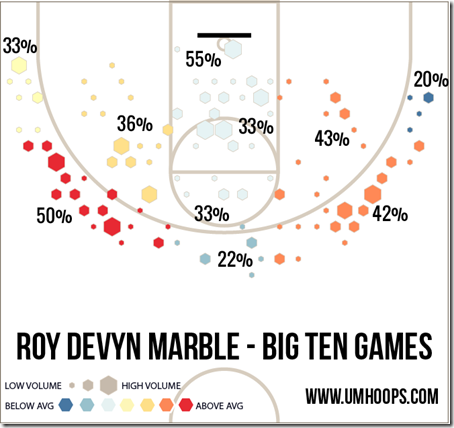 The 2013-14 All-Big Ten teams will be announced at 6 p.m. (eastern) tonight on the Big Ten Network, but we’re selecting our own team before the show. Here are our top five players in the conference, including the Big Ten Player of the Year, along with highlighted shot charts and statistics.

Nik Stauskas wasn’t just the best player on the best team in the Big Ten, he was the most complete offensive player in the Big Ten. His offensive efficiency – 123 points per 100 possessions – is unparalleled for a wing player that dominates the ball. Stauskas uses fewer possessions than the average scoring guard, but still managed to reach score 20 points or more in seven games and 15 points or more in 12 of 18 games.

Stauskas’s shot chart illustrates what Michigan fans already know: he’s nearly unstoppable on the left wing. Stauskas shoots 47% in the left corner, 51% from the left wing and over 70 percent when on the long middle two. Roughly a third of Stauskas’ field goal attempts were in the paint where 57% is a solid rate for a guard. Stauskas was also effective getting to the line and is ranked 10th in free throw rate.

Looking at his shot chart, you can see why John Beilein wants his star sophomore to shoot more, regardless of the situation.

Petteway used a third of Nebraska’s offensive possessions, 5% more of his team’s possessions than any other player in the Big Ten, which was a big reason that he was able to finish with the Big Ten scoring crown at 18.6 points per game. Petteway isn’t the most efficient player, but he still deserves a spot on the first-team.

40% of Petteway’s Big Ten field goal attempts were threes, but he shot just 31% from long distance. He shoots a ton of threes from both wings, and he’s much better on the right side of the floor than the left. It’s also important to consider the quality of shots that Petteway gets. He doesn’t have a team full of offensive weapons and he’s forced to make something out of nothing quite a often – a situation that appears to often involve launching deep threes. The fact that he shot so well in the corners on limited attempts infers that he’s a pretty good shooter when he’s open.

Where Petteway has always shined is with his shooting ability off the dribble. He settles for too many three-pointers off the dribble, but he’s excellent if he can get to the mid-range. Petteway shot 43% on mid-range jumpers and was also an above-average finisher at the rim.

Harris is one of the best two-way players in the conference, but he experienced a bit of a shooting lull down the stretch. Harris shot 23-of-48 (48%) on 3-point attempts in Michigan State’s first eight conference games, he was just 24-of-78 (31%) in the final ten.

He attempts nearly half of his field goal attempts from three-point range, but he’s not a one-dimensional player by any means. Harris connected on 48 percent of his mid-range jumpers in Big Ten play, one of the more impressive tallies in the conference. For a lottery talent with his skillset and athleticism, Harris settled for his jumper too often as a sophomore. He wasn’t able to finish at the basket as effectively as Petteway or Stauskas, finishing at just a 48% clip, and he was ranked just 28th in free throw rate in the conference.

Kaminsky’s per-game averages aren’t as impressive as some other players on the list, but that’s mostly because of his playing time. His tempo-free numbers are superb and he was the best big man in the conference. Kaminsky averaged 16 points per game over Wisconsin’s final eight games and was a big reason that the Badgers were able to revive their season after losing five of six early in conference play.

He touts Stauskas-like Kaminsky touts Stuaskas-like efficiency with an offensive rating of 122.7 and he’s a versatile talent for a big man. Kaminsky has a great arsenal of post moves and shoots 62% at the basket and 48% in the high post. He’s also a lethal pick-and-pop threat from the right wing and is 14-of-31 on threes from the wing and the top of the key.

This was a really tough choice between Devyn Marble and Yogi Ferrell. Despite the six inch and 22 pound difference in stature, both players are nearly identical statistically. Ferrell and Marble are volume shooters who love wing three-pointers and their efficiency numbers are nearly indistinguishable. Both players take a ton of threes from the wings up and are go-to scorers for their teams.

Marble used 27% of Iowa’s Big Ten possessions, Ferrell finished at 25.6%. Marble finished with a 113.4 offensive rating, Ferrell checked in at 112.7. I gave Marble the edge because he used a few more possessions and played for the better team. He was also remarkably consistent, finishing with at least 10 points in 17 of 18 conference games.

Marble shot 27-of-58 on wing threes, but was just 6-of-23 on threes from the top of the key or the corners. Marble isn’t great in the paint at 49%, but he’s able to get there consistently as nearly half of his field goal attempts were in the paint.