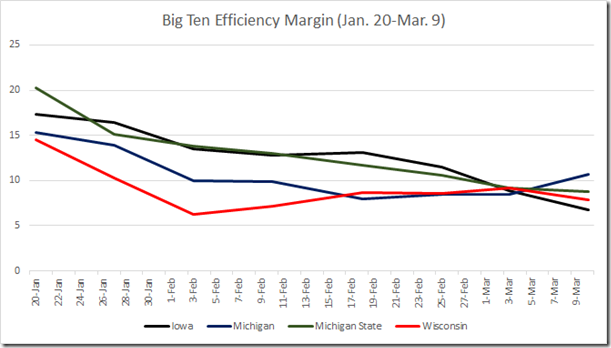 The regular season is in the books and the Big Ten Tournament bracket is set. Here’s our final Big Ten Power Rankings of the 2013-14 season.

Michigan wrapped up the outright Big Ten Championship in style last week with wins over Illinois and Indiana. The Wolverines did eventually top the table in efficiency margin, but are still a rare offense-first Big Ten champion. Michigan finished with the fourth most efficient Big Ten offense of the KenPom era (2003+).

The Wolverines managed to beat every Big Ten team at least once and were 7-2 against teams in the top half of the league, but eventually that defense might catch up to John Beilein’s team.

Frank Kaminsky is perhaps the top performing post player in Big Ten play, Traevon Jackson has made clutch play after clutch play, and Sam Dekker will be an All-Big Ten player, but Josh Gasser is the glue that holds the Badgers together. His offensive glue comes in the form of timely three-pointers and not much else:

Gasser can’t do much at the basket, but most Big Ten fans are probably familiar with his dagger three-pointers. Gasser finished conference play as the league’s top 3-point shooter, making 30-of-61 long range efforts.

Michigan State has allowed more  than 1 point per possession in 10 of its last 12 games. Anyone that’s watched college hoops over the last decade knows that’s not Michigan State defense. It’s the kind of thing that leaves your coach saying stuff like this:

“If any of you guys from Ohio think this is the old smash mouth Michigan State team, you’re kidding yourself,” Izzo said. “We’re not that team, we haven’t been that team for a while. … We’re a little wimpier than we used to be.”

And also yelling at fans and complaining about officials.

Nebraska has emerged as one of the great stories in college basketball, coming tantalizingly close to its first NCAA tournament bid since 1998 with a statement win over Wisconsin on Sunday night.

The biggest reason for Nebraska’s turnaround might not be potential All-Big Ten first-teamer Terran Petteway, but 6-foot-7 sophomore Shavon Shields. Shields was a different player in Nebraska’s final nine games of the season.

Shields was simply a more aggressive player. He improved his shooting numbers in the paint from 11-of-36 in the first nine to 33-of-52 in the second nine. He also got to the free throw line nearly twice as often – his free throw rate nearly doubled in the second half of the conference season from 36.5% to 70%.

It was fitting that Shields went out with a big 26 point performance against the Badgers.

Aaron Craft is a challenged offensive player, but don’t discredit his defensive abilities to hype. Craft graded out as one of the best defenders in the conference once again this season.

Craft made a number of critical defensive plays down the stretch against Michigan State on senior night to close out his final home game with a big victory. The Buckeyes aren’t the best offensive team, but their defense never turns off.

Iowa appeared to be a legitimate contender at one point, but its disintegrating defense has cost it dearly down the stretch. The Hawkeyes lost five of their last six, including on senior night to Illinois, and have gone from legitimate contender to afterthought in a month. The Hawkeyes were one of the two best teams in the conference according to the efficiency margin statistics until the calendar turned to March, now they are just fourth best.

This was a fitting end to Indiana’s season. The Hoosiers were tied against Nebraska midway through the second half and tied with Michigan with 1:25 to play, but let both games slip away. Indiana has been close this season, but just hasn’t been able to finish games.

Illinois managed to sandwich the worst loss in Assembly Hall (now the State Farm Center) history to Michigan (84-54) between its two best wins of the season at Michigan State and Iowa. The Illini will open the Big Ten Tournament against Indiana for a chance to avenge that blow out loss to Michigan.

Penn State improved on last year’s 2-16 season, but is still a long ways off from contending in the Big Ten. Tim Frazier’s senior year was one of his best statistically, but he never quite seemed to recapture the magic that got Penn State to the NCAA tournament in 2011.

Purdue finished last in the Big Ten at 5-13 after losing to Northwestern on Sunday afternoon. Matt Painter didn’t hold back in his post-game press conference.

“We have to a recruit a more unselfish player, we have to recruit a tougher player. We have some of those guys in our program, some guys who don’t.

“And that’s my fault. This isn’t a school district, I recruited these guys.”