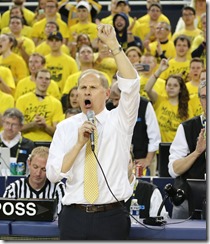 John Beilein was available to speak with the media via the Big Ten coaches conference call on Monday. The coach talked about winning the Big Ten, how he calls plays and more. you can read the full transcript of the call below. (Photo: Dustin Johnston)

Opening statement: “It was another good week for us and we’re thrilled to have clinched this (Big Ten) championship outright this past Tuesday and beat a good Indiana team on Saturday in really a tremendous atmosphere here in Crisler. Our guys are excited. We’ll be back at practice today and next week and know that we’ll have difficult challenges but great opportunities in the Big Ten tournament.”