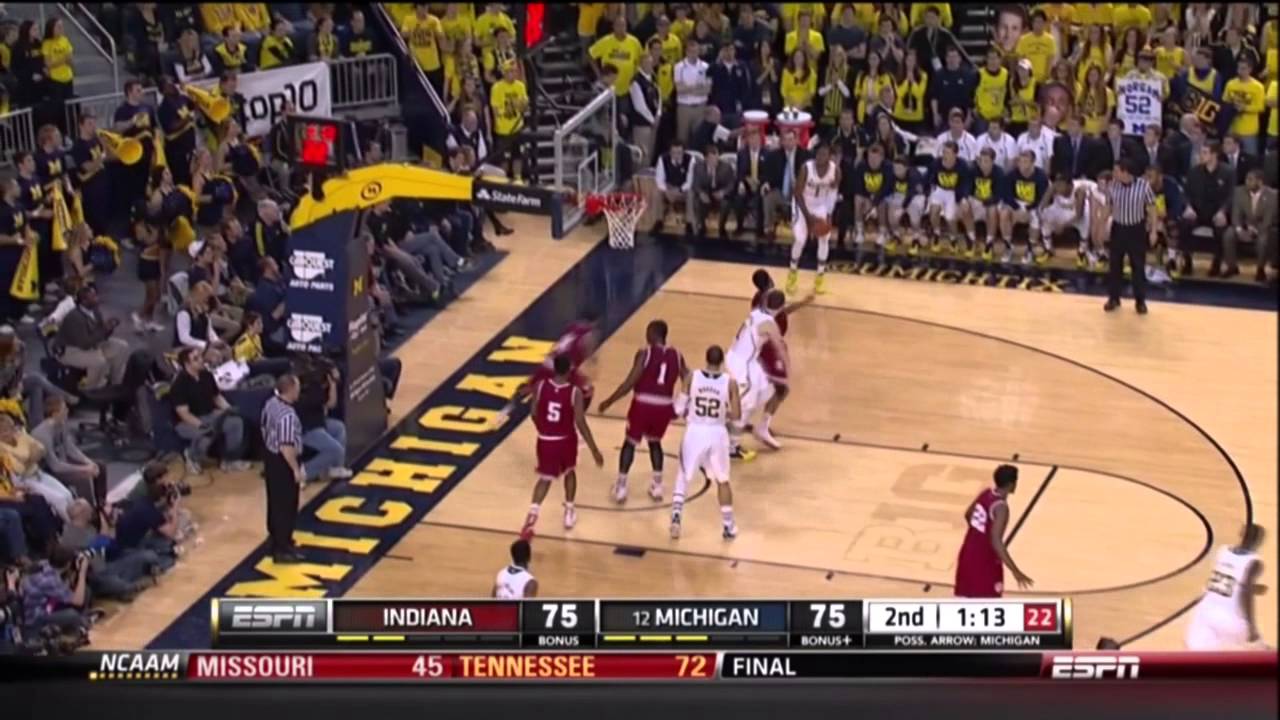 Our weekly feature tracking the performance of Michigan players performance over two game segments of the season. Form Tracker is now interactive. Readers can vote on each player’s rating by hitting ‘Too low,’ ‘Too high’ or ‘Agree.’ (Photo: Dustin Johnston)

It’s been quite the past three games for Nik Stauskas. Against Minnesota, Illinois and Indiana, the sophomore averaged 22 points per game, hit 62 percent of his shots from beyond the 3-point line (which included a 1-for-4 outing against the Hoosiers) and dished out nearly three assists per game along with that. Going back five games to Michigan’s home win against Michigan State, Stauskas has scored under 20 points only once, against Purdue. It sounds crazy to say this given the year he’s had to this point, but the young Canuck is playing perhaps his best basketball as the Wolverines enter the postseason. At the very least, he’s back to first-eight-games-of-the-Big-Ten-season production. Stauskas also pretty much willed Michigan to victory over Indiana, driving the ball to the hoop and either scoring or getting fouled over and over again in the second half.

Speaking of someone playing his best basketball of the season, Glenn Robinson III has joined Nik Stauskas in doing just that. Michigan’s super-athletic sophomore has been killing it lately, following up his game-winner against Purdue with a series of strong performances. Against Illinois, Robinson was efficient from two-point range and less so from three, which has commonly been the case as Robinson works through the problems he’s had with his shot. Versus the Hoosiers, Robinson was dominant at times scoring 20 points, hitting seven of eight free throws along with a dagger 3-pointer to seal the game late.

Last week was Jordan Morgan week here at UMHoops, and the redshirt senior rewarded us with a virtuoso performance against Indiana in his final home game as a Wolverine. After going down early with an back bruise against Illinois, Morgan returned with a vengeance after an emotional senior day ceremony Saturday night at the Crisler Center. The Detroit native scored 15 points and hauled in 10 rebounds while scoring the game’s first six points. Michigan’s last game against the Hoosiers saw the Wolverines utterly confused by their unique defensive scheme, in which they went small on Morgan and switched every screen. The coaching staff deserves credit for drawing up a great plan against a defense that befuddled them a month ago, but Morgan deserves just as much credit for executing the game plan to perfection.

Since scoring over 20 points in three out of four contests stretching from the Iowa home loss to the Michigan State home victory, Caris LeVert has achieved what had been missing from his game to that point in the season: scoring consistency. To close out the regular season, LeVert scored in double figures in six games in a row, his longest stretch of the season. Against Illinois, LeVert was a blazingly efficient 5-for-9 from the field for 15 points and grabbed four defensive rebounds. Versus the Hoosiers on Saturday, LeVert was only a slightly-less-efficient 5-of-11 for 13 points to go along with four rebounds and two assists. He also played the point man in Michigan’s 1-3-1 zone to perfection, notching two steals and forcing many more turnovers.

Just as the four players above seem to finally be completely comfortable in their offensive roles, Derrick Walton seems to still be finding his way. Over the past two games, however, it was what he did outside of scoring that was encouraging. Especially in Michigan’s win over Illinois, Walton was the perfect complimentary player to Michigan’s bevy of scorers. The freshman hit for nine points, pulled down seven rebounds (two offensive) and dished out five assists. Against Indiana Walton was less effective, scoring only four points while handing out four assists. Perhaps the most encouraging aspect of both games? In both games, Walton emerged turnover-free.

Michigan’s backup center hasn’t been bad over the course of the past couple games, just not particularly productive in the scoring column. Jon Horford played 28 minutes against Illinois and scored two points, which is somewhat understandable given that most of Michigan’s offense was initiated from perimeter shooting. He did have 10 rebounds, an assist and a block in that game as well. Against Indiana, Morgan played most of the minutes but Horford still scored six points and grabbed six rebounds.

Other than an uncharacteristic two turnovers against Illinois, Spike Albrecht was efficient in both of Michigan’s games over the past week. Michigan’s backup point guard registered 15 minutes in each contest; against Illinois, Albrecht was 2-for-2 from beyond the arc for six points and despite his two missteps still came out ahead of the assist-to-turnover ratio with three dimes. Against Indiana, the sophomore hit four big free throws down the stretch and dished out another three assists.

Zak Irvin, along with nearly every other Wolverine, had a pretty good offensive game against Illinois. The freshman fired up six shots in 22 minutes and made three of them, all from beyond the arc. Against Indiana, Irvin hit one of three long range attempts while also registering a block and a steal.