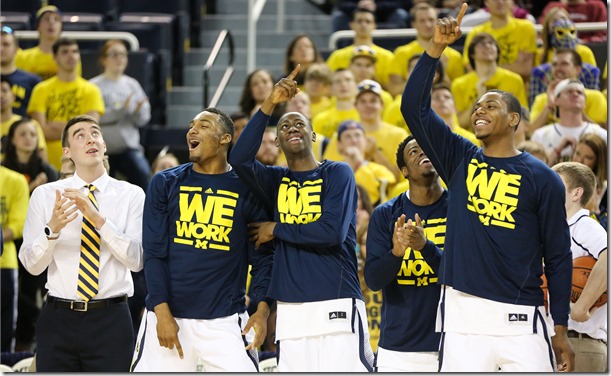 Last time we checked in, Michigan was attempting to climb the S-curve to the two seed line. While a few projections had Michigan as a two, everyone else had them as a three seed, which is where the Wolverines had been for a while.

That has changed. Notable bracketologists are unanimous in projecting Michigan as having locked in a two seed and the Wolverines are a comfortable a two seed in the latest Bracket Matrix.

Michigan’s odds of earning a top seed appear to be low, but they aren’t dead. The Wolverines would need to win the Big Ten tournament to have any claim at a one seed, but teams above them would also probably have to slip up.

Wichita State, Florida and Arizona all look to be comfortable No. 1 seeds at this point. Villanova appears to hold the final No. 1 seed right now but Kansas, Michigan, Wisconsin and a potential ACC Tournament champion (Duke, Syracuse, Virginia) are all fighting for the top line.

Of course, those are the same teams that Michigan is fighting for positioning on the two seed line. The Wolverines will be very focused on Wisconsin and Kansas — the two teams that will want to play in the Midwest regional in Indianapolis. Kansas is without Joel Embiid which could affect its Big XII tournament performance and NCAA seeding, while the Wolverines will be hoping that Wisconsin makes an early exit in the Big Ten Tournament.

Last season, the Wolverines came into the conference tournament battered, bruised and disheartened after a soul-crushing regular-season finale against Indiana that cost them a Big Tent title. This season, Michigan is playing better than it ever has this season — at least on the offensive end — going into the postseason. The Wolverines have won their last five games and almost all of their rotation players are playing well.

Michigan won the Big Ten regular season title, but there is a lot of season left. The Wolverines have a chance to make a major statement in the Big Ten tournament that could go a long way toward locking down a two seed and potentially staying close to home in the Midwest region (Indianapolis), especially if Wisconsin and Kansas falter.