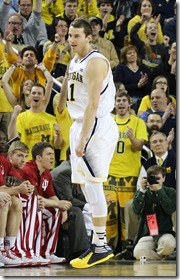 Nik Stauskas followed his coach on the teleconference on Wednesday to talk about the upcoming Big Ten Tournament. The sophomore discussed winning Big Ten Player of the Year, how he feels going into the weekend and much more. You can read notes and quotes from the teleconference below. (Photo: Dustin Johnston)