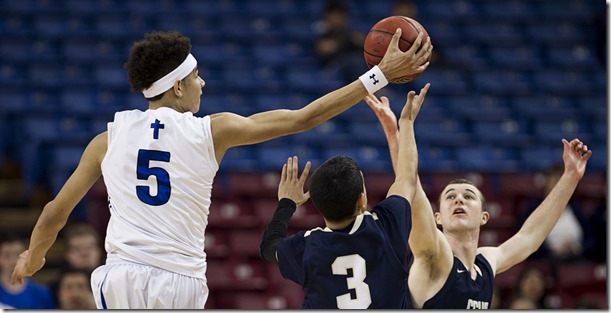 Kameron Chatman was invited to USA Basketball U18 National Team training camp. Chatman’s family announced the news on Twitter on Tuesday. Tryouts for the USA Basketball U18 team will be in Colorado Springs, Col. on June 10th, according to CSNNW.

The USA Basketball U18 National team will participate in the 2014 FIBA Americas U18 Championship, scheduled to take place June 20-June 24 in Colorado Springs.

Chatman led Columbia Christian to a State Championship in Oregon and he was also tabbed for the Jordan Brand Classic All-American game in Brooklyn. Chatman averaged 16.5 points on 73 percent shooting with 4.5 assists and 5 steals per game during the Oregon state tournament.

DJ Wilson had a monster game in Capital Christian’s 62-41 sectional win over Central Catholic to three-peat as Division V Champs. Wilson sat out last year’s state playoffs with a back injury.

The Michigan-bound Wilson had 19 points on a variety of drives, fade-away jumpers and dunks, and he yanked down 19 rebounds to go with five blocked shots. Frontcourt partner Nifae Lealao, the football star headed to Vanderbilt, muscled inside for 10 points and 13 rebounds, and seven other Cougars scored in extending their winning streak to 12. Capital Christian (27-3) led 18-0 early and was never threatened.

“It feels great to be able to play this time,” Wilson said. “Now we want to keep going.”

The Cougars, ranked No. 1 by The Bee since the preseason, now high-step into the NorCal Open Division, a tournament specifically designed last season to lump the best teams, regardless of enrollment size, into one division. And make no mistake, Capital Christian is a small school with big-time talents and ambitions. The section-title romp is just a warmup act to the primary goal of returning to Sleep Train for the NorCal Open title game on March 22.

Ricky Doyle’s Bishop Verot team finished the season 15-10 with a disappointing loss to Dunbar in the Florida state playoffs. Doyle averaged 24.8 points and 9.9 rebounds per game in his senior season.

Austin Hatch has only played in three games for Loyola, 25-3, and made both of his three-point attempts.

Kennard visited Duke last weekend and it sounds like the Blue Devils could be the team to beat.

“Coach K said they don’t promise you anything, but he believes Luke is a player, not just a 2 or a 3 or a 1, he believes he’s a player,” Mark said. “He can play any of those spots. If you watch Duke play, that holds true for a lot of his players, he lets them play. He believes Luke can come in and be a really good player there.”

His next trip may be to Ohio State in April.

“We do have one tentatively scheduled for Ohio State in April, but other than that we don’t have anything scheduled,” Mark said.

Coleman is now hearing from Auburn, where his AAU teammate Sam Logwood is headed.

“Jalen (Coleman) made some shots and that got us going offensively, but we guarded and it’s always easier to guard when you’re making shots,” said La Lumiere Coach Alan Huss. “Our energy was terrific early, and we made it tough on them.
“Our aggressiveness and intensity caught them a little bit off guard, and playing us is a little different from what they’re used to.”
Coleman led the way for the Lakers early as he scored 24 of his game-high 34 points in the first half. The junior guard was 6 of 8 from deep in the opening period.
“I can shoot, so when I get space, I shoot,” Coleman said. “My teammates trust me, and they got me the ball. It’s all about the trust between my team and my work ethic.”

Here are season highlights of Eric Davis in action.

Here’s some additional footage of Davis in action.

Ellenson had a 46 point performance in front of Bo Ryan last month:

Ellenson poured through 46 points, breaking both Rice Lake High School’s single game and career scoring records.
By the end of the first half, Ellenson had 36 points and surpassed his brother Wally as the Warriors’ all-time career scoring leader. Henry Ellenson now has a record 1,375 points.
Ellenson’s 46 points for the game breaks the previous single game modern day mark of 45 set by Dan Boe in the 1967-68 season.

Canadian point guard Jamal Murray was on campus for Michigan’s win over Indiana. Here are highlights of Murray in action.

Bacari Alexander was on hand to watch Cassius Winston on Monday night. Winston had 13 points in the 47-45 win over Detroit Southeastern.