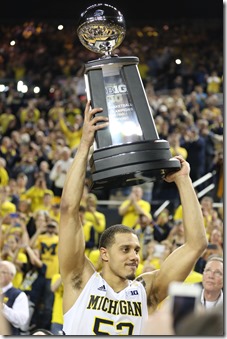 The Big Ten Tournament begins on Thursday, and while Michigan doesn’t play until Friday, there are still plenty of reasons to tune in to the first-round matchups. Michigan stands alone at the top of the league, having won the Big Ten title by three games in the regular season. But if this conference season has taught us anything, this tournament is as wide open as it’s been in years. Given the amount of upsets during the course of the regular season, a lower-tier Big Ten school could play its way into the NCAA tournament.

Below you’ll find our complete breakdown of the Big Ten Tournament, complete with our pick to win it, which players to watch for over the weekend, possible upsets and much more. (Photo: Dustin Johnston)

Do we need to go over the Buckeyes’ record in the Big Ten Tournament under Thad Matta? Over the course of Matta’s tenure, Ohio State has had unreal success in the conference tournament — the coach holds a 19-5 record in the Big Ten Tournament and has won four of them. The coach won his latest only one year ago, beating Wisconsin in one of the uglier basketball games on record. This year, the Buckeyes are down. Their Big Ten record was a disappointing 10-8 and only netted them a five seed in the tournament, which means that for the first time in a while, they’ll be playing on Friday. However, Ohio State’s stellar record in the Big Ten under Matta, along with being matched up against the worst team in the conference for game one and the four seed for game two, gives the Buckeyes a chance to pull it off.

Minnesota has to prove one very simple fact: that they are good enough to play in the NCAA tournament. The Gophers may have more riding on this tournament than any other Big Ten team, since Nebraska likely played its way in by beating Wisconsin at home in the final conference game of the regular season. Minnesota had its chances for a big win like that near the end of conference play, going up against Wisconsin, Michigan and Michigan State in the last month, but the best it could come up with was a home win over a struggling Iowa team. With a run in the Big Ten Tournament, the Gophers could play their way in to the Big Dance.

Who doesn’t like Nebraska? Along with having the most likable coach in college basketball, the Cornhuskers are entering the weekend as arguably the hottest team in the conference. Nebraska has won 10 out of its last 12 games and is coming off of the biggest win in the program’s recent history, a 77-68 home win over Wisconsin that probably locked them into the NCAA tournament for the first time since 1998. How have the Huskers gone on such a tear? Part of the reason is that they got through their tough stretch of conference play early. But the other piece has been defense: Nebraska has the second-best defense in Big Ten play with an efficiency rating of 99.2.

As I talked about with Thomas Beindit on the UMHoops Podcast yesterday, Iowa has plenty to worry about heading into this weekend. For one thing, the Hawkeyes are in the middle of a precipitous slide out of the top tier of Big Ten teams — they’ve lost five out of their last six games, including losses to Illinois and Indiana. While they face a Northwestern team that is on a similar downward spiral, Iowa needs to beat the Wildcats and secure an opportunity to get back on track against Michigan State in the second round. The only problem? Michigan State has eliminated Iowa in the past three straight Big Ten Tournaments.

We have to admit, the Wolverines have the smoothest path to a Big Ten Tournament title as the number one seed. Michigan will play either Illinois or Indiana in its second-round matchup, both teams it has played — and defeated — in the past two weeks. While Indiana has given Michigan trouble this year, Illinois was embarrassed at home by the Wolverines on March 4th, losing by 31 points thanks to a complete inability to stop Michigan’s offense. Not only does Michigan have plenty of favorable and recent history with the two teams it could face in its first game, it hasn’t lost to any of the teams it could be playing in its second game — Minnesota, Ohio State or Nebraska.

Outside of Michigan, the Badgers are playing some of the best offensive basketball in the conference right now. While it dropped their final game on the road at Nebraska (where no Big Ten team besides Michigan won this season), Wisconsin won eight straight games before that — including wins over Iowa (on the road), Michigan State and Michigan (on the road). With two models of efficiency in the starting five — Josh Gasser is the 7th-most efficient player in the country, according to kenpom, Frank Kaminsky the 45th — the Badgers have a strong chance of taking home the Big Ten Tournament championship.