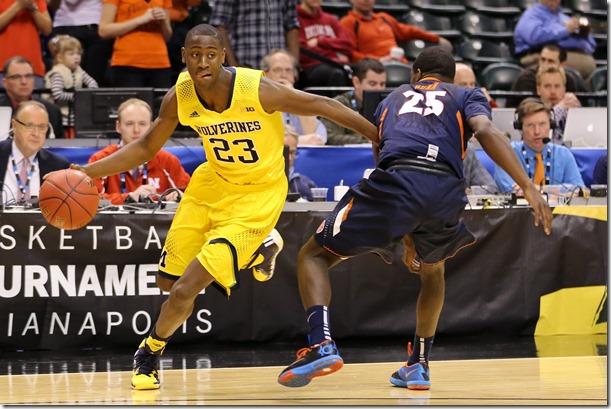 Michigan hit the ground running against Illinois with a sterling offensive first half featuring great ball movement, shooting and execution. The Wolverines led by five at the break and looked like they would have a comfortable opener at the Big Ten Tournament. But the Illini, winners of five of their last six games, wouldn’t go down without a fight.

Illinois switched to an aggressive, trapping zone defense midway through the second half and gave Michigan everything it could handle.  The Wolverines only made three field goals in the final 12  minutes and allowed the Illini to take their first lead since the opening minutes with 4:53 to play in the second half.

Despite the late Illini run, Michigan made just enough plays down the stretch to escape. Down one, Michigan forced a shot clock violation in the final minute with a great pick-and-roll trap by Jordan Morgan and Derrick Walton. On the ensuing offensive possession, Nik Stauskas found Jordan Morgan rolling to the basket for the eventual game winning layup. Illinois would come close on its final offensive possession as Trace Abrams missed a five-foot floater as the clock expired and the Wolverines escaped.

Michigan’s offense scored 49 points in its first 40 offensive possessions, but managed just 15 points in its final 16 possessions over the last 15 minutes of play. Illinois switched to the zone and Michigan’s offense went stagnant. Illinois has a great zone defense, a big reason for its late season turnaround, and Michigan just couldn’t hit perimeter shots. But if the result of that 10 minute stretch is that teams try to zone Michigan in the NCAA tournament, that’s probably a win for Michigan. The Wolverines have played great zone-offense all season and aren’t going to struggle against many zone defense.

Defensively, Michigan couldn’t handle Illinois off the dribble-drive. This, not the struggles with zone-offense, is what the Wolverines need to fix. The Illini were able to beat the Wolverines off the bounce from the perimeter which resulted in Jordan Morgan getting into foul trouble. Morgan was clearly the anchor of Michigan’s defense and when he was off the court, Michigan’s rotations struggled. Illinois had a strong offensive rebounding game, outscoring Michigan 17-7 in second chance points, and was able to get to the free throw line in the second half.

The 1-3-1 zone, which worked beautifully against Indiana, was picked to pieces by the Illini. Illinois scored 11 points in the eight possessions that Michigan ran the zone and only turned the ball over once.

Michigan’s game winner and Illinois’ would be game winner were from similar spots on the floor, but had drastically different probabilities of falling. In Big Ten games, Morgan converted 75% of his shots in the paint. Tracy Abrams? He’s just 29% of his paint looks in Big Ten games.