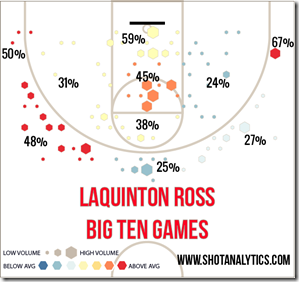 Michigan has never beaten Ohio State in the Big Ten Tournament and the Buckeyes have ended Michigan’s last three trips to Indianapolis with a loss.

The Buckeyes have been a dominant force in the Big Ten Tournament, reaching the final in five straight seasons, and as harsh as it sounds, Michigan hasn’t been.

But the Buckeyes know how to win in Indianapolis and the Wolverines will have their hands full against an Ohio State team that came back from 18 points down to beat Nebraska on Friday afternoon.

Ohio State leads the conference in forced turnovers, creating giveaways on 21% of its opponents’ possessions. The Buckeyes are somehow able to force those turnovers without fouling and are ranked third in the conference in free throw rate allowed. Ohio State has been weak on the defensive glass, allowing conference foes to grab 30% of their misses (7th B1G). Michigan rebounded 42% of its misses in the first meeting as Jordan Morgan and Glenn Robinson III combined for 10 offensive boards.

Ohio State is ranked just 125th nationally in offensive efficiency and checks in at 6th in the Big Ten, scoring 1.03 points per trip. The Buckeyes are only the 7th best shooting team in the conference, making 49% of their twos and 32% of their threes. Ohio State turns the ball over on 17% of its possessions (7th B1G) and only grabs 26% of its missed shots. The Buckeyes do a great job of getting to the free throw line and attempted 43 free throws per 100 field goal attempts in Big Ten play.

Aaron Craft and Shannon Scott are one of the best defensive backcourts in the country. They have great hands, play physically and force more turnovers than anyone else in the conference. However, they are also a big reason for Ohio State’s offensive struggles.

Both players are average finishing at the rim and shoot very few jumpshots. Scott shoots a few more, but has been a below average shooter in league play.  Craft has been essentially just a driver as 74 of his 119 field goal attempts in Big Ten games were at the rim. Michigan played off of him in the first meeting and he had just eight points.

LaQuinton Ross (16.8 ppg) and Lenzelle Smith Jr. (10.1 ppg) are Ohio State’s only double-digit scorers in conference play. Smith shoots a lot of threes, but is most effective from the left corner and with a floater in the lane. Ross loves pick-and-pop triples form the left wing, can score in the paint very effectively, but is inefficient with his mid-range jumper.

Sam Thompson provides a super athletic offensive option on the wing. He can knock down the occasional three-point jumper, but isn’t a consistent scorer. Amedeo Della Valle had 12 points, six rebounds and three assists off the bench in Ohio State’s win over Nebraska and provides an extra offensive dynamic.

Michigan natives Amir Williams and Trey McDonald split playing time at the five spot. Williams is a great rebounder, but has the tendency to chase shot blocks and pull himself out of rebounding position. Neither player is a great scorer, but both can finish if they catch the ball cleanly down low.

Ken Pomeroy likes Michigan in a toss-up, projecting a 65-64 Michigan win with a 54% chance of the Wolverines advancing.