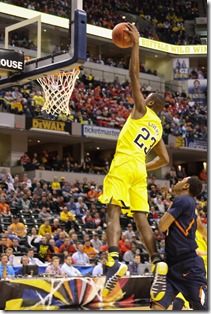 INDIANAPOLIS — If you were watching Michigan’s 64-63 victory over Illinois on TV, it would have been easy to feel convinced that the Illini offensive possessions were a recording of a single possession, played over and over again.

I wasn’t watching on TV — I was at the Banker’s Life Fieldhouse in Indianapolis for the second day of the Big Ten Tournament on Friday. Thus, I knew for a fact that every Illinois possession was live, despite their repetitive uniformity. The Illini held a game-long party at the rim, shooting 36 two-pointers, hitting on over 52 percent of them, and scoring 32 points in the paint.

The Wolverines were completely unable to stay in front of Illinois on the perimeter. Joseph Bertrand was especially effective getting to the rim in the first half, while Rayvonte Rice got to the bucket at will in the second. In the context of Michigan’s season to date, Illinois’ 1.12 points per possession didn’t constitute a particularly poor defensive effort — opponents average 1.07 points per trip against the Wolverines. But in the context of Illinois’ season, 1.12 points per possession is tied for its second-best offensive performance in Big Ten play.

It wasn’t so much how much Illinois scored, but the way in which the Illini got their points. Illinois made it clear they were going to drive right at the Wolverines all game, and Michigan was unable to stop them. The really disturbing thing about this is that it’s becoming a trend outside of just Friday afternoon’s game.

“Everyone’s been doing the same thing against us lately — they’re just taking advantage of the rules,” Michigan coach John Beilein said in the locker room after the game. “Indiana did the same thing. They just drive it right at you. Our big men are in there trying to take charges and they get in foul trouble doing that. We’ve got to do a better job of guarding our yard. It’s something we work on like crazy. We didn’t do a very good job with it today.”

Michigan’s defense has not been good this season. This is something every Michigan fan knows. But in this game, the defensive shortcomings were thrust into the spotlight. There are two reasons for this: one, the intentionality of Illinois’ offensive strategy; two, Michigan’s offense was completely stopped in the final 10 minutes of the second half. Since Michigan couldn’t get stops, Illinois came back and almost stole the game.

So was Michigan’s defense any worse than it usually is? Not really. The Wolverines’ inability to guard was just more obvious because the failings occurred mostly in one-on-one situations and the final stretch of the game saw their offense completely stymied.

Illinois ran a trapping 2-3 zone for much of the game, but it was especially effective in the final quarter. In the final 11:16 of the game, Michigan had three field goals — one being the game-winner from Jordan Morgan. That sort of ineptitude is unheard of for a Wolverine offense that has been close to unstoppable in the past five games.

After the game, Glenn Robinson III noted that part of the reason Michigan couldn’t score was simply because it wasn’t hitting shots it normally knocks down.

“They were playing like a 2‑3 zone and it was really high, so they know we have a lot of shooters on our team, so they were kind of taking that away,” Robinson said. “We tried to hit the middle, and once we did that we got a lot of open looks, but we weren’t hitting jump shots today like we normally do.”

This is a good point. After hitting six of their 13 3-point attempts in the first half, the Wolverines made only 4-of-17 attempts in the second. Usually-dead-eye shooter Nik Stauskas shot an abysmal 2-for-10 from beyond the arc, 0-for-6 in the second half. Other than an uncharacteristically sloppy turnover from Spike Albrecht, Michigan’s struggles on offense in the final stretch of the game included 10 missed 3-pointers. The Wolverines even missed three triples in one possession, which would have been comical had the game not been so close.

Michigan assistant coach LaVall Jordan joked that the 3-point shooting certainly looked a bit different in this game as opposed to Michigan’s previous showdown against Illinois.

“If we could make 16 threes every time, it’d probably be a lot easier (laughs),” Jordan said in the locker room after the game. “But you’re not counting on that. This league is so tough that you’re expecting a one-possession game every night. And it’s been that way all year long. I don’t think the Big Ten tournament is going to be any different.”

Michigan was confronted with two issues on Friday — one a short-term mishap, the other a long-term worry. The offense is way too good to experience many more dry spells like the one that occurred during the second half of this game. The defense, however, will continue to be something the offense must cover for. Even Michigan’s 1-3-1 zone couldn’t stop the bleeding.

Nik Stauskas indicated that his team can still make strides on defense this year.

“I think we still have some strides to make defensively,” the sophomore said at the podium after the game. “I think that’s where we’re really going to be at our best once we start locking down defensively.”

It’s nice to hope, but probably unreasonable to expect that Michigan will all of a sudden become a decent defensive team come NCAA tournament time. Michigan fans can take solace in the knowledge that cold streaks like the one Michigan experienced on Friday are few and far between, and that expecting Michigan to outscore opponents is usually a safe bet. These worries were overshadowed and the results of Michigan’s shortcomings negated by a terrific pass from Nik Stauskas to Jordan Morgan off a high ball screen with seven seconds left.

And with that, Michigan moves on.