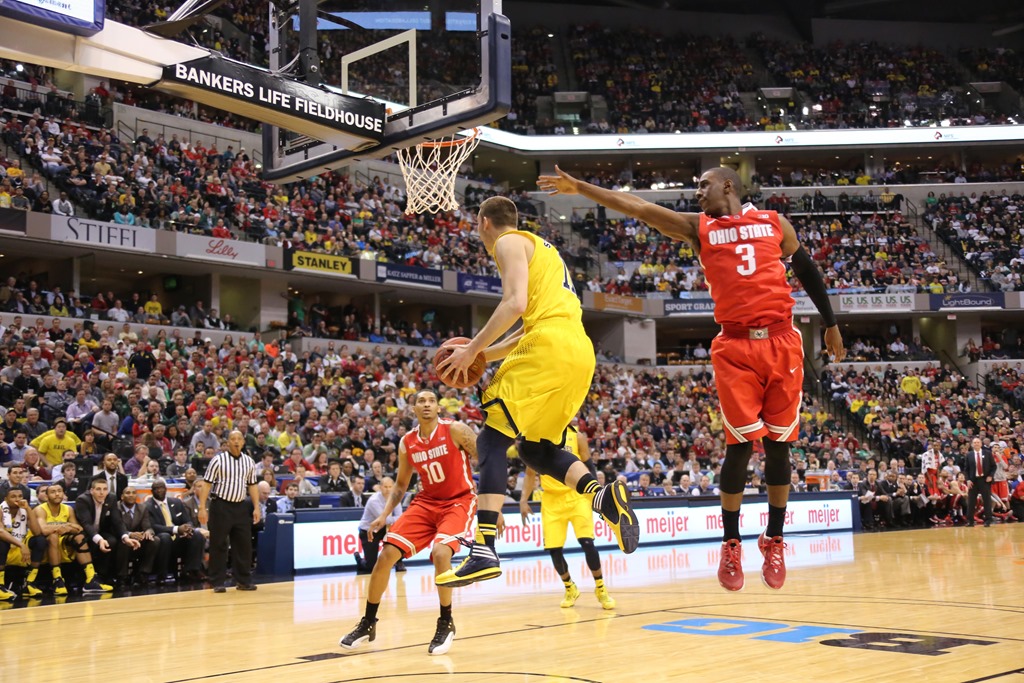 Michigan is going to the Big Ten Championship game for the first time since 1998.

The Wolverines looked unstoppable at times against Ohio State, but they were far from perfect. Michigan scored 37 points in its first 24 possessions – a ridiculous 1.54 points per possession – and looked poised to runaway with a semifinal win.

But whenever the Wolverines looked ready to pull away, the Buckeyes hung around. Ohio State answered every Michigan run with a run of its own. The Wolverines led by 16 points midway through the first half, but Ohio State cut the lead to four at the half. Michigan extended the lead back to 12 in the second half, but the Buckeyes came all the way back and took a three-point lead with 4:12 to play in the second half.

In winning time Michigan went to its sophomores and Ohio State went back to Aaron Craft, who sat on the bench for nearly nine minutes after picking up his fourth foul.

Nik Stauskas made a 20-foot contested jumper to cut Ohio State’s lead to one. A minute and a half later, he made a ridiculous up-and-under layup to give Michigan a three point lead.

On the other end of the floor, Craft missed a pair of free throws and an unguarded three as the Buckeye offense sputtered.

But the biggest play of the game wasn’t a dunk, step-back jumper or highlight layup, it was Caris LeVert crashing the glass to rebound a Stauskas miss with the Wolverines leading 71-69 with 13 seconds to play. Spike Albrecht split a pair of free throws to extend the lead to three and Craft’s desperation final attempt slipped out of his hands before the final horn.

In the end, this was Michigan’s fifth best shooting performance of the season. The Wolverines actually shot the ball better in wins over Illinois, Purdue and Nebraska this year. Michigan finishes the season with the two best offensive performances against the Buckeyes – 1.19 points per trip in Columbus, and 1.14 points per trip today. Michigan was lights out from three-point range in the first half and finished 12-of-23 from long-range for the game.

There were frustrating moments – Michigan turned the ball over on 19% of its possessions which led to 20 Ohio State points off of turnovers – but this was a strong offensive performance against the third-best defense in the country. Michigan did a great job of getting to the free throw line – 19 free throw attempts to 47 field goal attempts – but couldn’t convert on the freebies. The Wolverines shot 78% on free throws in Big Ten play, best in the conference, but were just 10-of-19 at the stripe.

Michigan’s offense is clicking at the right time. I would argue that Michigan has only been ‘out-scored’ only once this season, versus Arizona at home. Other than that , the Wolverines are 24-1 when they manage at least 1.06 points per possession. When Michigan’s offense is stopped, held below 1.06 points per trip, the Wolverines are just 1-6. This isn’t a team that’s going to lose many shootouts, even with a lackluster defense, but it’s a team that can’t win if it doesn’t score.

The Wolverines continue to underwhelm defensively. Ohio State scored 1.09 points per trip, well above its Big Ten average of 1.03 points per trip. Shannon Scott had his best game in a long time with 18 points on 7-of-10 (4-6 3pt) shooting with six assists, but it’s tough to blame Michigan for some of that. The scouting report was obviously to play off of him and make him beat you with the three, on this night he did. Michigan experimented with both the 1-3-1 zone, which forced turnovers but also gave up corner threes and a huge alley-oop to Sam Thompson, and the 2-3 zone. We haven’t seen any 2-3 zone from Michigan in a while, and it wasn’t that effective.

This was Michigan’s first win over Ohio State in the Big Ten Tournament and the Wolverines will face Michigan State at 3:30 p.m. on Sunday afternoon. The 1-seed appears to be a very real possibility as ESPN’s Joe Lunardi moved the Wolverines up to the No. 1 line after beating Ohio State.