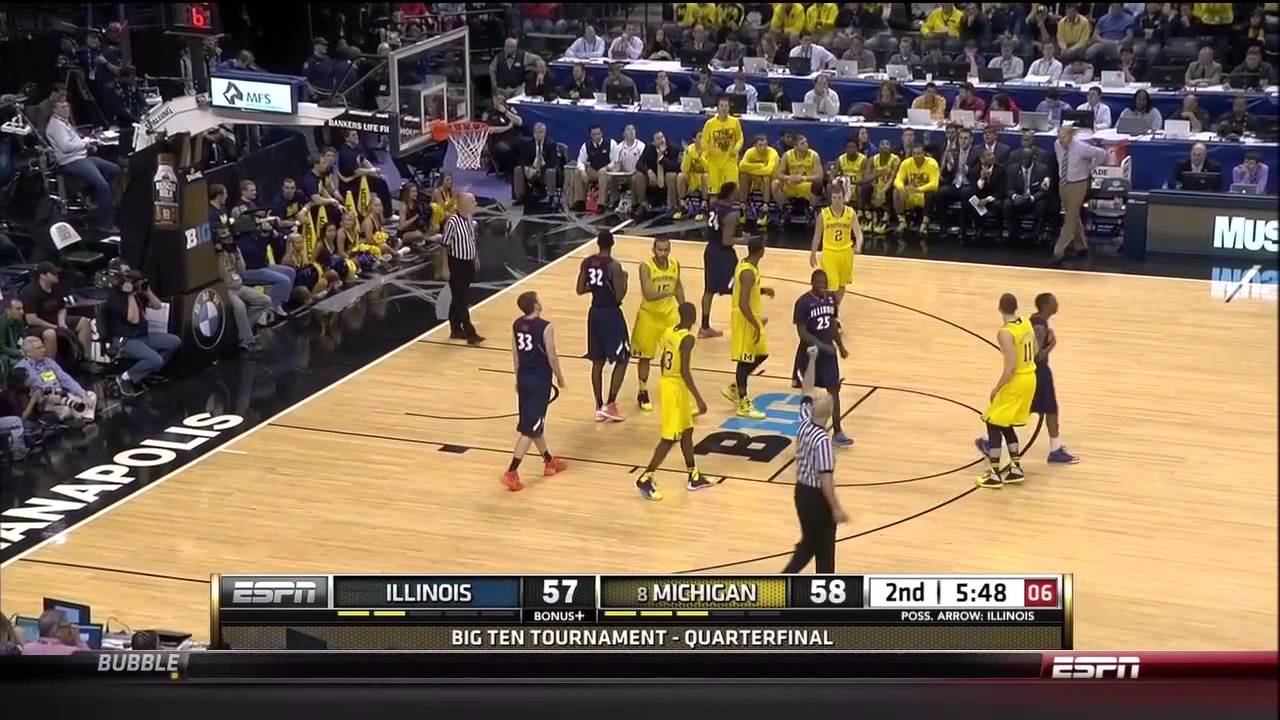 1) Michigan closes out the half strong

We’re picking things up late because Michigan’s 64-63 victory over Illinois on Friday afternoon went down to the wire. Before these three plays occurred, Illinois had played the Wolverines very tight for the first half. The Illini got into the lane at will on Michigan from the start, but the Wolverines were able to answer with offense of their own. However, at this juncture of the game, Illinois was closing up a 7-0 run that took the score from 30-23 with just under five minutes left to tied about a minute later. Michigan was looking for an answer, and Nik Stauskas provided the first one. This 3-pointer was reminiscent of one of Stauskas’s threes against Michigan State in that Jordan Morgan’s defender stayed home on the screen and Stuaskas simply rose up over his own defender and fired. After Illinois answered with a Jon Ekey 3-pointer on the other end, Caris LeVert took matter into his own hands, pulling up for a three of his own off the dribble. More than anything, these two shots showed just how easy it can be for Michigan to score points. When in doubt, they have multiple shooters who possess the ability to pull up from just about anywhere and fire. Finally, as the first half wound down, Michigan forced a turnover on the defensive end — one of the few times the Wolverines stopped any Illinois player in the paint — and pushed it ahead on the fast break. Derrick Walton makes an unbelievable quarterback-like pass to lead LeVert toward the rim. LeVert rises up and slams it home, giving Michigan a five-point lead heading into the break.

Despite normally being a very good offensive team going against zone defenses, Michigan was mostly stumped by Illinois’ 2-3 look in the second half at the Bankers Life Fieldhouse in Indianapolis. It looked as though there was a trapping element to it on the wing and at the top of the key, but Michigan coach John Beilein didn’t mention it being anything other than a straight 2-3.

“No, it was all 2‑3 zone,” Beilein said. “They ran some full court action just to slow us down. I’ll have to look at the quality of our shot a little bit. Nik went two for ten in the game and ‑‑ I think those were the best shots he got were against the zone. He didn’t knock them down, but we had people knock down big ones early in the second half between Spike, Glenn Robinson, Derrick Walton, but we’re going to have to make some of those because they were really packed in there.”

Glenn Robinson III mentioned that Illinois played very high up in its zone, as you can see early in the second play of this sequence. This makes sense given that the Illini were trying to play a 2-3 while somehow not also giving up open looks from three. Illinois was anticipating ball screens at the top of the key, and they would essentially lock the rails on the ballhandler using both defenders at the top of the zone. Because this left Michigan’s shooters open on the wing, one of the defenders down low would help up off the baseline and cover the wing before. This may be what Spike Albrecht was anticipating on his turnover — he thought Joseph Bertrand was going to help on Caris LeVert, but Bertrand instead stayed home on Robinson cutting baseline and anticipated the pass. John Groce’s defensive strategy worked to perfection — Michigan hit three field goals in the final 11:16 of the game.

Michigan’s defense took a beating all game long, with the Illini getting into the lane at will. But on this play, the second-to-last defensive possession of the game, Michigan’s defense came up huge. Specifically, Jordan Morgan came up huge. The offensive strategy by Illinois appeared to be the same as it had been all game — find a mismatch, drop a shoulder and drive the ball. It seems as though the Illini couldn’t find the matchup they were looking for on this possession before Tracy Abrams ended up with the ball guarded by Derrick Walton at the top of the key with 10 seconds left. Watch Jordan Morgan just before the screen is set — he is directing his teammates defensively. Then, he sprints to the perimeter with Nnanna Egwu setting the screen on Abrams. Morgan hedges and, together with Walton, completely blankets Abrams with a double team. Morgan and Walton both expertly use the sideline as a third defender in trapping Abrams and there is just nowhere to go — Morgan doesn’t allow him to reverse the ball, Walton is playing off and guarding the drive, and the sideline is guarding him the other way. In a game that saw Michigan allow countless layups inside, on its final defensive stand it didn’t allow an Illinois player past the 3-point line.

Michigan made a great play here, but before I let Nik Stauskas and Jordan Morgan explain what they saw, the question has to be asked: what on earth possessed John Groce, whose 2-3 zone had been working perfectly whenever it was deployed, discard the zone at the most critical defensive possession of the game? Only Groce knows the answer. Here is what Stauskas had to say about the play:

“I just came off a high ball screen,” Stauskas said at the podium after the game. “I was looking to be aggressive, and I raised up to shoot, and the guy guarding me was still chasing me, and the big came up to me, too, and J‑Mo rolled down the lane and he was wide open. I hit him with the ball and he laid it in.”

And for the big man’s perspective, we turn to Morgan:

“Well, coming out of time‑out, Nik told me he was going to shoot it regardless, so I wasn’t necessarily ready for the pass,” Morgan said. “But I don’t know, just watching the shot, there’s been times in the past where they’ve passed that, and we weren’t ready because they thought they were going to shoot. So just kind of watching the play, and then as far as catching it, I just put it on the rim and got a nice roll.”

Dylan noticed a stat of some significance to the ending of this game, and he mentioned it in his recap: Jordan Morgan and Tracy Abrams both had great looks at the basket from the post on their teams’ respective final possessions — Morgan made his, Abrams missed. As it turns out, the statistics regarding both players’ ability to finish in the post could have predicted this. Morgan has converted 75 percent of his post looks during the Big Ten season — Abrams has converted 29 percent of those looks. That being said, Abrams got a great look at the basket and Michigan got a lucky bounce that allowed them to escape, a la Nebraska on the road in the Wolverines’ first Big Ten game of the season. With the miss, Michigan moves on to the Big Ten Tournament semifinals, with Ohio State being its only obstacle on the road to the championship game.