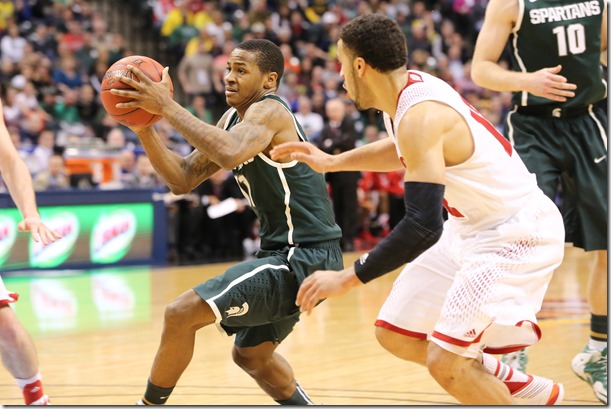 INDIANAPOLIS — No fan on either side of the Michigan-Michigan State divide needs reminding of how the rivalry between the Spartans and the Wolverines played out this season. Michigan notched a clean sweep of Michigan State, beating the Spartans home and away.

And now the in-state rivals will meet again in the Big Ten Tournament Championship Game.

It’s a script pulled from Hollywood, if it was written by a Michigan State fan. Keith Appling and Adreian Payne, the beloved Spartan seniors, will now get one final shot at redemption against the Wolverines.

“It doesn’t get any better than this,” Michigan State junior Branden Dawson said in the locker room after the Spartans defeated Wisconsin in the semifinal game on Saturday. “That’s what we’ve been talking about as a team. We know that tomorrow their fans are going to be tuned in and our fans are definitely going to be tuned in and they’re going to come out ready to play and so are we.”

Dawson perhaps occupies the greatest role in a possible reversal of fortune for the Spartans against Michigan. Dawson is the only player in the rotation to miss both games — Payne missed the first matchup but played in the second. The Gary, Ind. native could effectively negate the matchup advantage Michigan held when Michigan State was forced to put Keith Appling on Nik Stauskas.

That matchup yielded a number of 3-pointers for Stauskas, who was able to simply rise up and fire over the 6-foot point guard. Stauskas is undoubtedly a problem for the Spartans as he scored 44 points in two games against the Spartans on 16-of-25 (8-11 3pt) shooting.

Against Dawson, who stands 6-foot-6 and is every bit the athlete Glenn Robinson III is, those opportunities simply won’t be there. Dawson sees himself as providing an advantage for the Spartans on switches off ball screens — Michigan’s bread and butter offensively.

There’s also quite a bit of history between Dawson and Glenn Robinson III. The two played on the SYF Players AAU team, along with Michigan State guard Travis Trice.

“I didn’t get to play against those guys, and I’m ready,” Dawson said. “I’m excited to play against teammates — we all played on the same AAU team, me Glenn and Travis. So I think we’re excited and we’re definitely looking forward to it.”

“It’s a great opportunity. Two pretty good teams going head-to-head,” Appling said in the locker room following Michigan State’s semifinal win. “Those guys got the best of us in the regular season, so it’s a great opportunity for us to try to get some revenge and at the same time win the Big Ten Tournament Championship.”

While there has been a lot of focus on Tom Izzo consistently commenting on his team’s injury woes over the course of the season, it should be noted that the Spartan players themselves consciously avoided talking about injuries when recalling the past matchups between these two teams. While that was a major storyline after both games, the players are clearly not thinking about it.

Michigan State junior guard Travis Trice said the team is focused on now being healthy instead of making excuses for past games.

“I don’t want to make any excuses. They beat us,” Trice said. “You can’t take anything away from them, because who knows if their guys were sick or hurt or not feeling well. Only thing now is, we’re all the way back and if we play to the best of our ability, we’re the better team and we’ll win.”

Both teams will enter the championship game riding high. Michigan is playing its best basketball of the season, and even though it’s coming off a couple of close games its confidence level remains high. Michigan State feels it is finally getting back on track after devastating mid-season injuries and a run of mediocrity to close out the regular season.

Adreian Payne was almost giddy when he talked about the matchup on Sunday.