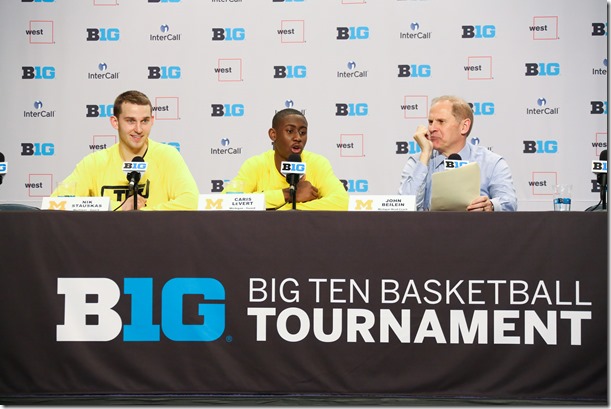 John Beilein, Nik Stauskas and Caris LeVert were on the podium after Michigan’s three-point win over Ohio State on Saturday. Read the press conference transcript after the jump. (Photo: Dustin Johnston)

COACH BEILEIN: I feel so fortunate right now. You look at so many of our games down the stretch here, they’ve ended just like this and the ball keeps bouncing our way. You only can have that type of luck if you have guys like these guys sitting next to me. They make enough smart plays to keep you in the game, and some games the ball will just bounce your way.
Really proud of how these two guys and everybody else had big roles in this wins, and now we move forward and try to win it all tomorrow.

Q. Nik, talk about the last basket you made, kind of the acrobatic scoop. Were you looking toward the corner or were you thinking shoot all the way on that one?
NIK STAUSKAS: I was thinking shoot the whole time, because I kind of knew Shannon Scott wasn’t going to take a charge. He was going to try to jump, and that’s a shot I work on all the time, just a little reverse lay-up with some spin on it. I was pretty confident going into that one.

Q. Caris, you’ve talked a lot about your recruitment and whatnot. This kind of big stage with all the eyes of the entire conference watching, how much does it help you to play with that chip on your shoulder?
CARIS LEVERT: It’s a dream come true for me getting to play against Ohio State in a big stage like this in a Big Ten Tournament. This was one of goals coming in is to win the championship, so it feels great.

Q. Against the tougher teams in the Big Ten you guys have done well. To get a win over Ohio State that you hadn’t beaten, I know you don’t pay as much attention, but guys, in what could be a rivalry game still, talk about the ability to do that.
NIK STAUSKAS: Yeah, well, coming into this game, for us we weren’t thinking about winning the Big Ten Conference Championship, the tournament. We were thinking about just beating Ohio State. This is a rivalry game, and we were just excited to be out here and have this opportunity today. And I think we did a great job of sticking together as a team even when they made their runs. I just think we did a good job today.

Q. Caris, on the rebound that you got off Nik’s missed three there that led to the free throw, was there something that you were reading based on the way that play was set up? It looked like you were cutting in there like almost — not designed necessarily, but —
CARIS LEVERT: I’m actually not supposed to offensive rebound at all. I’m supposed to just get back on the play. Coach Beilein just told me about that. But I noticed the whole game they weren’t really boxing me out because I’m supposed to be going back, so I noticed when he shot it, it came off a little short, so I knew I could go get the rebound.

Q. Coach, Lenzelle for Ohio State, 11.4 points per game, and he finished with only three. What was the key to keeping him from producing especially down the stretch?
COACH BEILEIN: You know, we studied their stats for the last five games, and some of it worked out pretty well, that he hadn’t been shooting the ball really well, so we really tried to contain him his set of — getting out too much on him. We also tried to just stay in a containing with Shannon Scott, and that really hurt us because he shot the ball like he’s probably never shot it in his career here. So that’s good for Ohio State next year because he’s good, but thank God he didn’t beat us today. But there was no special plan, just try to contain him, make to take tough twos.

Q. In the first half and in the second half, you had a big lead and then they made big runs to cut into it.
COACH BEILEIN: I think the big changes were the points off turnovers. As you know, any time Aaron [Craft] is out there or any of your other players, they had seven steals in the first half and we had seven turnovers. Steals are usually run-outs. They’re not a time that you walk and you take the ball back. You take the ball out of bounds and all of a sudden you set your defense.
The seven steals probably led to — I think they had 22 points or something at halftime off — no, 13 points in turnovers. And in the second half they got three or four more. We did have some shots that didn’t drop, but I was happy with our defense. We played exceptionally well in those first — the start of the game. That couldn’t last.

Q. You had, I think, end of the first half a pretty significant scoring lull and again in the second half, almost ten minutes. Was there anything about their defense in those particular periods that bothered your offense?
COACH BEILEIN: Well, number one, it probably is what I just spoke to. They probably took the ball from us and created turnovers. So you don’t get a shot if you turn it over, so that’s going to lend to that.
You watch them and you’ve got two teams playing right now, Michigan State and Wisconsin. Those are the three best defensive teams in our league. They’re just really difficult to score points on, and that’s why — we had 70 points on them, so there’s going to be those lulls. But when you get it going, if you can keep it going to, get to seven points against Ohio State, that doesn’t happen very often.

Q. Ohio State was the best team in the conference as far as three-point defense, and you guys came out and shot the lights out. Was there something you guys were doing especially well as far as spacing or was it just a day where shots went in?
COACH BEILEIN: We’re fortunate because we have — when you add Zak Irvin to it, we have really four or five guys, Spike [Albrecht] is six, that can come off the bench and make threes. So we’ve got six of our eight that play can make threes. And, as a result, when you have that many guys — and pretty much they have different green lights, but they have green lights. So when they’re shooting it well, we can spread people out.

Q. I just wanted to ask, obviously you’d rather have him on the floor, but how has it been having Mitch [McGary] on the bench? Does he ever slip into an assistant coach type role?
COACH BEILEIN: Actually, yesterday, he huddled me up with one of the players explaining to the player that he had to talk more in our switching, that he had noticed he wasn’t talking loud enough. I don’t know why I had to be in that conversation, but he wanted me in that conversation, as well.
My concern with Mitch [McGary] is he is going too hard in helping our team with his enthusiasm, that we don’t want that back to get hurt any more. We want him to be completely healthy, but he can’t stop himself.