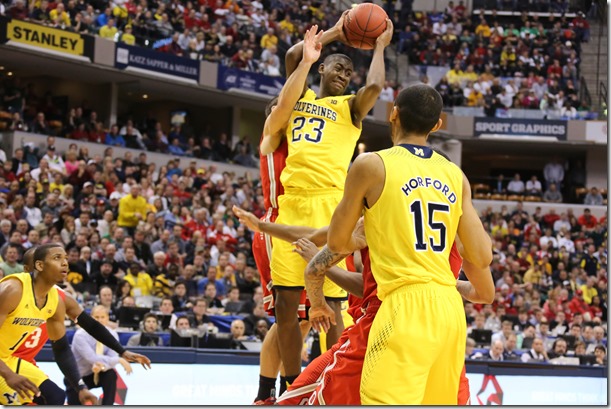 INDIANAPOLIS — Caris LeVert wasn’t supposed to grab that offensive rebound. You know the one I’m talking about — the one on Michigan’s final offensive possession, the one he grabbed over two Buckeyes. It was the play that, essentially, sealed Michigan’s win over Ohio State.

“I’m actually not supposed to offensive rebound at all. I’m supposed to just get back on the play,” LeVert said. “Coach Beilein just told me about that. But I noticed the whole game they weren’t really boxing me out because I’m supposed to be going back, so I noticed when he shot it, it came off a little short, so I knew I could go get the rebound.”

He could and he did. LeVert rose up and snagged the ball, kicking it back out to Spike Albrecht, who was intentionally fouled. You know the rest: the sophomore made the first, missed the second; Aaron Craft bobbled his shot on the way up on the potential game-tying three; game over.

With the final buzzer, Michigan officially punched its ticket to the Big Ten Championship Game on Sunday. It will be the first time they’ve reached the final game since the Wolverines took home the championship in the first year of the tournament’s existence in 1998. Saturday’s win was also the first time Michigan has ever beaten Ohio State in the Big Ten Tournament.

As it has proven all season, Michigan is an uncommon team. That is most apparent when the Wolverines go on runs like the ones at the beginning of each half in their win over Ohio State. Before even four minutes had gone by in the game, Michigan had taken a 15-2 lead over the Buckeyes. In the opening minutes of the second half, the Wolverines took a four-point lead and made it 11 in under two minutes.

These dazzling displays of offensive dominance make this team fun to watch, and it is part of what separates them as an uncommon team. But what makes this season’s Michigan squad so unique, what has allowed it to do things Michigan teams haven’t done in a very long time — beat Wisconsin on the road, beat Ohio State on the road, go to the Big Ten Tournament final, etc. — is its ability to make uncommon plays.

Namely, plays like the one Caris LeVert made with under a minute left with the Wolverines clinging to a slim lead against Ohio State at the Banker’s Life Fieldhouse. These are what Michigan’s coaching staff refers to as “winning plays.”

“They’re competitive kids, and it’s a winning play,” Michigan assistant LaVall Jordan said in the locker room after the game. “We talk about just making winning plays. You’re going to have to do some things that might not be in the scheme of what we do. But if you’re doing it for the right reasons, that’s what you have to do. Especially in March. You’ve got to find a way to play tomorrow.”

If you’ll recall, Michigan players have been making “winning plays” all season. The layup at the buzzer by Glenn Robinson III to win at Purdue is the most obvious play that comes to mind. Nik Stauskas’s step-back 3-pointer against Wisconsin on the road is another. Jordan Morgan’s massive offensive rebounds against Purdue or Minnesota. Derrick Walton’s free throws down the stretch to doom Michigan State, his and-1 layup against Nebraska on the road, the list goes on and on.

And we can add LeVert’s offensive rebound, the one he wasn’t supposed to get, to the list.

Michigan’s offense is fun and potent and reliable. But these players aren’t robots, and great defensive teams like Ohio State can occasionally force the Wolverines to muck it up. John Beilein said after the game that the offensive problems Michigan encountered were mostly due to turnovers, and he has a point. Michigan turned the ball over on almost 20 percent of its possessions on Saturday, and seven of them occurred in the midst of Ohio State comebacks. Turnovers are especially lethal against the Buckeyes because they lead to points and let a struggling offensive team off the hook.

The Wolverines have the ability, even when play turns ugly and their vaunted offense is out of rhythm, to make winning plays at the right time. This is why they’ve won six road games in the Big Ten regular season, and it’s why they’re playing on Sunday. Beilein sees this as a combination of luck and skill.

“It’s going to be a lot of luck in those situations,” Beilein said in the locker room after the game. “We’ve been unlucky. I was thinking about Evan Turner’s 3-point shot. … We’ve been lucky and we’ve been fortunate, but at the same time, we have made our own luck. We have kids that are really calm and cool through adversity.”

The word for this is clutch. Michigan has been extremely clutch this season. It means they make the right read at the right times and make winning plays. Sort of like LeVert did in the final minute against the Buckeyes on Saturday.

“He took a chance there, and that’s what players do,” Beilein said. “That’s why he’s had such a successful year. He runs our patterns great, but he breaks out and is a player when he needs to be.”

There are all sorts of words to describe what allows Michigan to win these close games. Whether it’s being clutch, making plays at the right time, or getting lucky, Michigan has developed an instinctual impulse to make winning plays. In fact, that’s the word LeVert used after the game. When he was asked why he spurned the game plan and leapt for the offensive rebound, the sophomore kept it simple.