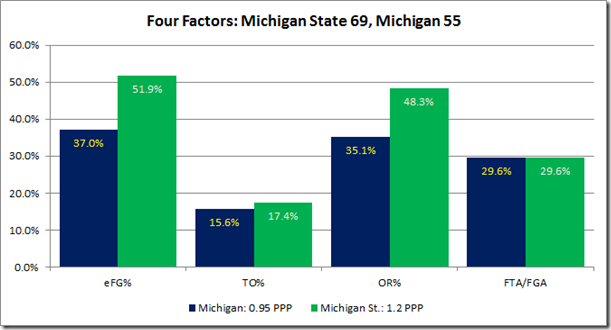 Michigan State was just too much for Michigan on Sunday in Indianapolis. The Spartans were desperate for this one and the Wolverines looked like a team that had just run out of gas.

Michigan started the game off on the wrong foot as Jordan Morgan and Jon Horford picked up three fouls in the first 96 seconds of the game. Morgan and Horford combined for five first half fouls in seven minutes of playing time. Morgan, Michigan’s defensive anchor, played only four minutes in the first half.

Redshirt sophomore Max Bielfeldt battled for the Wolverines, but he was no answer for Michigan State’s front line. The Spartans overwhelmed Michigan on the glass and Michigan fell behind quickly after its early five-point lead disappeared.

The Spartans seemed to win every 50-50 ball and Michigan made a number of uncharacteristic mistakes. The Wolverines were sloppy with the ball and shot just 36% on twos and 26% on threes.

Every time Michigan would threaten – the Wolverines had the lead down to seven points with two minutes to play in the first half – the Spartans would make just enough plays to keep them at arm’s length. At the end of the first half it was a Gary Harris dunk at the buzzer, after Michigan threw away an opportunity to cut the lead to five. Late in the second half, after the Wolverines threatened to cut the lead to single digits, Adreian Payne iced the game with a three-pointer with 3:08 to play.

Michigan had the better season, but on this day Michigan State was the better team.

Michigan’s offense stopped in its tracks for the first time since a February 2nd loss at Indiana.

Michigan State played a great defensive game, but there were some tired legs out there as well. Both teams were a combined 8-of-40 from three-point range, just 20%. Michigan’s two worst shooting performances this season came at the end of a condensed tournament – the third game in four days in Puerto Rico vs. Charlotte and the third game in three days vs. Michigan State.

Michigan made mistakes that it just hasn’t’ made this season. The Wolverines turned the ball over on just 16% of their possessions, but nine turnovers led to 18 Michigan State points.

Nik Stauskas (1-9 on two-point attempts) and Caris LeVert (2-of-6 on 2-point attempts) both struggled to adjust to the physicality of the game and had very little success attacking the basket. There weren’t many bright spots for Michigan, but Jordan Morgan battled in the second half on the offensive glass and Derrick Walton played another solid game against the Spartans. Bielfeldt provided some tough minutes, but he missed the three-point attempts (a shot that Beilein claims he makes consistently in practice) and struggled on the glass against Michigan State’s athleticism.

The Wolverines were abused on the defensive glass after dominating in that department during the first two meetings. Branden Dawson made an impact (1 offensive board), but this was just a poor rebounding effort by Michigan. Michigan State rebounded 48% of its missed shots and scored 14 second chance points.

This was a game that Michigan State desperately needed and Michigan could have used. The loss hurts, it was a chance win another trophy, but the Wolverines will have to have amnesia with a quick turnaround before Thursday’s game in Milwaukee.

Michigan was the dominant team in the Big Ten this season, winning 17 of 21 games against league foes, and that’s an almost miraculous achievement after a 6-4 non-conference start to the season and losing Mitch McGary.