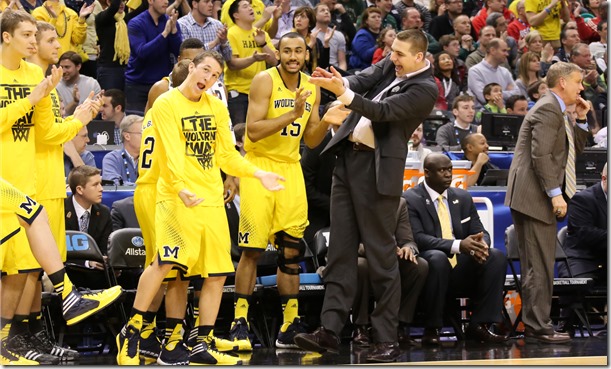 The selection show is just hours away and Michigan is on the verge of its first No. 1 seed since 1993.

Almost all notable bracketologists have moved Michigan up to the No. 1 seed line in the last 24 hours after weekend events played out perfectly for the Wolverines. Michigan handled its business with wins over Ohio State and Illinois while Villanova, Wisconsin and Kansas all dropped pivotal games.

“Michigan is clearly the front runner [for the last No. 1 seed] at this point,” ESPN’s Joe Lunardi said on SportsCenter last night. “You are talking about a team that won the Big Ten outright by [three] games and has 13 top 50 wins, second most in the country to Kansas at this point. If the Wolverines win, and even if they lose a close one to Michigan State on Sunday, due to the timing of that Big Ten Championship right before the Selection Committee goes on recess I think you’ll see Michigan as the No. 1 seed in the East.”

The timing will be key. Michigan and Michigan State tip off at 3:30 p.m. and brackets are set to be unveiled at 6:00 p.m. Generally, the committee starts to determine seeding early in the process, but they are allowed to make multiple brackets for alternate scenarios. Committee chair Ron Wellman explains:

How impactful can whatever happens in a championship game that late in the week or in the process affect what the Committee’s decisions are?

It can have an impact obviously depending on which teams are in that championship game. The Committee will be prepared for that eventuality if it does occur by having a number of contingency plans, whether it be selection, seeding or bracketing.

There have been a number of years where there have been four or five brackets active very late in the game, whether it be the SEC championship or other reasons. But the Committee will be well prepared for any possibility late Sunday afternoon.

There’s nothing stopping the committee from having a bracket if Michigan wins and if Michigan loses, but they could also just decide that the Wolverines are deserving of the No. 1 seed win or lose. That seems to be a possibility at this point.

Sports Illustrated’s Michael Beller agrees, tweeting “I think Michigan deserves that final No. 1, win or lose. Resume speaks for itself.”

CBS Sports’ Gary Parrish also thinks the Wolverines are a No. 1 and tweeted,”Here’s my prediction: Michigan gets the fourth No. 1 seed today regardless of whether it wins or loses the Big Ten title game.” John Gasaway echoes his feelings and predicts that the committee will report afterward that Michigan’s seed was decided before today’s game.

Jerry Palm isn’t so sure:

At the moment, Big Ten regular-season champion Michigan is in that spot. Only Arizona and Kansas have more top 50 RPI wins than the Wolverines, who have 10, seven of those away from home. They have seven losses, so they may not be able to take another one and be able to hold onto that spot.

The other candidates to steal Michigan’s No. 1 are Villanova, the Duke-Virginia (1 p.m., ESPN) winner, Louisville and possibly even Wisconsin.  Those teams all have pretty obvious flaws. Louisville has a weak schedule, Villanova only has six top-50 wins, Virginia only beat three tournament teams in ACC play, and Duke’s best road win is at Pitt.