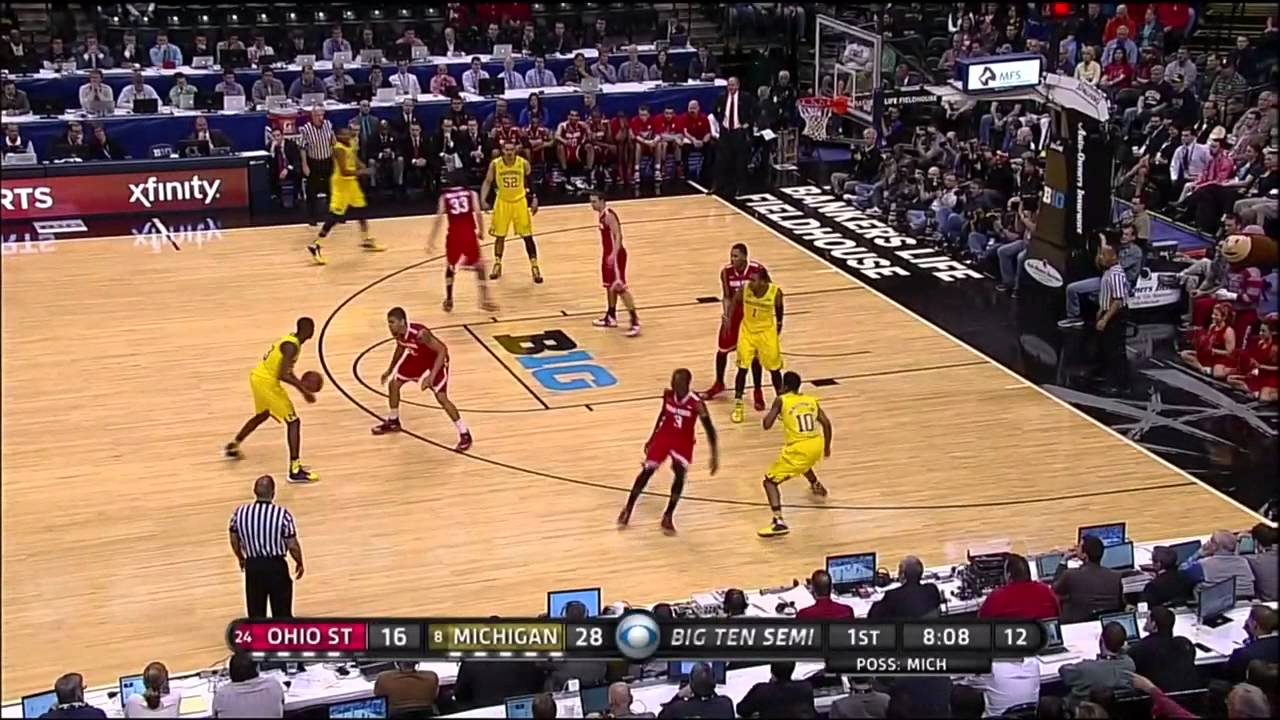 This first half of Michigan’s 72-69 victory over Ohio State in the semifinal game of the Big Ten Tournament was eerily similar to its win over Illinois just one game before. In both games, the Wolverines started off extremely hot — followed by an abrupt cool-off later in the period. In this sequence, we can see Michigan build its lead up to 16 points, the highest it was all game. The first basket, a 3-pointer by Derrick Walton, comes off a broken play when Zak Irvin chases down the loose ball in the corner. On the second play, Michigan gets out and runs off an Ohio State miss. The rebound is tapped out by Jon Horford to Irvin, who gets the ball to Caris LeVert. LeVert gets fouled going to the hoop and makes one of his two free throws — something that would become a theme on the night. Later, LeVert takes matters into his own hands and pulls up at the free throw line for the midrange jumper over LaQuinton Ross. Dylan mentioned LeVert’s struggles from that range in the recap, and it was good to see him knock one of them down. Finally, Glenn Robinson III gets a hand on the ball during an Ohio State drive and Zak Irvin pushes it upcourt to Caris LeVert with a great pass. LeVert takes it in for the dunk. Everything went right for Michigan for the first 13 minutes of this game, and the Wolverines were able to build up an impressive lead. Unfortunately, much of it would slip away before halftime.

Ohio State plays great defense. That is a fact. The Buckeyes are ranked first in defensive efficiency in the Big Ten and fourth in the country. Their steal percentage is number one in the country and they force the 15th-most turnovers. All of this is to say Michigan probably wasn’t going to keep scoring at a rate 1.54 points per possession, the pace it kept early in the first half.

“I think the big changes were the points off turnovers,” John Beilein said of his team’s offensive struggles late in the first half after the game. “As you know, any time Aaron [Craft] is out there or any of your other players, they had seven steals in the first half and we had seven turnovers. Steals are usually run-outs. … We played exceptionally well in those first — the start of the game. That couldn’t last.”

One of the ways Ohio State forced turnovers was through its inbounds play defense. This same strategy upended Nebraska last night, and it nearly got Michigan on Saturday. On the first play, Caris LeVert hits Glenn Robinson III in the corner and the sophomore gets trapped immediately and turns it over. Later, with Amir Williams guarding the inbounder, LeVert tries to throw the ball over the top of the defense but it’s stolen and Jordan Morgan has to commit a foul to prevent a layup. Finally, Derrick Walton shows the dangers of driving into the post against Ohio State without knowing exactly what you’re doing with the ball. These missteps caused a first-half lead that was once 16 to dwindle down to four points at halftime.

3) Michigan starts off the second half hot

Michigan came out strong in the second half similarly to how they did in the first. The Wolverines were knocking down shots right off the bat — they hit their first three 3-point attempts of the half in succession, which is what we see in the video above. On the first play, Nik Stauskas shows just what he’s capable of with the slightest sliver of daylight. Jordan Morgan hands the ball off as he disrupts the sophomore’s defender, while Morgan’s defender jumps to contest. With one Buckeye in front and one on his side, Stauskas rises up and buries the three. The next play is one Michigan runs often, with Derrick Walton setting a down screen for Caris LeVert. LeVert can elect either to use the screen or cut baseline. This time, he cuts baseline. What does Ohio State do? LeVert’s defender thinks he’s using the screen, so he tries to cheat. This forces Walton’s defender to help on LeVert, leaving Walton open drifting to the 3-point line. It’s great action, and is good for at least one or two open looks per game. Finally, Stauskas just abuses Lenzelle Smith Jr. with a crossover before burying the step-back three in his face.

“We’re fortunate because we have — when you add Zak Irvin to it, we have really four or five guys, Spike [Albrecht] is six, that can come off the bench and make threes,” Beilein said after the game. “So we’ve got six of our eight that play can make threes. And, as a result, when you have that many guys — and pretty much they have different green lights, but they have green lights. So when they’re shooting it well, we can spread people out.”

Sam Thompson secured the 68-65 lead for Ohio State with a little over four minutes left in the game. The Buckeyes scored exactly one point the rest of the game, a free throw from LaQuinton Ross late. While Michigan wasn’t playing particularly well offensively, it could certainly top that. Nik Stauskas hit the first shot in this sequence in answer to Thompson’s make, a step-back that looked like a three but was really a long two. Next, Derrick Walton corrals the defensive rebound off an Ohio State miss and immediately pushes it upcourt. The freshman is so fast getting up and down the floor that this has developed into a legitimate offensive weapon for the Wolverines. Walton was fouled on the take to the basket but it wasn’t called — luckily for Michigan, Ohio State was called for a foul on the offensive rebound and Glenn Robinson III hit both free throws. On the final play of the sequence, Stauskas throws up a reverse lay-in that usually only makes an appearance in pre-game warm-ups. Here’s what Stauskas had to say about the acrobatic reverse:

“I honestly didn’t know if it was going to go in, it was kind of bouncing around on the rim. I’m just happy it went down,” the sophomore said after the game. “It’s a reverse layup, it’s with one hand. You just have to put some English on it and hit it high off the glass and it just kind of spins in.”

These points gave Michigan a 3-point lead heading into the final minute of play.

As we’ve made pretty clear, this was the play of the game for Michigan. Nik Stauskas took the last shot to put the game away, as he should, but just missed on the 3-point attempt over Lenzelle Smith Jr. As LeVert said after the game, he wasn’t supposed to crash the boards on this play — but as you can tell from the video, it didn’t look as though he thought about doing anything else. LeVert darts by Sam Thompson into the paint and the Buckeyes just don’t get a body on him. He anticipates the ball’s location coming off the rim perfectly and grabs it before kicking the rebound out to Spike Albrecht. After the game, Michigan assistant coach LaVall Jordan joked about LeVert’s decision.

“Maybe we need to, as a staff, talk about who gets to go rebound and who needs to get back in transition,” the coach said with a laugh.

He was joking, but maybe it’s true — LeVert is one of the team’s better rebounds and grabbed eight on Saturday.