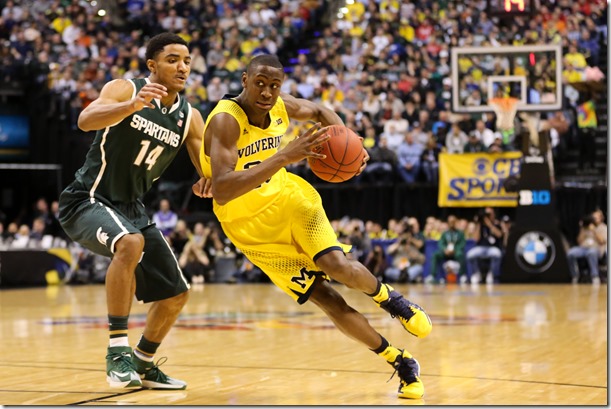 INDIANAPOLIS — Michigan is the No. 2 seed in the Midwest bracket. The bevy of talented, dangerous teams that join them in the bracket almost makes the number one seed, Wichita State, an afterthought. Duke and Louisville are the number three and four seeds in the region, respectively.

But before Michigan can deal with those teams, it must deal with the team it faces in its first game: the Wofford Terriers of the Southern Conference.

So, Jordan Morgan, what do you know about Wofford?

“Nothing,” the redshirt senior said when asked that question after the selection show on Sunday. “Not a thing.”

His ignorance will be short-lived. John Beilein said tomorrow the team will not practice, but that it will be a “super study day” for the Wolverines. That means lots of film on the Terriers, including their Southern Conference semifinal and final games.

Beilein also admitted to not knowing much about Wofford, but he does have a connection to the team — Beilein’s former point guard at West Virginia, Darris Nichols, joined Wofford’s coaching staff this summer.

“Darris Nichols, one of the assistant coaches, is one of the smartest, brightest point guards I have ever had,” Beilein said on Sunday. “Now I wish he really didn’t understand our offense at all, but he knows everything about us, so we have a challenge with a guy on the other bench who knows a lot of what we do.”

Michigan has arrived at this point of the progression of its program, where the big question on Selection Sunday isn’t whether or not it will reach the NCAA tournament, but whether the Wolverines will be a one seed or a two seed. They got their answer on Sunday, with the committee deciding to give the Wolverines the two seed in the Midwest bracket.

Jordan Morgan will be going to his fourth NCAA tournament next week, which makes him the team’s resident bracket expert. He broke down the likely scenario Michigan presented the selection committee with.

“To be honest, I figured we’d get the two seed in the Midwest region, just thinking about it,” Morgan said. “I knew we were kind of on the fence with those teams that were between a one and a two. Why give us a one seed with locations that had us traveling a lot when you could give us a two seed and keep us close to home? I think that’s what happened.”

While Morgan was mulling Michigan’s seeding, John Beilein was busy not caring one ounce about it. The coach entirely dismissed the importance of seeding, along with considering the other teams in his team’s region.

“There is so much discussion on that that is just wasted effort to me,” Beilein said. “What is the big deal? Seriously. I’m sure they were trying to figure out, who are these last three seeds? Where are the first three? They’re all the same. Take the top 12 teams, and is there really much of a difference between the one, two, three … there’s not huge differences. Teams that were number one, just a month ago, in the country, are four or five seed. They’re the same teams. They’re good.”

Glenn Robinson III isn’t too worried about his team bouncing back after a deflating loss to Michigan State in the championship game of the Big Ten Tournament.

After all, the Wolverines faced a similar situation last season after dropping their second-round game to Wisconsin. We all know how that turned out.

“We’ll learn from it and we’ll be a better team for it,” Robinson said of the loss to the Spartans. “We had this type of game last year against Wisconsin, came back hungry and got to the championship game.”

John Beilein said that while the team was down following the loss, he saw their spirits rise when they watched the selection show.

“I think we snapped out of it like that, and we were really down after the game,” Beilein said. “And then all of a sudden, the media’s done, and then it’s, hey, let’s watch the selection show. … I’ve been in that room when you lost a championship and it meant you weren’t going anywhere or maybe the NIT. This is huge, to walk from that room and see us in the NCAA tournament, it’s terrific.”