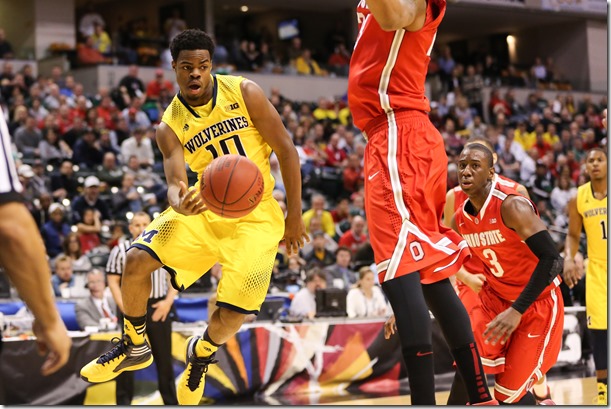 The Midwest Region was quickly labeled the most challenging in the NCAA tournament on Sunday night. Three of last year’s Final Four teams are in the Midwest  and the bracket is filled with blue bloods like Duke, Louisville and Kentucky along with undefeated Wichita State. Michigan drew a two seed, but won’t have a cakewalk back to the Final Four. Here’s a rundown of assorted media reactions to Michigan’s draw, region and Final Four chances.

Michigan (21). Pomeroy offensive rank: 3. Pomeroy defensive rank: 103. Strengths: Few teams can shoot from the perimeter like the Wolverines, who have up to six dangerous 3-point bombers. They have also been excellent in late-game execution, which is essential at tournament time. John Beilein has done masterful work remodeling this team after the early loss of center Mitch McGary, and a return Final Four trip would not be a surprise. Concerns: That defensive ranking is glaring – but Michigan was similarly ranked last year and made the title game. Few teams are as battle-tested as the Big Ten regular-season champions.

The lowest-seeded school to make the Sweet 16 will be … Arizona State. If last impressions are lasting, you think I’m nuts right now. The Sun Devils lost back-to-back games to close the regular season then got blown out by Stanford on Thursday in the Pac-12 tournament. But Jahii Carson is good enough to get hot and spark a few upsets, and Michigan seems more beatable than Wichita State, Duke or Louisville.

Much more from around the internet after the jump.

John Gasaway is selling the Arizona State-Texas winner, advising you not to pick them to advance to the Sweet 16:

The Sun Devils caught a break in being bracketed with a Longhorns team that did not perform well late in the season. Still, ASU ranked No. 9 in Pac-12 play in points per possession, as Herb Sendek’s men connected on just 45 percent of their 2-pointers. ASU also stays off the offensive glass as a matter of stylistic preference. Sendek’s defense is good, but it won’t be good enough to overcome an under-powered offense.

As for Texas, last week I put together lists of the 10 hottest and coldest late-season teams in the country, and let’s just say Rick Barnes’ team was No. 1 in one of those rankings. Not a good sign heading into the tournament. Worry all you want about Michigan’s defense, but the Wolverines should be able to handle the Texas-ASU winner.

Jerry Palm and Gregg Doyel picked Michigan to make the Final Four. Michigan has 30/1 odds to win the tournament, per Vegas Insiders. The Midwest region has the toughest four seeds, but the lower seeded teams aren’t as good. Here’s a good graphical look at how far teams are being picked to advance.

NBC Sports names Nik Stauskas as a player that you want to have the ball in crunch time:

4) Nik Stauskas (Michigan): There aren’t many perimeter shooters better than Stauskas, who’s shooting 47.6% from the field and 44.9% from beyond the arc. And his improved ability to beat teams off the dribble has made Stauskas a tougher cover in his sophomore season. He’s definitely a player to trust in the final minutes of a tight game.

Michigan would have been a No. 1 seed in the East if it beat Michigan State.

Mike DeCourcy picks Duke to survive the Midwest bracket at the Sporting News:

Best potential team matchup: No. 2 Michigan vs. No. 3 Duke in the Sweet 16. Yes, of course, you saw this before and it was not close. The Michigan team that went into Cameron was not as fluid and confident as this team. And the game will be in Lucas Oil Stadium, which is a good deal less intimate and should be a bit more neutral in terms of audience support. Plus there’s the fact that neither of these teams is much on defense—Duke is No. 102 in efficiency, Michigan 104—so it could be a run-and-gun, run-up-the-score affair.

The pick: Duke. The only team in the region with a similar talent level is Kentucky, which might never be a concern for the Blue Devils. Indeed, Michigan can score with anybody, and Duke will have trouble dealing with that. But Michigan’s defensive issues are just as profound and its talent is a smidge lighter.

Draft Express hits on the NBA Draft implications of Michigan’s opening round pod:

Jahii Carson will need to rev into high gear if he’s to ignite his faltering draft stock. The speedster has struggled with efficiency both inside and outside the arc as of late, with question marks about his off-court intangibles also taking a toll on his stock. Approaching the final games of his college career, regardless of the result of this weekend, the best way for him to get back on track with scouts is to win games. A matchup against an overseeded Texas team which has been in a tailspin as of late is a great place to start, but a likely contest with #2 Michigan will be very difficult for anyone to handle.

Nik Stauskas is one of the best offensive players in college basketball, but fellow backcourt mate Caris LeVert has some nice buzz going after a very strong showing in the Big Ten portion of Michigan’s schedule. He looks like more of a 2015 prospect at the moment, but a deep March run could change that potentially.

The newly re-launched FiveThirtyEight gives Michigan a 14.2% chance at reaching the Final Four.

Myron Medcalf predicts that no Big Ten teams will make it to Dallas:

No Big Ten team in Dallas — In recent seasons, the Big Ten has been anointed as the premier conference in college basketball. And it’s hard to argue against that, if we’re talking about the regular season. But the league still hasn’t collected a national championship since Michigan State won the crown in 2000. That drought will continue, even though Tom Izzo has taken every four-year player he’s coached at MSU (see Keith Appling and Adreian Payne) to the Final Four. Michigan, Michigan State and Wisconsin all have a shot, but it won’t happen this year.

Michael Beller writes that the Midwest is the most overrated region, but says Duke and Michigan are legit contenders:

Michigan and Duke, the No. 2 and No. 3 teams in the region, respectively, are both legitimate threats to make the Final Four, but the Shockers will only have to beat one at most to get to Dallas, and they reached last year’s Final Four by knocking off both the No. 1 and 2 seeds in their region. It feels safe to narrow the Midwest’s number of contenders to reach the last weekend in April to just three teams: the Shockers, Wolverines and Blue Devils. That makes it the weakest of the four regions.

Michigan (13): Michigan is the inverse of Cincinnati and San Diego State, a flowing, gorgeous offensive team hampered by its frequent defensive lapses. But last season, the Wolverines entered the tournament with a top-five offense, a so-so defense and a singular perimeter star and nearly won the national title. Nik Stauskas might be more productive than Trey Burke was last season. Michigan could suffer an upset early, but it could just as easily storm its way to Dallas.