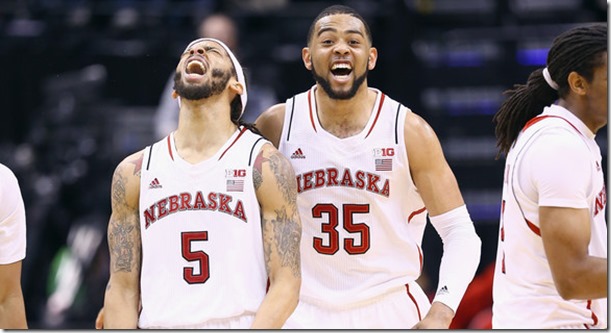 The Big Ten is down one team from last season, but the conference is still sending an impressive six teams to the NCAA tournament. Minnesota’s stumble to the end of the regular season, coupled with a disappointing showing in the Big Ten Tournament, meant the Gophers will be on the outside looking in. On the opposite end of the spectrum, Nebraska’s late-season surge propelled them to a first-round bye in the conference tournament and the Huskers made it into the field of 68 despite a disappointing loss to Ohio State to close out the Big Ten season.

Michigan comes in as the top-ranked Big Ten school, a two seed in the Midwest region, but the experts aren’t high on the Wolverines given the difficult challenges at the top of the Midwest. By far the hottest team in the conference — and maybe the country — is Michigan State. With a drubbing of Michigan in the Big Ten Tournament Championship Game on Sunday, the Spartans appear to be hitting their stride at the exact right time and seem poised for a deep tourney run, even as a four seed. Wisconsin was bumped from the Midwest region by Michigan, but still find themselves with a two seed. Ohio State grabbed a six seed and will be taking on an intra-state foe in the Dayton Flyers. Iowa brought up the rear of the Big Ten, being relegated to a play-in game in Dayton tonight for the final 11 seed in the Midwest bracket. After the jump we preview each Big Ten team’s opening matchup.

We have already taken an opening glance at Wofford. Michigan will obviously be considered a heavy favorite in this game. Essentially, the Terriers are the third-best team in the Southern Conference. Wofford doesn’t do much of anything particularly well, but they like to force turnovers, while Michigan is one of the most sure-handed teams in the country. One of Michigan’s weaknesses — offensive rebounding — may be helped given Wofford’s lack of size underneath; the Terriers’ tallest rotation player is an inch taller than Glenn Robinson III. Despite losing to Michigan State in the Big Ten Tournament finale, Michigan is still a hot team having won its past seven games prior to that loss. This one shouldn’t be close. KenPom: Michigan 71, Wofford 58 UM Hoops pick: Michigan

American won the Patriot League Tournament Championship against Boston University in a game no basketball fan should ever be subjected to. Boston U scored only 36 points in the game thanks to a 1-for-17 effort from beyond the arc and not-great shooting from two-point range. Boston could only manage a putrid 0.68 points per possession, which meant American’s 0.98 ppp was good enough for a 20-point victory.

At least some of the credit for Boston’s performance has to go to American’s defense — the Eagles hold the 45th-best defensive efficiency rating in the country and were the best defensive team in their conference. Offensively, American’s effective field goal percentage is ranked sixth in the country. This would make it a great offensive team if it didn’t turn the ball over so much — the Eagles cough it up on 22.8 percent of their possessions. Wisconsin will enjoy American’s slow pace and will be content to let the Eagles beat themselves on the way to an easy victory. KenPom: Wisconsin 66, American 58 UM Hoops pick: Wisconsin

A dizzying amount of analysts have picked Michigan State to go to the Final Four and even to win the whole thing. They have good reason: it appears the Spartans are rounding into the form most people thought they would take at the beginning of the season, before being derailed by numerous injuries. With everyone back and playing its best basketball since beating Kentucky in the second game of the season, Michigan State feels severely under-seeded. While the Spartans should take care of Delaware, the Blue Hens are nothing to sneeze at. They won both the regular-season title and the conference tournament for the Colonial Athletic Association. Delaware is one of those rare teams that plays very fast — it has an adjusted tempo of 72.1 possessions per game — but doesn’t turn the ball over. The Blue Hens are the fourth-best team in the country at holding onto the ball, with a Michigan-like turnover percentage of 13.5. If Delaware wants to run with Michigan State, the Spartans will happily oblige, and they’ll surely take advantage of the Blue Hens’ inability to rebound on either end. KenPom: Michigan State 85, Delaware 73 UM Hoops pick: Michigan State

Ohio State will be taking on some familiar faces in Buffalo. Not only will the Buckeyes be playing a school from their own state in Dayton, the Flyers even have a former Buckeye on their roster — junior guard Jordan Sibert. Dayton sports an efficient offense and a not-great defense and plays at almost the exact same pace as Ohio State. The Flyers got a key win early in the season against Gonzaga and followed that up with wins of KenPom top-50 teams George Washington and Saint Louis, as well as a quality win over Massachusetts. Even though the Buckeyes struggle on offense, they should be able to score on Dayton’s so-so defense while shutting down the Flyers with their tops-in-the-Big Ten defense. The Flyers are a middle-of-the-road team when it comes to turning the ball over, which means Aaron Craft and Shannon Scott should be licking their chops looking at this matchup. They may start slow offensively, but the Buckeyes should win this one. KenPom: Ohio State 67, Dayton 63 UM Hoops pick: Ohio State

Despite a loss to Ohio State in the second round of the Big Ten Tournament, Nebraska is still one of the hottest lower-seeded teams heading into the Big Dance. The Cornhuskers were left for dead after losing five of their first six Big Ten games, but came roaring back thanks to an improved defensive focus. Nebraska scratched and clawed its way into the field of 68, even beating out Iowa and leaving the Hawkeyes to a play-in game in Dayton. Now, it faces Baylor in San Antonio. The Bears will look to slow the pace against the Huskers. While their effective field goal percentage isn’t terribly high, they make their living on the glass with an offensive rebounding percentage of 41.1 percent, ranked third in the country. How do they do it? Simple: height. Baylor’s effective height is ranked eighth in the country and the Bears boast a starting lineup with big men standing 6-foot-9 (Cory Jefferson) and 7-foot-1 (Isaiah Austin). They also bring in offensive rebounder extraordinaire Rico Gathers off the bench — the sophomore is Mitch McGary-esque under the rim with an offensive rebounding percentage of over 18 percent. If the Huskers can hang with Baylor on the boards, they have a chance. KenPom: Baylor 68, Nebraska 66 UM Hoops pick: Nebraska

This doesn’t look like a great matchup for the Hawkeyes. Iowa is entering the NCAA tournament in almost a zombified state — Iowa has lost six of its past seven games, including an opening-round Big Ten Tournament loss to lowly Northwestern. Iowa can’t really guard anyone lately, and its offense isn’t scoring at the rate it did earlier in the season. On top of all that, the Hawkeyes are facing a tough Tennessee team. The Volunteers won their last five games before falling in a close game to Florida in the semifinal of the SEC Tournament. Looking at how they make their living, it appears Tennessee does much of what Iowa does, but a little bit better. Like Iowa, the Volunteers rely on rebounding — Iowa is 14th in the country in offensive rebounding percentage, Tennessee fifth; Iowa is 64th in the country in defensive rebounding percentage, Tennessee 20th. The Volunteers are a very good defensive team — better than, say, Northwestern, who forced Iowa to shoot under 40 percent from two and 25 percent from three. Tennessee should walk away from this game with the final 11 seed in the Midwest bracket. KenPom: Tennessee 75, Iowa 73 UM Hoops pick: Tennessee