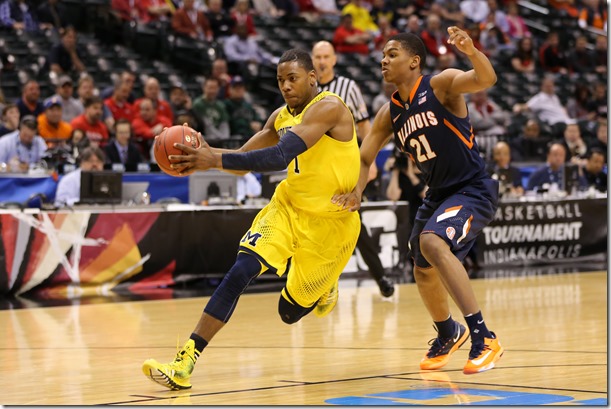 It’s no secret: Michigan’s defense hasn’t been very good this season, especially in the Big Ten.

Prior to the first game of the NCAA tournament is a popular time for fans to re-assess and dissect their teams’ strengths and weaknesses, and Michigan’s defense is a pretty glaring weakness for a team with otherwise solid Final Four credentials. The Wolverines have the third-best offense in the country, but their defense is ranked just 104th.

Michigan’s defense, or lack thereof, means that one bad offensive performance could doom the Wolverines. On The Michigan Insider on Tuesday morning, John Beilein talked to Sam Webb about his team’s defensive struggles.

It makes sense that defensive chemistry would be the major issue for Michigan. The Wolverines switch on almost everything and rely on constant communication to make sure they don’t get lost on screens and that help is where it’s supposed to be. But the most glaring obstacle to that defensive unity, Beilein said, is Michigan’s youth.

“This is very common of young teams,” Beilein said. “There’s not many that are younger than us — you just lose focus on what is important in defense. You need veterans to really understand and look at the big picture here. We have to keep focused on defense or we will go home very early.”

That need for a veteran presence is one of the reasons why Jordan Morgan is so indispensable for Michigan. The redshirt senior knows the defense inside and out and is constantly directing traffic on that end of the floor. All the evidence needed for his importance defensively was provided in Michigan’s most recent matchup against Michigan State.

Contrary to most previews of Wofford, which conclude that that the Terriers are a pretty poor offensive team that plays okay defense, Michigan coach John Beilein sees some similarities between his team and the team it will be lining up against in its opening NCAA tournament game.

Oddly enough, he sees similarities on the offensive side.

The jump shooter Beilein is referring to is junior guard Karl Cochran. Cochran is 77-of-194 (39.6%) on his threes. Stauskasi s 80-of-178 (44.9%) on his three-point attempts, so their quantity of long-range shots is comparable, but Stauskas is the more efficient shooter.

Wofford doesn’t like to shoot the three ball nearly as much as Michigan — its ratio of 3-pointers to field goal attempts is nearly 10 points lower than Michigan’s.

One thing is for sure: Beilein won’t be taking the Terriers lightly — even if they didn’t really have to get through Davidson in order to make the Big Dance.

“While they don’t have the seniors that you see a lot of times from the mid-majors, they have sophomores and juniors that are really playing well,” Beilein said. “So to win that conference, to get by Davidson and win that conference, you have to be a really good team. It’s been them or Davidson most years to get to the NCAA tournament. They’ve got another really good team.”

Wofford did ‘get by’ Davidson, but only because Davidson lost to Western Carolina in the conference tournament.

In the first half against Michigan State, Derrick Walton was a playmaker. Michigan’s freshman point guard was driving to the basket, knocking down threes and playing strong defense on Keith Appling, who had four points and an assist in the opening frame.

Walton hits three of four shots, scored nine points and while he didn’t have an assist he pulled down four rebounds.

The rest of the game didn’t go as well, but then it didn’t go well for any of the Wolverines. John Beilein was encouraged by his point guard’s play, and has been for the past month.

That being said, Beilein made it very clear that in crunch time, Walton would serve the same role as Glenn Robinson III, Nik Stauskas and Caris LeVert served last season with Tim Hardaway Jr. and Trey Burke on the team. That is, as a spectator.

“It’s no secret: when we get into crunch time, Glenn, Nik and Caris are going to be the guys who are going to be playmakers at that time as Derrick continues to learn his playmaking skills in the open court and things like that,” Beilein said. “Just like last year, where Nik and Caris and Glenn might be watching Tim and Trey do things, they just get better and get better.”