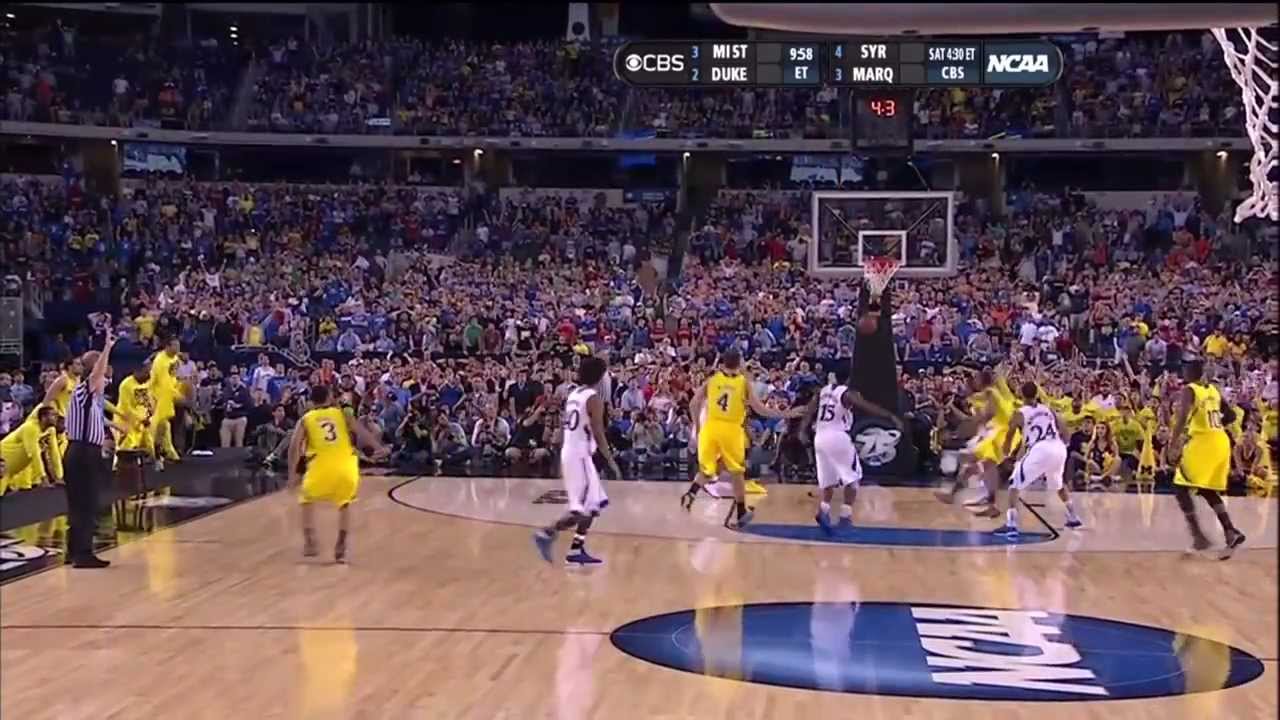 Michigan is two days away from starting another NCAA tournament journey, but here’s a look back at the top ten moments of Michigan’s 2013 NCAA tournament run. From Trey Burke’s three, to Spike Albrecht’s explosion against Louisville, here’s our top ten captured in video.

Is there anything else to say? This was the iconic shot from Michigan’s tournament run and Joe wrote a great story about the comeback in Dallas.

The ending was bittersweet, but Spike Albrecht’s first half was special to watch. To this day, Abrecht has only reached double figures one other time (10 points versus Arizona), but he had his moment against Louisville with 17 points.

Michigan limped into the tournament with a 6-6 record in its last 12 games, but everything changed at the Palace of Auburn Hills when Mitch McGary came alive. McGary dominated the weekend and accumulated 46 points 28 rebounds in two games.

4. Jordan Morgan takes a charge and caps Syracuse win with a dunk

Morgan had a rough tournament, battling through injury and the rise of Mitch McGary, but he was ready when Michigan needed him most.

Michigan escaped in the Sweet 16, but left no doubt in the Elite Eight. The Wolverines trounced Florida in a game that was essentially decided by halftime and Nik Stauskas had his only great game of the 2013 NCAA tournament.

This was a pass that only Spike Albrecht would make. A 35-foot, left-handed bounce pass through a crowd. But the pass reached its destination and Glenn Robinson III finished it off.

7. Albrecht’s steal and circus finish off of Florida’s inbound pass

It seemed that whenever Albrecht stepped on the floor he made some sort of highlight play during the 2013 NCAA tournament. This stretch helped ice away any chance of a Florida comeback.

8. Trey Burke’s block on Peyton Siva is whistled a foul

This was called a foul, but all 75,000 people in the Georgia Dome knew otherwise. Michigan’s Championship hopes would come up just short.

VCU’s ‘Havoc’ full-court press wasn’t just defeated, it was destroyed. This dunk extended Michigan’s lead to 26 points and turned the final 10 minutes into a celebration.

There were plenty of critical plays in Michigan’s comeback win over Kansas. Burke made contested jumper after contested jumper and Mitch McGary was rebounding and finishing everything, even with his off hand. But this basket by Glenn Robinson III late in the second half showed incredible hustle (by Jordan Morgan too), athletic ability and coordination, without it the shot might have never come to be.