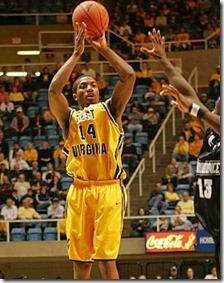 MILWAUKEE — Talking to Darris Nichols during Wofford’s open practice, it was obvious he was once coached by John Beilein.

Nichols is an assistant coach for Wofford, Michigan’s opponent in its first NCAA tournament game. But before that, Nichols was the point guard at West Virginia. And for three years, Beilein was his coach. Beilein’s influence on Nichols shows through in the way he talks about certain basketball coaching principles: building a culture, emphasizing unselfishness, blocking out everything during the buildup to a game other than the game itself.

Down to their mutual disdain for turnovers, Nichols and Beilein share the same philosophy on basketball.

“I think (not turning the ball over) is key especially towards the end of the year, when there aren’t as many possessions,” Nichols said on Wednesday evening. “Come tournament time, you can’t waste any possessions.”

Standing just off the court, watching his team prepare to take on Michigan on Thursday night, Nichols reflected on his history with Beilein, going all the way back to his freshman year of high school growing up in Radford, Virginia. Beilein originally recruited Nichols to play for him at Richmond. But when the coach moved on to West Virginia, Nichols followed.

“We had a good relationship obviously, before I even got on campus,” Nichols said. “I’ve known the guy for a long time. It got even better when I got to campus and played for him.”

Nichols played sparingly throughout his first two years in a Mountaineers uniform, but was one of the most efficient players in the country his junior year — and Beilein’s final year with West Virginia. Nichols was not the focal point of the offense, but he knew how to pick his spots with an effective field goal percentage of close to 60 percent. He also internalized Beilein’s no-turnovers philosophy on the court then as firmly as he preaches it on the sideline now.

After playing overseas for a year, Nichols returned to go into coaching. He found a job at Northern Kentucky, where he coached for two years before this season landing the job he has now at Wofford.

Player and coach have stayed in touch over the years, and Nichols said they usually catch up over dinner at the Final Four every year. Last year, Beilein had to skip out for obvious reasons. Nichols said he wasn’t surprised by his former coach’s success at his new destination.

“He has a vision of every program he’s taken over,” Nichols said. “And that vision is, he’s going to have culture guys. There’s going to be great culture around there. Guys are unselfish, they want to play hard for one another and for coach Beilein. I’m not surprised by the success he’s had at all.”

Nichols and the rest of the Wofford Terriers coaching staff will be trying for some success of their own tonight. Looking ahead to the matchup between his team and the Wolverines, the former point guard emphasized guarding against the long ball as a key to a defensive strategy against Michigan.

“I think what’s going to be key is guarding the 3-point line, obviously,” Nichols said. “They’re making around nine threes a game. We’ve played two teams in our conference that average nine threes per game. I think that’s a big deal tomorrow: guarding the 3-point line. I think both teams have great offenses. Neither team turns the ball over and [both teams] average a good amount of assists. It’s going to be a beautiful game of basketball in my opinion.”

In breaking down film of Michigan’s offense, Nichols sees the same thing Wolverine fans have noticed all season: Beilein’s offense this season is extremely effective but markedly different in terms of execution than it was one year ago.

In fact, the Michigan offense this season is much more similar to the offense Beilein ran at West Virginia.

“It’s a lot more similarities this year as opposed to last year,” Nichols said. “Last year, not taking anything away from Derrick Walton — who’s going to be great — you have a guy like Trey Burke last year who could run pretty much anything and he would make something happen. Now they’re more so back to the two-guard offense that we ran at West Virginia. A lot of similarities.

For his part, Beilein said when he learned of Michigan’s opening matchup that he wasn’t entirely comfortable knowing Nichols would be on the other sideline.

“Darris Nichols, one of the assistant coaches, is one of the smartest, brightest point guards I have ever had,” Beilein said on Sunday immediately following the selection show. “Now I wish he really didn’t understand our offense at all, but he knows everything about us, so we have a challenge with a guy on the other bench who knows a lot of what we do.”

Nichols is a first-year assistant at Wofford, so it isn’t reasonable to assert that his Beilein-esque style has permeated the program to any appreciable extent at this point. But it probably isn’t purely a coincidence that Nichols is working for a team that the Michigan coaching staff has compared favorably to its own on numerous occasions. Michigan coaches and players alike have referred to the Terriers as cerebral, smart and deliberate, all attributes Michigan shares.

They also have the 55th-lowest turnover percentage in the country. While they still have a ways to go to approach Michigan’s range of protecting the ball, it is clearly a value.

There is one other core value that Nichols has carried over from his days playing Beilein, and it’s the piece of Beilein’s coaching philosophy that he is perhaps most famous for.

“You’ve got to spend a lot of time shooting the ball. Guys who can make shots are really hard to guard. Obviously. You just got to spend time at it. You gotta work on it every day and break it down. He does a great job of that.”