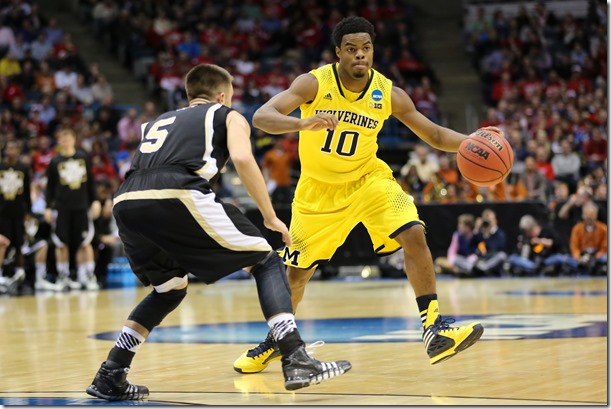 It took 30 minutes for Wofford to make a three-pointer.

Wofford star Karl Cochran hit the shot with 9:35 to play in the second half and cut Michigan’s lead to seven points. A sloppy, but otherwise uneventful game between Michigan and Wofford suddenly showed signs of March. The shot sparked life into a pro-Wisconsin crowd that had been mostly content to watch in silence.

The Wolverines had controlled the game from the opening tip, but were never dominant. In the first half, foolish turnovers kept the Terriers close. In the second half, Michigan went cold from the field. Wofford didn’t play close to its best game, but it was right there with under ten minutes to play.

Michigan responded to Cochran’s shot, outscoring the Terriers 17-7 over the final 9:25. Jordan Morgan finished an and one layup before Caris LeVert and Derrick Walton hit back-to-back threes to ice the game away. The Wolverines would go on to win comfortably by 17 points in a 56 possession game.

But Cochran’s three, the only one that Wofford made in 19 attempts, showed what could have been. The Terriers were disciplined, slowed down the game and defended Michigan better than most have managed this season. But the perimeter shots never fell and Michigan is moving on to face Texas on Saturday.

Michigan’s offense only managed 1.03 points per possession, its worst offensive output in a winning effort this season. In the first half, the Wolverines couldn’t hold onto the ball, coughing it up on 26% of their possessions. The Wolverines fixed the turnover issues, but lost their jump shot at halftime. Michigan shot just 31% on twos and 36% on threes in the second half after shooting 69% on twos and 50% on threes in the opening 20 minutes. The Wolverines gave the ball away on 20% of their possessions and six different players had at least one turnover.

This was Michigan’s second best defensive performance of the season (only topped by holding UMass-Lowell to .69 PPP) and it was Wofford’s worst offensive performance of the season. Michigan looked well-prepared for Wofford’s offensive sets and stifled Terrier star Karl Cochran. The Wolverines switched the right screens, banking on the fact that Wofford’s supporting stars couldn’t pick up the slack, and the gamble paid off. Wofford’s starting guards were just 10-of-31 from the floor (1-13 from 3) and their teammates weren’t much better at 8-of-23. Michigan rebounded 76% of Wofford’s misses, kept the Terriers off the line, but could couldn’t force many turnovers.

Michigan’s defense showed improvement, but the Terriers just couldn’t make a shot. Wofford shot a respectable 50% on two-point attempts and if it managed its season average of 35% from three-point range this would have been a different game.

Survive and advance is the mantra in March and Michigan managed to do just that. The Wolverines didn’t near their top-gear against Wofford, but they’ll need it on Saturday if they want to play in Indianapolis next weekend.