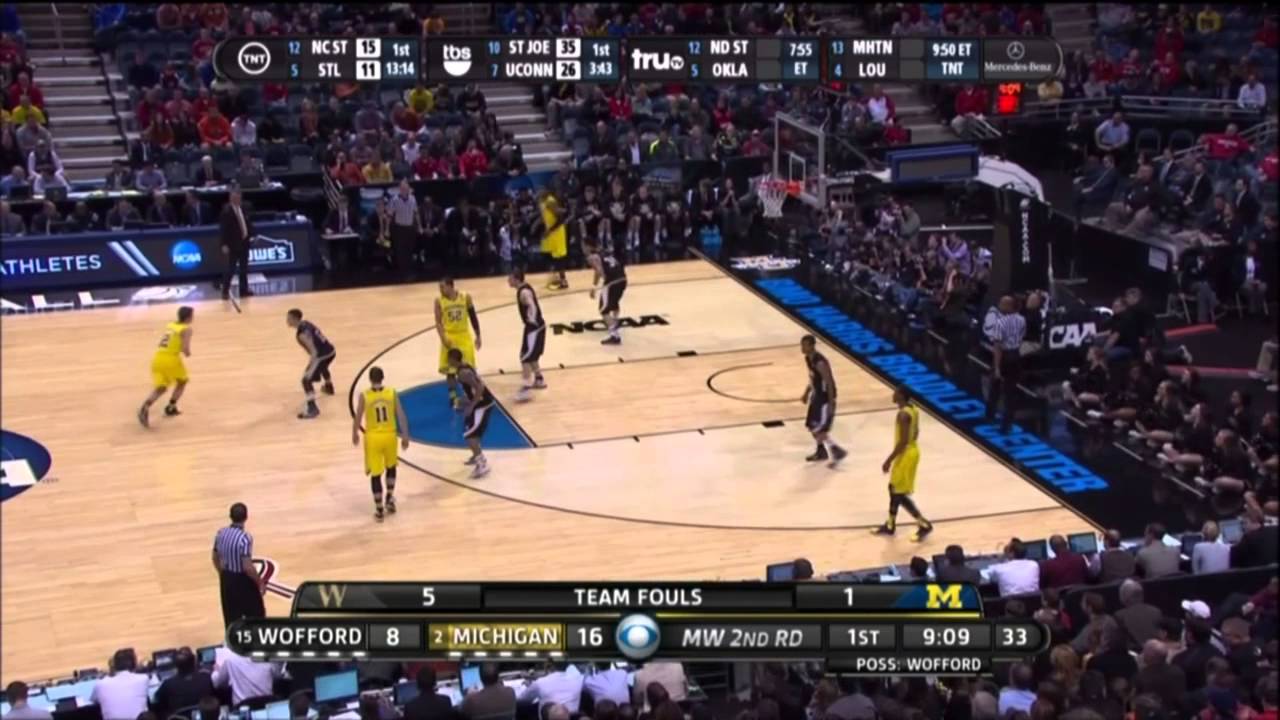 Michigan’s 57-40 round of 64 victory over Wofford on Thursday didn’t feature many highlights. About midway through the first half, both teams were scoring at a snail’s pace — the Wolverines scored only nine points on 12 possessions but still held a three-point lead. But after an official timeout, Michigan started to pick things up. It started, as offensive surges normally do, with Nik Stauskas. Caris LeVert handed the ball off to Stauskas cutting up on the perimeter and screened Stauskas’ defender. Then Jon Horford screened LeVert’s defender who had switched onto Stauskas, leaving the sophomore open for the shot. This is a common set run specifically for Stauskas, but it worked to perfection on this play. On the next play, Jon Horford hands the ball off to LeVert on the pick-and-roll. Horford’s defender, C.J. Neumann, elects to double LeVert, leaving Horford open on the roll. LeVert’s defender, Spencer Collins, is late on the rotation over to Horford and LeVert hits the redshirt junior under the basket. Later, LeVert makes a strong play on the defensive end, chasing down a rebound off a Wofford miss and tapping the ball to Horford who gets it to Spike Albrecht who initiates the fast break. Zak Irvin receives the ball before Wofford’s defense was set, makes a strong dribble and pulls up for the long two. Jordan Morgan gets in on the action, executing a free-throw line jumpshot after the lane was closed off to him on the roll. Finally, Morgan hits Stauskas with a tough pass when the sophomore cuts back door, but Stauskas hits the difficult baseline jumper. This run gave Michigan a 12-point lead, which they never really surrendered until late in the second half.

In Milwaukee, a city that his father used to own in the NBA, Glenn Robinson III had a solid game. The sophomore was consistently aggressive, scoring 15 points on 5-of-10 shooting from two though only going 1-of-4 from beyond the arc. While Robinson continues to struggle a bit with his long range shot, he did other things well on Thursday, including rebound — Robinson pulled down seven boards, three offensive. He also forced some turnovers in the post and had active hands all night guarding Wofford’s bigs. But on three consecutive possessions near the end of the first half, Robinson turned on the scoring. In the first play, Derrick Walton does an excellent job of moving the defense over to one side by making a move toward Nik Stauskas on the perimeter. Wofford loses track of Robinson cutting baseline the opposite way and Walton hits him under the basket. Later, Robinson takes advantage of the lack of respect Wofford has for him on the perimeter. Lee Skinner refused to guard Robinson tight at the 3-point line, which was probably a smart play. But this time, Robinson hits a three right over him. Finally, Robinson sizes up C.J. Neumann and simply shoots over the top once again

Opposing defenses are going to consider playing off Robinson as Michigan’s weakest shooter, but he made Wofford pay.

“With all the ball screen hand-off actions with Morgan, we were going to come off of Robinson and try to absorb some of that,” Wofford head coach Mike Young said after the game. “22 percent from three — correct me if I’m wrong — pick your poison.  You’re certainly not going to blink off of Stauskas.  LeVert had a great year for them.  Walton is 39 percent from three, and there’s got to be something in the middle lane to take care of some things.  I told a couple of friends earlier today in our staff meetings that that was a big matchup.  If he shot it, he scored, you know, 14, 18, 20, we had some problems.  And he’s a very talented player.  But we felt like it was our best opportunity to guard them, and that’s how we went.”

Karl Cochran finally hit a three midway through the second half and suddenly the Wofford threat felt real. The Bradley Center came to life as the Wisconsin fans in the stands began to vocalize their support for the underdogs. Michigan fell asleep defensively on this possession — one of the few instances of less-than-vigilant defense for the Wolverines — as Cochran probes the defense in the secondary break and finds a drag screen. LeVert and Albrecht have a miscommunication and both players leave Cochran wide open. Cochran buries the jumper, his first and only three of the game, as Albrecht tries to fly in late. This sort of opening for Cochran was especially rare on Thursday night — on most possessions, the sharpshooter was the focal point of Michigan’s defense. Spike Albrecht, the defender who got beat on this particular play, spoke on the difficulty of containing Cochran — and the job Derrick Walton did on him all night.

“Coach B talked about how, especially number two, Cochran, is such a good shooter and he can get his shot off any time, as you could see out there,” Albrecht said. “But D-Walt did a great job chasing him around and making him shoot tough shots.

“It’s tough. Because first of all, he’s fast as heck, and you’re getting blown up by screens left and right. Derrick did a fabulous job of getting through those. I was out there for a little bit, and it’s not easy. So Derrick did a really good job.”

Wofford was suddenly in the game and Michigan needed an answer. The Terriers missed a shot that could have cut into the lead even further and then Jordan Morgan came through with the play of the game for the Wolverines. Morgan slips the screen and Albrecht finds him with the smooth bounce pass. Morgan manages to finish and the 50-50 block-charge call goes his way at the rim.

Wofford head coach Mike Young admitted after the game that this sequence was what did the Terriers in.

“[We] cut it to seven and Cochran got a stop. He had a shot that Cochran makes with regularity and didn’t get it down,” Young said. ” And then Morgan on a slip down the middle of the lane and it was a block, exceptionally well-officiated game.  It was a block.  Morgan got it down.  So, there’s a swing.  Instead of five, it’s back to ten and you got different dynamics.”

Morgan had himself a strong all-around game on Thursday, with this basket being only one good moment in a game full of them for the redshirt senior. Morgan played the lion’s share of minutes, logging almost 30 to jon Horford’s 11, and came away with the double-double: 10 points and 10 rebounds (two offensive).

Caris LeVert didn’t play his best game, but this late three pushed Michigan’s lead to 15 points with 4:21 to play and ended all doubt. Walton would add another three on the next possession and the Wolverines were off to the second round. The Wolverines were a bit too jumper happy in the second half, finishing just 4-of-11 from three-point range with three of the four makes in the final 4 minutes and 30 seconds, but when the threes are falling they can change the game in a hurry. It was Michigan’s defense that kept it in control of this game, allowing it to pull away with just a few big shots.

“I think we just kept sticking to go our principles, and the same shots that we had early in the second half didn’t necessarily fall, they fell for us,” Jordan Morgan said after the game. “Caris had hit a three.  Nik hit one. We just kept playing good defense. I think we played good defense all game long, made them make tough shots and sticking with that, eventually went in our favor.”