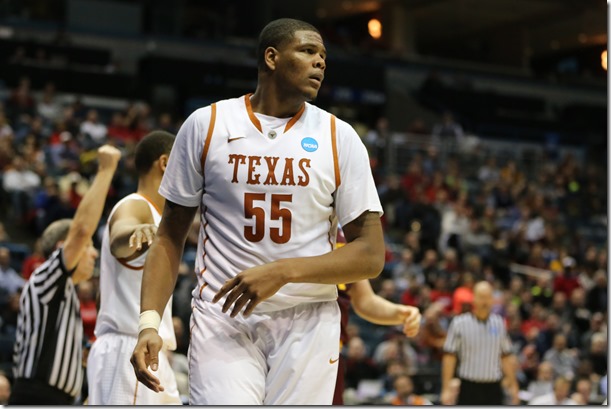 MILWAUKEE — Cameron Ridley is a giant. This is true in a very literal sense. Ridley, merely a sophomore, is the 6-foot-9, 285-pound center for Texas. His massive frame is no less daunting because of his soft touch around the rim.

Michigan takes on Texas as its round of 32 matchup in the NCAA tournament on Friday. The Wolverines have gone up against big players before — Florida State’s Michael Ojo was a chiseled-from-granite 7-foot-1, and many Wolverines said he was the biggest player they’d ever faced. But Ojo was a substitute, Ridley is much more skilled and is a focal point of the Texas offense.

Ridley’s gargantuan features belie an extraordinarily soft-spoken nature. Straining to hear him seated in front of his locker in the Texas locker room, the sophomore from Houston expressed confidence in his ability to rebound against the Wolverines. At the same time, he doesn’t want to be over-eager to attack Michigan’s smaller frontcourt.

“Yes, it excites me in a way, because I’m sure I can out-rebound them,” Ridley said on Friday regarding the matchup with Michigan. “At the same time, I don’t want to try to force anything. I want the game to come to me. Because if I try to do things that I can’t, it might get me in foul trouble or make me play better. Just go into the game like every other game.”

Unfortunately for Michigan, Ridley isn’t the only big man they have to deal with against the Longhorns. They also boast a 6-foot-8, 240-pound forward named Jonathan Holmes. Holmes is also a dominant offensive rebounder and he’s efficient than Ridley offensively.

Holmes said Texas will be following the blueprint that has served the Longhorns all season — attack the glass, force the issue inside.

“Definitely (rebounding is) a point of emphasis going into the game,” Holmes said at the podium on Friday. “Just getting the ball inside and attacking off the glass, trying to take advantage of that.”

Looking on the bright side of the matchup for Michigan, Wolverine center Jordan Morgan has plenty of experience going up against players who have him beat in the bulk department. It’s easy to recall his battle against Ohio State’s Jared Sullinger from a few years ago, in which he acquitted himself well, and his numerous matchups against former Michigan State center Derrick Nix.

The key for Morgan will be avoiding fouls. If the big man gets in foul trouble early, it could spell doom for the Wolverines’ inside presence. Michigan assistant coach Bacari Alexander spoke on his emphasis to Morgan leading up to the game.

“We talked earlier today with our bigs, live to fight another battle,” Alexander said. “There will be times when you may be beat to defensive position. Okay, not you have to keep your body between your man and the basket, and live to fight another possession. If it’s 6-4 early in the game, we don’t need to get those early fouls — especially if it’s someone as important as Jordan Morgan, who traffic cops for us on the defensive end.”

If size is Michigan’s main worry, for Texas it is keeping Michigan’s transition game at bay. Going into these matchups, with a quick turnaround, storylines develop quickly. These two topics dominated the narrative for each team on Friday.

When Texas coach Rick Barnes was asked about what concerns him most about Michigan, his response was immediate.

“Transition,” the coach said, sitting at the podium on Friday. “They’re not a traditional-type transition team where they will, say, run the same guy to the rim all the time. They run to different spots. Different guys can bring the ball down the floor. So we have to really work hard in transition to get back and get our defense set.”

Barnes has good reason to fear Michigan’s fast-break offense. Similar to last season, the Wolverines don’t run much — only on 16 percent of their possessions — but when they do, they almost always score. Michigan is scoring 1.27 points per possession in transition offense this year – 96th percentile nationally.

One player Texas may want to keep an eye on is Derrick Walton. While it’s true that any player from one through four can start the break for Michigan, with his speed and rebounding ability, Walton may be one of the most dangerous initiating run-outs. The way Michigan will likely handle defensive rebounding will call for Morgan and Jon Horford to box out Texas’ bigs while guards like Walton swoop in and clean up. It’s a strategy that could pay dividends for the Wolverines — if, of course, they are able to box out those Longhorn bigs.

“They’re great around the rim, great offensive rebounders,” Horford said in the locker room on Friday. “We have to prioritize boxing them out and not letting them get good position, and let our guards clean up rebounds.”

Obviously, a matchup between these two teams doesn’t break down evenly along just these lines. It’s not as simple as Michigan’s speed vs. Texas’ size; in fact, Texas plays at a faster pace than Michigan on average.

As John Beilein said at the podium on Friday, sometimes it comes down to how the ball bounces off the rim.

“So, concerned about (Texas’ size) because the ball needs to bounce our way,” the coach said. “We got to box out and really do a good job, but I mean it. Sometimes you win games, that ball goes off the rim and you are boxing out hard. With the ball straight up over the rim, they’ll be getting a lot of those no matter what we do. So you got to be in position to be in position, but offensive put-backs are a concern.”