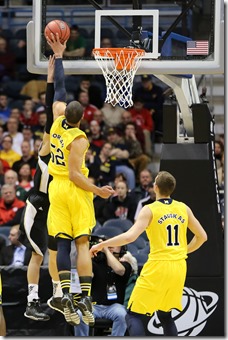 MILWAUKEE — Gritty not pretty. That’s what Michigan assistant coach LaVall Jordan said the Wolverines had to be in their 57-40 round of 64 victory over Wofford in the NCAA tournament on Thursday night.

Michigan must have been gritty. Because that game was anything but pretty.

The Wolverines were strangely dominant, with the outcome of the game never truly in doubt. Wofford was known to be an offensively inept team coming into the matchup, but the Terriers outdid themselves in Milwaukee on Thursday. The only time Wofford challenged Michigan was when supposed sharpshooter Karl Cochran hit a 3-pointer midway through the second half to cut Michigan’s lead to seven. The only problem for the Terriers? That was their only made 3-pointer on the night.

If Wofford made a few more of those deep balls, it could have been a different game. As it turned out, it was an easy — if ugly — win for Michigan in its first game of this year’s NCAA tournament.

It was also a strange win for this Michigan team. The Wolverines typically excel in games that are fluid, when offense rules the day and Michigan can out-shoot its opponent. In fact, Darris Nichols, a Wofford assistant coach and a former player under John Beilein, predicted that the crowd at the BMO Harris Bradley Center in Milwaukee would be treated to “a beautiful game of basketball.” In actuality, this game — offensively, at least — was anything but that. (Photo: Dustin Johnston)

Typically, when games get ugly, it’s bad news for Michigan. But on Thursday, the Wolverines got down and dirty and won the game with — believe it or not — defense.

Yeah, that’s not a typo.

“We’re not known for our defense,” Spike Albrecht said with a knowing chuckle in the locker room after the game. “So doing a good job defensively means a lot.”

Given that whether or not Michigan could improve its defense was one of the main questions regarding this team heading into the NCAA tournament, it’s safe to say that the Wolverines showed something on Thursday.

So yes, Wofford is a generally putrid offensive team. The Terriers were coming into this game with the 256th-ranked offense in the country. Pretty much the only thing they do well is hold onto the ball — but that doesn’t do a whole lot of good when you can’t put the ball in the basket. Like Albrecht said, to an outside observer this game may look like a very bad offensive team doing exactly what it’s done all year. But to Michigan, it was a step forward in an area they needed to make progress in.

Michigan assistant coach Bacari Alexander said that calling this defensive performance a “statement” would be an exaggeration, but he acknowledged that it was a positive development in “establishing a defensive identity.” Alexander articulated two defensive focuses heading into the matchup with Wofford: harass the Terriers’ best shooter, Karl Cochran, and make life difficult for their big man, Lee Skinner. The Wolverines accomplished both of those objectives.

“Cochran is a phenomenal scorer,” Alexander said after the game. “At a little over 18 (points) a game, we wanted to make sure we gave him no separation. I thought Derrick Walton Jr. and Spike Albrecht did a phenomenal job, Caris LeVert got switched onto him a few times.

“Another thing we wanted to do was make the post touches real tough for Skinner inside. I thought Jordan did a great job of that, Jon Horford came in and used his length.”

The numbers agree with Alexander’s assessment. Derrick Walton finished with two steals, but more importantly he was in Cochran’s grill all night — the freshman didn’t give up many open looks, and while Cochran hit on seven of his 11 two-point attempts, Walton hounded him on the perimeter and held him to one out of 10 3-point shooting.

Inside, Jordan Morgan had a tremendous game overall — 10 points and 10 rebounds (two offensive) — but especially relevant was his block in the first half, a pin against the backboard of a shot from Skinner. Morgan also racked up two steals, which contributed to Skinner’s three turnovers on the night.

All of this added up to one of Michigan’s strongest defensive performances of the season. The Wolverines only allowed Wofford to score 0.71 points per possession, which is the second-best defensive effort this year. Morgan said the inspired defense was due to the realization that on most nights, the offense will be there. Therefore, defense will likely be what decides games for Michigan.

“We know we’re pretty efficient offensively and most times we don’t have very much trouble scoring the basketball from different people and different games,” Morgan said. “So, we know we’re only going to go as far as our defense carries us, and we never know which game is really going to be our last.  So we just want to play every game defensively as best we can.”

In a game when the offense was conspicuously absent, defense carried the day. In the first half, Michigan was fine offensively outside of its eight turnovers — 3-of-6 from three, over 60 percent from the field. But in the second half, when Wofford made a run, the Wolverines struggled mightily on the offensive end, shooting 33 percent.

If the Terriers could have hit a few more shots in the latter frame, they could have made a game of it. But they couldn’t. While that wasn’t purely because of Michigan’s defense, it wasn’t as though they were missing wide open jumpers, either.

Michigan’s defense was as meaningful a contributor to this victory as any other factor in the game. And that is a positive, regardless of Wofford’s inability to hit the broad side of a barn. John Beilein, at least, was pleased with his team’s defensive effort.

“We really told them that, we emphasized this week, we can’t talk about defense after a loss anymore. It’s going to be your last game,” Beilein said during his post-game press conference. “So, we got to make another commitment to make sure that you understand we’re going to have to do that, and that probably was our best defensive performance overall by everybody.”