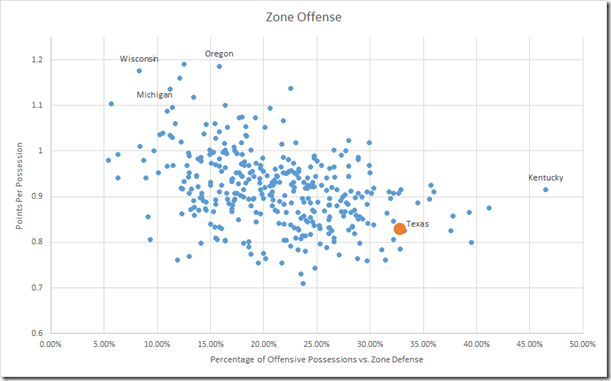 The Wolverines are an embodiment of offensive efficiency. Michigan rarely turns the ball over, shoots it well from every spot on the floor, avoids fouling and often concedes offensive rebounds to get back on defense.

The Longhorns rely on size, strength and brute force. Texas is one of the worst shooting teams in the country and its offense amounts to little more than throwing the ball up toward the rim and going to get it.

Michigan is the third-best shooting team in the NCAA tournament, Texas is the third-worst. The Longhorns are one of the best offensive rebounding teams, Michigan is one of the worst. Texas didn’t have a great season, finishing 11-7 in the Big 12 and only outscoring its conference opponents by .01 points per trip, but this will be a difficult prep on short rest for a Michigan team that starts a 6-foot-8, 250 pound big man and a 6-foot-6, 240 pound power forward.

Texas ranks 240th or worse in every shooting stat there is: two-point shooting, three-point shooting, free throw shooting and effective field goal percentage. Putting the ball in the basket is a chore for the Longhorns, but there aren’t many teams that are better at cleaning up the mess. Texas rebounds 39.4% of its missed shots, sixth best in the country.

The Longhorns are ranked 47th in effective height and do a great job of protecting the rim. Texas is ranked 7th in block percentage and 15th in two-point defense. Given their interior defensive prowess, it’s not surprising that opponents attempt a lot of threes against the Longhorns. 35.6% of opponents’ field goal attempts are threes (239th) and they connect at a 34.7% (196th) rate. Texas only forces turnovers on 16.5% of its opponents’ possessions (285th) and has been foul prone at times, allowing a free throw rate of 41%. Texas is undefeated when it holds opponents below 1 point per possession, but is just 6-10 when allowing 1.01 points per trip or more.

Texas grades out as a very good ball screen defense, but its transition defense is questionable. The Longhorns surrender 1.14 points per transition possession, 27th percentile per Synergy. Given Texas’ youth and offensive rebounding aggression, transition opportunities should be available for Michigan if it can hold its own on the defensive glass.

Freshman guard Isaiah Taylor averages 12.5 points and 3.9 assists per game for the Longhorns. He’s a jet-quick guard that does almost all of his work in the paint. 72% of his field goal attempts are in the paint this season and he’s only made five threes in over 1000 minutes this season.

Taylor loves to shoot the floater in the middle of the paint, a third of his field goal attempts are in that area of the court, but he shoots just 28% from there. The floater is a difficult shot, but perhaps Taylor needs to diversify his game.

Texas’ arsenal of post players is what will cause concern in Michigan’s locker room leading up to tip-off. Cameron Ridley stands 6-foot-9, 285 pounds and Jonathan Holmes stands 6-foot-8, 240 pounds. Physically they are the most imposing big men that Michigan has dealt with since facing Florida State in Puerto Rico.

Ridley is a foul magnet. He attempts 83 free throws per 100 field goal attempts, the 22nd best free throw rate in the country, but he only shoots 62% at the stripe. He’s a legitimate post-up scorer, averaging 0.851 points per post-up possession (55th percentile nationally, per Synergy) and he shoots 55% on twos. He has the strength to move opposing post defenders and if he gets near the basket he has no problem finishing.

Holmes is a stretch-four man that can stick threes (35% on 79 attempts), block shots and rebound on both ends of the floor. Holmes leads Texas in scoring at 12.9 points and 7.1 rebounds per game and he’s a versatile scorer.

He only has about a third of the post-up possessions as Ridley, but he’s ranked in the 86th percentile nationally in post-up efficiency. He should get plenty of opportunities to exploit his size advantage over Glenn Robinson III.

Javan Felix developed a three-point shot over the off-season (34% on 175 attempts, up from 26% on 47 attempts), but he’s still a dreadful scorer inside the arc. Felix shoots just 38% on two point attempts and attempts a lot of shots in the mid-range. He appears to be the primary threat to knock down corner threes if Michigan goes with its 1-3-1 zone.

Demarcus Holland plays the third guard spot for Texas. He’s the lowest usage starter and least efficient player in the Longhorn rotation. He shoots just 45% on twos and 29% on threes and has struggled with turnovers. Connor Lammert, Martez Walker and Prince Ibeh are the top three options off the bench. Lammert is a 6-foot-9, 235 pound stretch four that can hit the three (35%) and crash the glass. Ibeh is backup center that does the majority of his work on the glass and finishing at the rim while Walker is a Detroit native and shooter.

Texas scores .819 points per possession against zone defenses, per Synergy. That ranks in just the 28th percentile nationally and the Longhorns have seen zone defenses on nearly a third of their offensive possessions. The following scatterplot shows how much zone defense Division I teams have faced and how effective they’ve been scoring against the zone.

Teams like Michigan, Wisconsin and Oregon, who are coincidentally all playing in Milwaukee this weekend, are zone-busters but opponents have realized that. Texas is in the bottom right quadrant of the chart where teams get zoned often, but can’t score. Michigan has two options with the 1-3-1 and the 2-3 and I suspect they’ll both be used a fair amount.

Keep Morgan out of foul trouble

Jordan Morgan has played against Derrick Nix, so he’s at least familiar with the type of challenge that Ridley presents. The biggest key for Morgan will be to avoid picking up cheap fouls so that he can stay on the court and make Ridley work for his offense.

Staying out of foul trouble and keeping Texas off the line is an important goal on the team-level as well. The Longhorns are just 4-8 when they manage a free throw rate under 40% and are 20-2 when they top that number.

Basketball revolves around putting the ball in the basket and shooting is perhaps the top barometer of the Longhorns’ success.  Texas is 3-8 when it has an effective field goal percentage under 45%, but it is 21-2 when it tops that mark (with both losses coming to Oklahoma).

Texas has a lot of talent, but hasn’t been able to put everything together consistently this season. The Longhorns lost six of their last 11 games entering the NCAA tournament and KenPom likes Michigan by a score of 73-69.