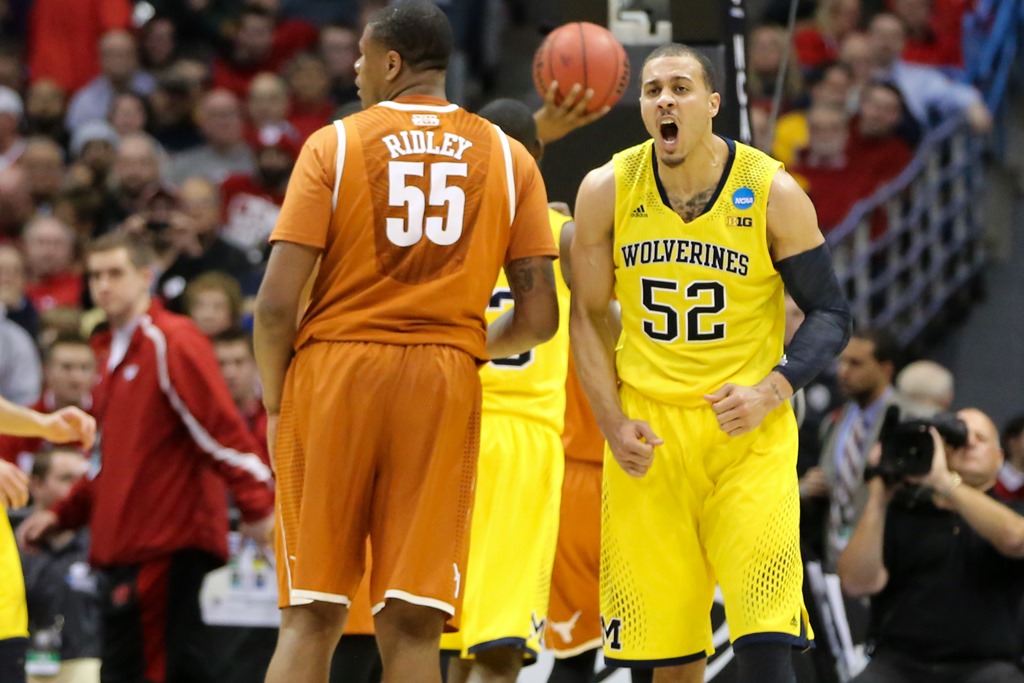 Michigan and Texas both were able to do what they do best in their round of 32 clash on Saturday night in Milwaukee, but Michigan controlled the game with a 27-6 run midway through the first half and never looked back.

The Longhorns imposed their will in the paint, rebounding over half of their misses, and defended the rim, but they shot like they’ve shot all season and couldn’t defend the Wolverines on the perimeter.

“We knew that number, that rebounding number, we probably weren’t going to win that today,” John Beilein said in his postgame press conference. “We had to win the other numbers to win the possession number.”

Michigan won all of the other numbers.

The Wolverines racked up 16 assists and only turned the ball over four times. They outscored the Longhorns 15-2 in points off of turnovers, 10-5 on the fast break and got to the free throw line more often. Most importantly, they made 14-of-28 threes, a program record in the NCAA tournament, while Texas attempted just 11.

There’s more than one way to win a basketball game, but right now it’s tough to argue with Michigan’s formula for success.

Michigan shot just 38.5% on two-point field goals, but still managed to score 1.38 points per possession – the most Michigan scored against a major-conference foe this season and the most that Texas allowed this season. How did the Wolverines manage it? They turned the ball over just 4 times in 57 possessions and shot 14-of-28 from three-point range. Six different Michigan players made at least one three and they all shot 50% or better from long range.

Texas has done a great job of defending the interior, but Michigan’s perimeter talent was just too much. Texas couldn’t come up with a working solution to defend Michigan’s ball screens. Wolverine guards drove off the switch, shot over the soft-hedge or found the roll man on the trap. Texas’ bulk is great around the rim, but stretched out onto the perimeter the Longhorn man-to-man defense had no hope of containing Michigan’s wealth of attacking talents.

The story of the game was tempo. In the first half, both teams went up and down for eight and a half minutes without a break. There were no fouls or timeouts until the 11:25 mark in a stretch of basketball that went back and forth more like soccer.

The Wolverines did a very good job on the defensive glass in the first half, grabbing two-thirds of Texas’ misses, as the up-and-down action clearly tired Texas’s big men. Clean defensive rebounds allowed Michigan the opportunity to push the ball off and it racked up 10 fast break points and scored 1.45 points per trip in the first half.

Texas managed to change the complexion of the game in the second half by unleashing a zone defense. The zone slowed down Michigan’s offense a little bit — it still managed 1.30 points per trip in the second half – but it kept the Texas big men near the rim and saved their energy to crash the offensive glass. Texas rebounded 68% of its misses in the second half and Michigan snagged just five live ball rebounds – eliminating almost all transition offense. Texas’ offense was able to keep pace in the deliberate second half game as they scored 1.27 points per trip.

That was enough to keep Texas in the game – the Longhorns eventually cut the deficit to six points – but Michigan had too much clutch production from Glenn Robinson III, Caris LeVert and Jordan Morgan down the stretch.

Michigan is headed back to the Sweet 16 and maneuvered its way through the opening rounds without breaking much of a sweat. Sterner challenges do lie ahead, but the Wolverines are guaranteed to face a double-digit seed in the Sweet 16 against either No. 11 Tennessee or No. 14 Mercer.