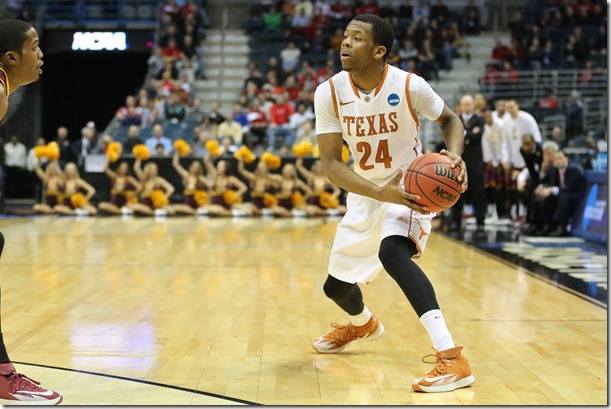 Sure, the Texas freshman will wear socks under his basketball shoes during the Longhorns’ practices and games, but that’s about it. It’s a confusing quirk to Walker’s teammate, Texas sophomore Demarcus Holland.

“Just walking around campus – we might go to Wal-Mart and he doesn’t wear socks,” Holland said in Texas’ locker room on Friday prior to the Longhorns’ matchup against Michigan. “I don’t know. It’s just weird to me. But that’s just him. That’s Martez for you.

It just goes to show — you can take a kid out of Detroit, but you can never convince him it’s cold in Austin, Texas. And being a Detroit import — Walker played for Pershing High School for four years before committing to Texas — Walker lives with that tension many Detroit lifers feel when they “make it out,” so to speak.

Escaping the city that eats so many of its young is an accomplishment in and of itself, yet Walker still harbors that unique love any person feels for home.

“I just wanted to get away. Detroit is hard. It’s hard to get out of there,” Walker said on Friday, sitting in front of his locker at the BMO Harris Bradley Center in Milwaukee. “It’s like the gutter. If you make it out, you should want to stay out.”

Walker has made it out, all the way to the Texas basketball team. The freshman will be taking on Michigan on Saturday in the Longhorns’ round of 32 matchup with the Wolverines. Michigan didn’t recruit Walker for a variety of reasons — John Beilein already held commitments from Zak Irvin and Derrick Walton in Walker’s senior year at Pershing, which was when his recruitment took off.

Walton and Walker, both being Detroit natives, have known each other since their AAU days. Walker said he and Walton have a good relationship and said he’s “a competitive player.” Walker also added that he doesn’t hold any ill will toward Michigan, but did admit that he wants to show Beilein “he should have recruited” him.

If Walker plays the way he played in Texas’ round of 64 game versus Arizona State on Thursday, it will go a long way toward proving he belongs at any program — the freshman scored 16 points on four field goal attempts, hitting nine of 10 free throws down the stretch in the Longhorns’ last-second victory.

Holland said he was one of the players who helped Walker make the transition to the college game, and it appears Walker is internalizing some of the lessons at just the right time.

“There are pieces I feel I can add to my game. I know that I need to get my listening skills a little better,” Walker said. “That was the reason I wasn’t playing the first part of the season, because I wasn’t listening. He was explaining to me, I need to do this, I need to do that. That’s all I’m trying to do – do that and get better.”

He has gotten better this season — after scoring over 10 points in a game only three times the whole season, he has hit double figures in three of Texas’ past four games. In only his first year, Walker is becoming the player Texas coach Rick Barnes needs him to be.

“He’s grown so much and he’s really grown in the last month a lot,” Barnes said during a press conference on Friday. “I think our players and his teammates have a lot of confidence in him. Because the one thing they know is that he’s fearless and he’ll play, he’ll go play and it doesn’t matter where. He just wants to be out there playing.”

It was Oakland University head coach Greg Kampe who first turned Barnes on to Walker. Kampe called Barnes and asked the coach if he was going to offer Walker a scholarship late in Walker’s senior season. After Walker took his visit to the Texas campus and met the team, it wasn’t only Barnes who was convinced — it was Walker’s future teammates.

“Immediately the players would tell you that, just from their time with him, ‘Coach, we don’t have anybody like this, and we need somebody that’s got his swagger and his attitude,'” Barnes said. “And like all freshmen coming in, you know, they’re going to have to work at certain things. He’s changed his body a lot, and he’s just getting started in terms of how good a basketball player that we think he can be.”

Putting in the work to get better is nothing new to Walker. The freshman was lightly recruited his entire high school career until his senior season, when he finally got a number of high-major offers. But even in the midst of his recruitment, when most players are hearing about how they’re God’s gift to the basketball world, Walker was listening for one thing from all the coaches recruiting him.

“I was going to the coach telling me that I needed to work,” he said.

“I was never given anything. I worked for whatever I got. For me to understand that, and a coach who understands that … that’s all I was looking for.”

And so, in the Austin heat and under the bright lights of the Texas basketball program, Walker works. He is far from his family, in a self-enforced exile many from Detroit feel is necessary. Walker said that he gets plenty of phone calls from his grandmother and his brothers, but that they know “it’s better for me here.”

Especially being only one year removed from his Detroit roots, he feels that unique tension acutely, inhabiting a space between love for his city and the reality of its shortcomings.

“I just miss Detroit. That’s what it is,” Walker said. “That’s where I’m from, and I can never forget about it.”