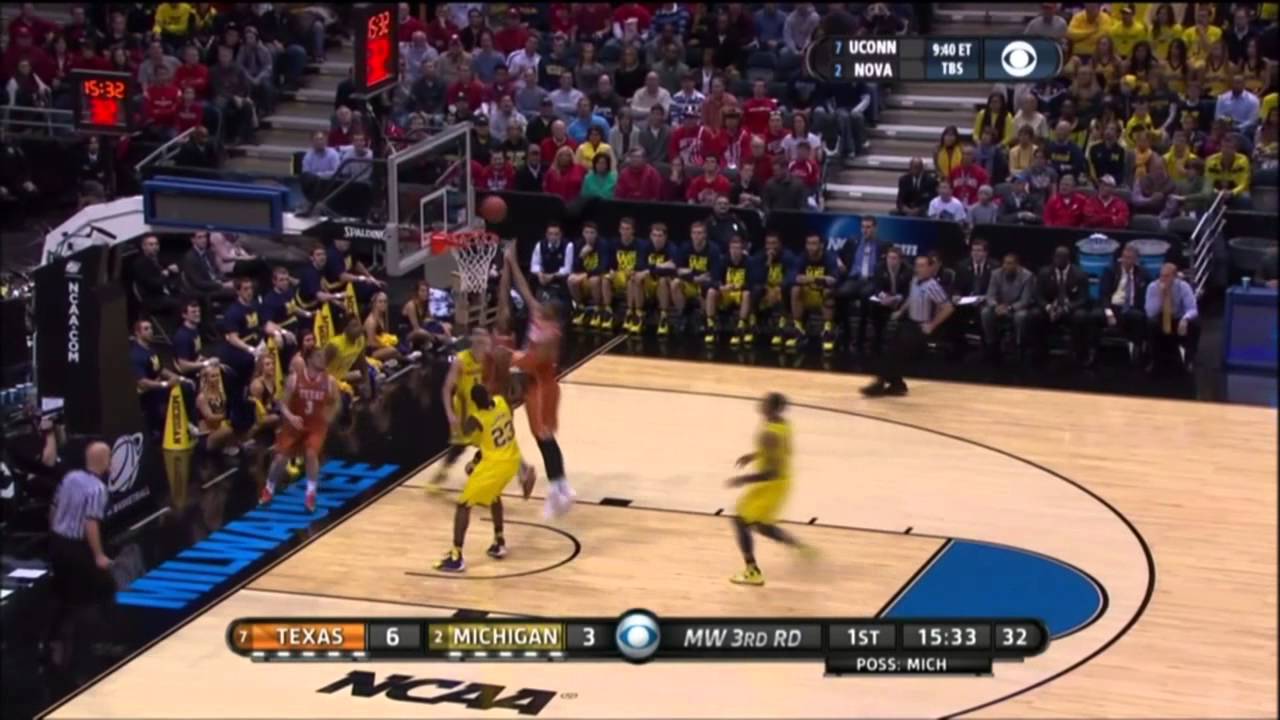 For the first eight and a half minutes of Michigan’s 79-65 victory over Texas on Saturday, there was no whistle. The Wolverines and Longhorns went back and forth and this sequence was a perfect illustration of what usually resulted from each team’s respective trips down the court. Glenn Robinson III throws the ball away — this was an extreme rarity in this game, as Michigan registered only four turnovers — and Texas races downcourt only to miss a layup that may have been partially blocked by Nik Stauskas. Caris LeVert gathers the defensive rebound and runs the other way, finding Stauskas wide open for his favorite shot, the transition three. Michigan stressed that this opening stretch exhausted both teams, but the Wolverines seemed better equipped to handle the pace.

“I don’t even know if that was an advantage for us because we were all pretty tired by that time,” Stauskas said after the game. “We never went that long without a whistle or timeout or anything. We just figured that we’d keep it going and keep running and play to our pace because we were hitting shots and we were feeling good. So obviously we were a little bit tired, but I think we did a good job of pushing through and making shots when we were open.”

The transition opportunity in this clip would have pushed the Longhorns’ lead to five early, instead the Wolverines tied the game at six and kicked off a 13-2 run. Texas would never lead again.

The Wolverines scored at will on Texas in the first half, and this spurt was a good example of just how quickly they could respond to the Longhorns closing the gap even a little bit. Texas went on an 8-2 run late in the first half to cut the deficit to 12 with about two minutes left. Then, this happened. It took Michigan a little over 20 seconds to push the lead back out to 17 points. On the first play, Nik Stauskas hits Jordan Morgan rolling to the basket when Jonathan Holmes is late rotating back to Morgan. This was a case of Stauskas hitting the roll man, but John Beilein had an interesting quote regarding Stauskas’ pick-and-roll offense after the game:

“I think there was one time last year on a ball screen early in the year he had thrown the ball — he had shot it or thrown the ball to the roll man like 95 percent of the time,” Beilein said. “He wasn’t seeing the corners, so people keyed on that.  Now the game has slowed down and he has a great ability to see the floor and he’s unselfish.”

Stauskas had eight assists on Saturday, which matched a career high. One possession later, Derrick Walton gets into the lane, for some reason drawing the help of Isaiah Taylor. He throws a pass cross-court to Caris LeVert, who buries the three.

The defense Texas deployed in the second half was interesting. At first it looked like a 2-3, and Michigan attacked it as such. But it also had a matchup element to it. At the start of the second half, it wasn’t difficult for Michigan to score on the zone: Nik Stauskas said he was able to get people open simply by making eye contact with the basket.

There were just gaps everywhere, and they weren’t hard to find. The first play of this sequence, Derrick Walton hits a three after what was essentially a broken play and a nice find by Jordan Morgan. The second play was a better example of how Michigan attacked the zone. Walton gets the ball to Stauskas in the middle, Stauskas draws the attention of Cameron Ridley and hits Jordan Morgan cutting behind him. Finally, Walton finds an open space on the perimeter after Texas double-teams Stauskas. This sequence stretched Michigan’s lead to 16.

We’ve been saying since he hit the game-winning shot against Purdue: Glenn Robinson III is playing the way Michigan fans have been begging him to play all season. Against Texas, Robinson scored 15 points and hit two threes to go along with five rebounds (two offensive), a block and two steals. That block leads off this sequence, with the sophomore providing some athletic help defense on Isaiah Taylor. The second play is just a terrific individual effort by Robinson; he gets his defender on his heels with the up fake, and then finishes over Cameron Ridley inside. Finally, Nik Stauskas gets the attention of the Texas defense — especially Robinson’s defender, Jonathan Holmes — when he goes up for the shot but he dumps it off to Robinson for the three.

“I wanted the ball,” Robinson said about this stretch after the game. “They were kind keying in on Nik, and some of our other guys. I hadn’t scored in a while. I figured they were kind of sleeping. I got a couple cuts that I didn’t finish, but I went to the rim strong, finish over Cam Ridley, and then knocked down that shot from Nik. People are really keying in on him. Once he goes up for that shot, they’re trying to block it. That’s leaving other guys wide open. I think that was just my job to knock it down.”

Robinson’s scoring kept Texas at bay, as the Longhorns had cut the lead to eight at that time.

You could have picked any number of plays Michigan made down the stretch to hold off Texas, but this one brought the lead back to 11 after Texas had been hanging around the six to eight point deficit range for most of the final quarter of the game. It is amazing how open LeVert could still be at this point in the contest considering Michigan had already hit 13 3-pointers. Texas never really learned its lesson, and it probably coast them a fighting chance at this game. Michigan could really do anything it wanted on offense all night: four players scored over 14 points, Jordan Morgan was the second-leading scorer after Nik Stauskas. Beilein was asked about the even point distribution after the game:

“Yeah, I really don’t care,” the coach said at the podium. “I just want to score more points than the other team. If we play the way we practice, we have lot of passers and have a lot of shooters. And so if you look — if you get into the lane, we had a couple just beautiful plays where we got in the lane, landed on two and we found open people or found a different shot for ourselves, something we work on endlessly.”

Michigan is going back to the Sweet Sixteen.