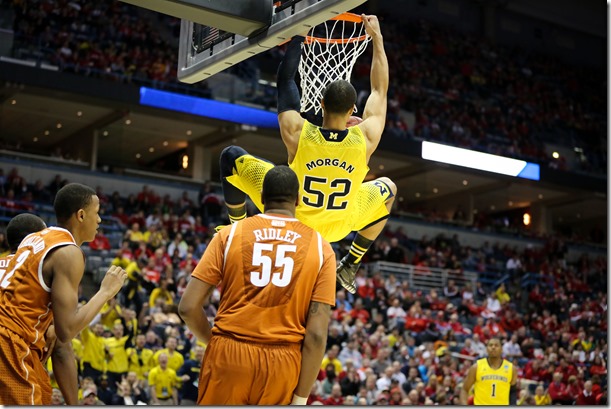 On Friday, the day before Michigan beat Texas 79-65 to reach the Sweet Sixteen for the second straight year, Jordan Morgan was fielding questions from media in the locker room along with the rest of his team. The topic of choice? The size of the Longhorn frontcourt. Morgan would be matched up with Cameron Ridley, who stood 6-foot-9 and every bit of his listed 280 pounds.

The question, in a nutshell: how was Morgan going to handle a player of that size?

Morgan answered that question — emphatically — on Saturday. The redshirt senior scored 15 points and pulled down 10 rebounds for his second straight double-double. The game continued what has been a dream final season for Morgan, who is now playing the best basketball of his career. The word is tired and a bit silly at this point, but it’s the perfect word to describe Morgan at this point: the Detroit native is playing with swagger.

Naturally, the tone of the questions Morgan faced was different following his performance against Texas on Saturday. At one point, he was asked about those questions from the day before, about Ridley’s size and getting little credit for his defensive track record. He was asked if he had felt a little disrespected.

Morgan raised his eyebrows and responded with a sly smile: “A little?”

This is who Morgan is. His conduct during interviews has mirrored his play on the court this season — he is comfortable, loose and, above all, he’s having fun.

The more fun he has, the more confident he is. It was clear from the way Morgan spoke about the matchup with Ridley that it was something he was looking forward to. John Beilein saw it during the team’s prep for Texas on Friday.

“As we went through our pregame routine of two days, we were very concerned about Ridley,” Beilein said at the podium after the game. “How could we stop him from getting rebounds and how we could stop him in the post. And Jordan just said, ‘I got him, Coach. Don’t worry, I got him.’”

Morgan was aided in the matchup by the pace of play early in the game. Michigan and Texas played a full eight and a half minutes of unbroken basketball. And the Wolverines took full advantage, pushing the ball at every chance. Texas didn’t help their own cause by missing most of their shots during that span, either — Michigan was able to push the ball after numerous Texas misses. Even if they didn’t get points off the fast breaks, the Longhorns had their hands on their hips by the official timeout after a foul on Texas sophomore Demarcus Holland — at the 11:25 mark in the first half.

According to Morgan, both teams were equally gassed after such an abnormally long stretch. But it’s worth noting Ridley was carrying 40-odd more pounds up and down the court.

After that, the game settled down into a rhythm and Morgan got busy making life difficult for Ridley. The redshirt senior said his plan was to make Ridley catch the ball outside his comfort zone and slap at the ball — he finished with two steals on the game.

“I study my opponent every game,” Morgan said. “For me, it was just about the differences in how to guard him. I was just making catches tough, making him catch it outside the paint and being real physical.”

That last part — being physical with Ridley — was something the narrative may have overlooked on Friday but that Morgan did not. The questions Morgan faced had more to do with running all over the court, trying to tire Ridley out. Again, it was as though the assumption was that Morgan would want to avoid an overly physical game with Ridley because of his size.

This was understandably perplexing to Morgan.

“We lift a lot of weights,” Morgan said, with a sarcastic twinge to his voice. “Coach Sanderson got us real strong. We play in the Big Ten. People forget we play in the Big Ten, day and day out. You don’t win the Big Ten without being physical. It’s good to kind of go out and show that we’re not going to just roll over and lay down.”

Morgan not only didn’t lay down, he barely even sat down — he matched his career high in minutes played on Saturday with 35 minutes. For someone who normally plays about half of available minutes, that’s a lot. But it’s also not entirely out of line with the trend as the season comes closer and closer to its final days. Excluding the game against Illinois, when Morgan was injured, the big man has played 20 minutes or more in every game since the Wolverines won at Ohio State.

Speaking of Ohio State, it was against the Buckeyes two years ago that Morgan originally set his career high in minutes played — against a similarly hyped, and similarly dispatched, center by the name of Jared Sullinger.

Michigan’s departing center is making the most out of his final days. He is playing outside his limited offensive role and is the single most indispensable player on the Wolverines’ defense. He has nearly made Michigan fans forget that this team is playing without its All-American center, which is perhaps his greatest feat.

Given his batting average this season when it comes to knocking out whatever challenge is thrown his way, it’s understandable why Morgan was particularly pumped for this latest one against Texas’s Cameron Ridley.

“I was excited for this one. Everybody was like, oh, he’s only 6-8 240, how is he going to hold his own in there?” Morgan said. “I ain’t got a lot of body fat. It’s been a lot of weights lifted these past five years, and I’m not about to just roll over.”

Morgan has never been one for rolling over. And at this point in his career, he has answered just about every question that’s been asked of him — whether they’ve been from the media before a big matchup or answering the bell when his team needs a big performance. At this point, Morgan is drawing his motivation from that same well that every player in March will be drawing from until it runs dry.