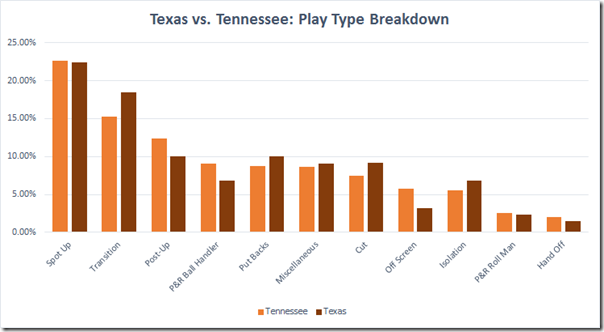 Michigan will face Tennessee on Friday (7:15 p.m. CBS) in the Sweet 16, pitting the Wolverines against yet another team with an imposing frontline. The Vols are a classic example of a team that played their way into the NCAA tournament and is now playing its best basketball.

The Vols were just 23-12 this season, 11-7 in the SEC, but they are ranked 6th by KenPom.com. Unsurprisingly, the Vols rank 337th in Ken Pomeroy’s ‘luck’ statistic. That means that the Vols have lost a lot of close games, but also that they’ve blown a lot of people out. The Vols have outscored opponents by 20.9 points per game in their last eight wins.

In Tennessee’s 12 losses, just one (26 points at Florida) has been decided by double-digits. On the other side of the ledger, Tennessee has a 35 point win over Virginia, 16 points over Mississippi, 19 points over Georgia, etc. The other half of the equation is that Tennessee has lost a handful of games it probably shouldn’t have:  Texas A&M twice, at Vanderbilt, vs. UTEP and at home to North Carolina State. Pomeroy wrote more on this quirk in his rankings at Deadspin.

The Vols have plenty of experience, starting three seniors and two juniors, but don’t rely much on their bench. Their bench plays just 24.2 percent of available minutes (295th) and managed to score 21 points in three NCAA tournament games.

Tennessee is more reliant on low-post scoring than any team left in the NCAA tournament. Over 16% of Tennessee’s offensive possessions are post-ups, or passes out of post-ups, and the Vols score .982 points per post-up possession.

Tennessee is still the fifth-most efficient post-up team left in the dance, which is impressive considering its post-up volume.

Two players account for 94% of Tennessee’s post-up possessions: Jarnell Stokes and Jeronne Maymon. Both Stokes and Maymon are listed at 6-foot-8, 260 pounds and play significant minutes for front court players (both over 70% of available minutes). Naymon much prefers to post up on the left block and turn his left shoulder, while Stokes prefers to turn his right shoulder on the right block.

Dominant on the glass

Jarnell Stokes and Jeronne Maymon are two of the top 25 best offensive rebounders in the country. For comparison, Texas’ Cameron Ridley was ranked 43rd nationally. Both players are active, aggressive and physical and can move better than Ridley.

The Vols are the fourth best offensive rebounding team in the country, although Kentucky actually grabbed more offensive rebounds in league games. 10.2% of Tennessee’s points this season have been scored on put backs. The numbers say that Stokes is a much better finisher when he grabs offensive rebounds, but both players pose a significant threat.

Unlike Texas, Tennessee has the size and athleticism to match up with Nik Stauskas and Caris LeVert. The starting Vol backcourt features leading scorer, 6-foot-6 Jordan McRae, along with 6-foot-6 wing Josh Richardson and senior guard, 6-foot-2 Antonio Barton (who played against Michigan when he was at Memphis in 2011, scoring 5 points in 19 minutes).

McRae’s efficiency offensively is a barometer for Tennessee’s success. He has a 48.1 eFG% in Tennessee wins compared to just a 36.0 eFG% in Tennessee losses. McRae’s offense comes primarily via the ball screen, spotting up on the wing, or in transition. McRae uses 28.8% of Tennessee’s offensive possessions and is also the top setup man on the roster with an assist rate of 18.1. His turnover numbers aren’t bad, but he starts to force the issue in losses. His assist to turnover ratio is 1.5 to 1 in wins compared to just 0.7 to 1 in losses. He’s also capable of dunks like this:

Richardson and Barton will both execute the occasional ball screen, but they use much fewer possessions than McRae. Most of their production comes spotting up on the wings and they both shoot a fair amount of threes, but are sub-35% long range shooters.

Tennessee is much better than Texas, 16th nationally in adjusted offensive efficiency, but the game plan for facing the Vols should be very similar to Texas. Here’s a look at the breakdown of play-types that both teams run.

The Vols run more post-ups and use more ball screens, but don’t attack in transition as often. Tennessee is at least as efficient, usually more, than Texas in every offensive category other than scoring off of screens and put backs.

Similar to Texas, the Vols don’t have a lot of great jump shooters, but they aren’t quite as incompetent.  Just 31% of Tennessee’s field goal attempts are threes and the Vols connect at just a 31.9% rate (283rd). McRae and Barton both take a lot of threes, but are 36% and 33% long range shooters. As a team, the Vols have just a 45.3 eFG% on jump shots (second worst among Sweet 16 teams).

Expect Michigan to pack the paint and have Caris LeVert chasing McRae, but the major defensive focus will be on Jordan Morgan and Glenn Robinson III’s ability to handle Maymon and Stokes in the low-post. Morgan has been playing terrific, but Tennessee has a size and physicality mismatch at the four spot. Texas was unable to exploit a similar mismatch against the Wolverines, but Tennessee will have a week to prep for it.

The Texas game was a reminder that it’s more important for Michigan to emphasize its advantages, rather than bang head-to-head against the Vols. Against Texas that meant: Pushing the tempo, spreading the floor and forcing bigger players to hedge ball screens.

Tennessee has a better transition defense than Texas, but it’s still weaker than its half-court defense. The Vols like to play slowly, 325th in tempo, and Michigan will almost certainly look to run off of any clean defensive rebounds. The Vols grade out as a good ball-screen team, 75th percentile nationally, but have the tendency to lose the roll man.

Zone will be yet another option. The Vols have faced zone defense in 24% of their offensive possessions, per Synergy, and have scored .92 points per trip. That grades out in the 60th percentile nationally, but is about equal to their half court man-to-man offensive efficiency of .90 points per trip (73rd percentile).