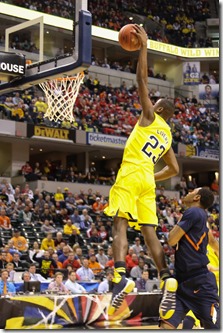 Michigan coach John Beilein was not made available to the media this week in person before heading to Indianapolis, but he took to the airwaves on numerous radio programs to talk about Michigan’s Sweet Sixteen matchup with Tennessee this Friday.

We have already broken down the Volunteers somewhat, though there will be more analysis to come. When Beilein watched Tennessee, he sees shades of Texas, with a crucial difference: experience.

“It’s similar to what we saw in Texas, but Texas had a younger team than Tennessee,” Beilein said on Monday during a spot on the Mike and Mike show on ESPN. “Tennessee is mostly juniors and seniors playing. They’re a talented team that has a lot of experience.”

The Volunteers do indeed have a lot of experience, especially compared to Michigan — they rank 80th in the country in average experience while the Wolverines are all the way down at 331st. (Photo: Dustin Johnston)

One of those experienced players is junior big man Jarnell Stokes. Stokes is one of Tennessee’s most potent weapons and does all of his work in the post — which is a reflection of Tennessee’s overall offensive philosophy, which is overwhelmingly focused on paint touches. The Volunteers play underneath the basket the most out of any team left in the NCAA tournament and also boast the fifth-best success rate in post offense; they go to the post often, and it often works out for them.

Stokes is a smarter, more effective and more dependable version of Texas big man Cameron Ridley. He grabs a ridiculous 15.3 percent of his team’s offensive rebounding opportunities while he’s on the floor and ranks 63rd in defensive rebounding percentage as well.

“He’s like how Chris Paul would be in a ball screen, that’s how he would be when the ball comes off the backboard,” Beilein said of Stokes while on the John Feinstein show on Monday. “He finds nooks and crannies to get his hands on the ball when most kids would say, I can’t get that one. Somehow he keeps it alive. That’s going to be difficult for us to keep him off the boards.”

Beilein added that Tennessee will be difficult matchup for the Wolverines because of Michigan’s inability to play two bigs at once.

“This is a team that we see quite often and is a difficult match for us because they have great quickness on the perimeter and they play with a classic two big guys on the blocks that just beat us up,” Beilein said on Mike and Mike. “When we lost Mitch McGary early in the year, that no longer became an option to us, to play with two bigs, and we’ve just been playing with one. It is going to be difficult. They will probably win the rebounding battle, we gotta win the possession battle like we did the other day.”

Over Michigan’s first two games in the NCAA tournament, Glenn Robinson III has taken his place firmly alongside Michigan’s other two main producers — Nik Stauskas and Caris LeVert — as an extremely important piece to the Wolverines’ offensive puzzle. The sophomore has combined to score 28 points, grab 12 rebounds and register three steals games against Wofford and Texas.

But it’s more than just his production — Robinson is making clutch plays, as well. Against Wofford, he went on a brief tear at the end of the first half as the Terriers were scoring consistently. Against Texas the athletic wing came up big on defense, blocking a shot by Isaiah Taylor into the stands with Michigan holding onto an eight point lead. Offensively he was just as effective, keeping Texas at bay with a teardrop and a three.

“This is the fifth time now that I can recall that the momentum has shifted with a Glenn Robinson play,” John Beilein said on WTKA on Tuesday morning. “He goes with the runner teardrop over the outstretched hands of a shotblocker. And then he comes back — because of the zone they were playing we couldn’t get Nik (Stauskas) shots. We said, okay, we can’t get Nik shots but Nik can get other guys shots so just give him the ball, give him some action, and let him play ball. He found Glenn and Glenn knocked another one in.”

Considering the amount of flak Robinson has taken this season for a stretch in the middle of the season when many fans felt he wasn’t living up to the preseason hype that surrounded him as a possible lottery pick, it is nice to see him produce the way he has the past two games.

Beilein spoke with Matt Shepard about his feelings regarding Robinson’s development.

“Glenn’s just a really good player that’d developing his skill set every day right in front of us,” Beilein said. “People want to anoint people and then make them stars overnight. It’s not fair. So that’s all he’s doing. He just keeps getting better because he’s working at it. He works hard at it. He’s working hard on his strengths, his weaknesses. And he’s doing what every young man should do in order to get better.

“It’s never going to be quick enough for the people who start anointing stardom. He is just getting better and better and we love him and you’re seeing it right now — all his hard work paying off.”

As of this moment, no plans for Mitch McGary to play

When Sam Webb gave Beilein an opportunity to completely shut the door on the possibility of Mitch McGary returning to action in the NCAA tournament on Tuesday morning, Beilein shut it — and then cracked it open again.

“We have no plans for Mitch to play. Simple enough?” Beilein said. That alone would have been very simple, indeed. But the coach went on:

“Plans can change,” the coach added, “but we have no plans for Mitch to play right now.”

The team had considered surgery in November, which could have allowed for Mitch to make a late season return, but opted against it because McGary started playing well before reinjuring his back. McGary has been out since January after undergoing back surgery, and his return to the team is considered highly unlikely. His presence in the team’s open practice — although his participation was extremely limited – spurred speculation about a possible return, and Beilein’s words don’t necessarily help to stem that.