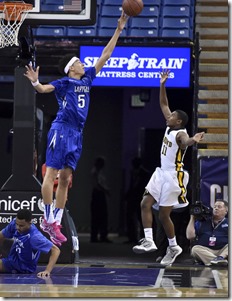 Michigan commitment DJ Wilson’s high school career has come to an end, but he finished with one of his best games.

The 6-foot-8 combo forward was an instrumental piece of a terrific season for Capital Christian. Capital Christian lost in the Open Division championship to Bishop O’Dowd, a team that features the No. 1 junior in the country, Ivan Rabb. Despite facing high-profile competition, Wilson had a great game.

It was the end for D.J. Wilson, Capital Christian’s finest player and, like so many of his teammates, a young man of class and character. He insisted he would have a better showing than his first showing against O’Dowd and backed it up. The 6-foot-8 forward headed to Michigan had 29 points, 10 rebounds and four blocked shots in displaying his versatile game – running the floor, hitting jumpers, dunking and defending.

O’Dowd has won five of the last 10 NorCal titles, and O’Dowd coach Lou Richie was impressed with Wilson. (Photo: SacBee)

(Wilson) definitely showed what his potential is. Our game plan was to let him beat us with perimeter shooting. Well, he showed he could do that. And about everything else. He was amazing.”

Wilson averaged 14 points per game on the season and Capital Christian finished the year 28-4. Here are a couple of highlights of Wilson in action from the game.

Class of 2015 Michigan offer Jalen Brunson had a monster showing in the Illinois Class 4A state semifinal against Whitney Young and Duke commitment Jahlil Okafor. Brunson’s 56 point outing was a state finals tournament record and despite scoring 56 of his team’s 68 points, Brunson didn’t turn the ball over once.

Illinois head coach John Groce was in attendance along with his athletic director, Mike Thomas. The Illini were once considered to be out of the running for Brunson, but have since jumped back into the mix. Michigan, Michigan State, Temple and Villanova are some of the other schools involved, but Brunson should have a big summer on the AAU circuit.

Much was made over a photograph that circulated the internet which appeared to show Brunson giving the finger to the crowd and he was almost suspended for the third-place game. The linked article above does a good job of explaining the situation and has photos to prove that the incident was not intentional.

Michigan was one of the first schools to start recruiting class of 2015 standout Luke Kennard, but the 6-foot-5 junior verbally committed to Duke on Monday evening.

Kennard rose to five-star status last summer and earned offers from just about everyone in college basketball including Kentucky, Duke, North Carolina among many others. Michigan had offered Kennard on June 15th, 2013.

The Wolverines currently have outstanding class of 2015 offers to Jalen Coleman and Jalen Brunson. Michigan is evaluating several other wing targets, but the most recent to visit Michigan is Kyle Ahrens. Ahrens is Kennard’s AAU teammate and a four-star prospect.