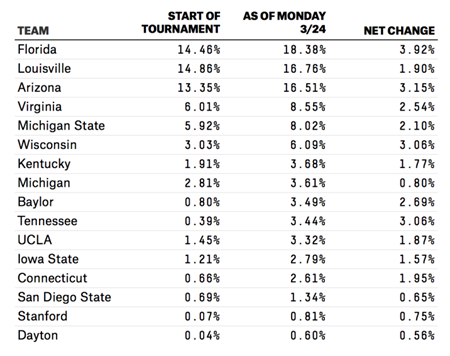 The Wolverines are still about what everyone thought they were. Here are some highlights from around the national media about this weekend’s regional games. (Photo: Dustin Johnston)

Most national publications re-ranked the teams remaining in the tournament. CBS ranked Michigan No. 9, one spot behind Tennessee. ESPN’s Myron Medcalf slotted the Wolverines at No. 8, one spot ahead of Tennessee.

Last season, Michigan surprised the field with a run to the Final Four, when former Wooden Award winner Trey Burke guided it through a series of postseason battles. The Wolverines are a different team without him, but this version still toyed with their first two opponents, Wofford and Texas. They shot 21-for-45 from the 3-point line in those games. They defended well, too. Wofford scored 0.71 points per possession in the round-of-64 matchup, per Ken Pomeroy, and the Wolverines held Texas to a 37 percent clip from the field. This is a dangerous team.

Medcalf’s counterpart at ESPN, Andy Katz, likes the Vols to upset the Wolverines.

Tennessee. The Vols, albeit against UMass and Mercer, have looked pretty strong inside and have made the necessary shots to pull away from teams. They have more than enough to beat Michigan and if they do, they match up well against Kentucky or Louisville. It’s not crazy to think the Vols could go from the First Four to the Final Four.

Seth Davis writes that Michigan was the most impressive team in the first weekend.

If you take the two games together, then the most impressive team last week was Michigan, which beat Wofford and Texas by a combined 31 points. Needless to say, the Wolverines’ guards performed well, but the guy who needs more love on this team is senior forward Jordan Morgan. He had two double-doubles, including a workmanlike 15-point, 10-rebound performance against the Longhorns’ big front line. He is the biggest reason why the Wolverines did not unravel after they lost sophomore forward Mitch McGary to a back injury.

The defending champs and last year’s runner-up fell below the fold with their wins over the weekend, but there is no reason to doubt each team’s potential to return to the Final Four. Something about the loss to Michigan State in Big Ten title game seemed to shake the public’s confidence in the Wolverines, but those in John Beilein’s locker room shook it off quickly and showed Final Four form in a 79-65 win over Texas that was never in doubt. Nik Stauskas, Caris LeVert and Derrick Walton combined for 15 of Michigan’s 21 3-pointers over the weekend, a good sign for Big Blue.

Michigan has quietly taken care of business thus far, beating 15-seed Wofford by the sleep-inducing score of 57-40, then taking care of Texas 79-65. Both featured double-digit halftime leads, meaning the Wolverines have not really been given much attention so far, especially in a region featuring popular bracket pick Louisville, Duke losing to Mercer and the Wichita State-Kentucky classic. But Michigan should hardly be taken lightly, even if it’s still playing without big man Mitch McGary, who continues to rehab his injured back. Senior Jordan Morgan has filled in admirably underneath, registering double-doubles in both tournament games, while sharpshooter Nik Stauskas and forward Glen Robinson III give the Wolverines a pair of stars, and even if they’ve been lurking in the background as a No. 2 seed, you can bet John Beilein will have them prepared. But even with Duke out in the bottom half of the Midwest, it turns out Michigan should be just as concerned with Tennessee.

KenPom weights in with his updated log5 odds for the Sweet 16.

Perhaps the most interesting tidbit is that Tennessee would have been 11th on the list before last weeks’ games.

Tennessee would have ranked 11th on this list at the beginning of the tournament and they’ve moved up to fifth, thanks to getting rid of an extra game, piling it on Iowa in OT, and beating UMass easily.

Nate Silver updates his odds, which bump Michigan up just a bit.