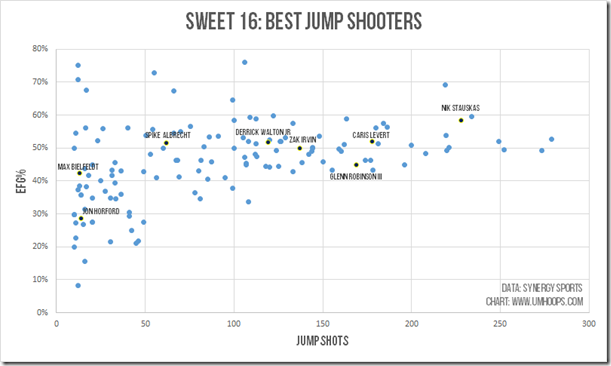 That’s no big surprise. Ask anyone who has watched the Michigan offense over the last two years and the first words out of their mouths will probably be: “ball screens” and “threes”. Beilein did it with Trey Burke and Tim Hardaway Jr., now he’s doing it with Nik Stauskas and Caris LeVert.

The Wolverines finished 2013 with the best offense in the country, per Ken Pomeroy, and are ranked third in the country this year. With a few more impressive offensive performances, the Wolverines could find themselves at the top spot for the second year in a row.  John Beilein has always been regarded as an offensive genius, but he’s upped the ante the past two seasons.

Michigan doesn’t just run the most ball screens, it has the most efficient ball screen offense left in the NCAA tournament.

29% of Michigan’s offensive possessions are either passes or shots off of a ball screen and the Wolverines score nearly 1 point per possession on ball screen possessions. UConn is the only other team left that comes close to Michigan’s efficiency and usage in the ball screen game.

The Wolverines are able to be so efficient because they have one of the most gifted ball screen players in the country. Nik Stauskas doesn’t have the radically high-usage of a Russ Smith, Shabazz Napier or Xavier Thames, but he’s markedly more efficient than any other player who uses at least three ball screens per game. The following graph compares possessions used per game and points per possession by individual players.

Stauskas is the best ball screen player left in the tournament and his diversified game continues to wow opponents. A year ago 42.6 percent of his offensive possessions were catch and shoot jumpers, this year that number is down to just 26%.

“Whenever [Stauskas] decides to leave college there’s no doubt in my mind he’ll play at the NBA level. 6-6, he can really shoot the ball, he’ll put the ball on the floor,” Tennessee head coach Counzo Martin said on Tuesday. “Last year he was more of a catch and shoot. Now he puts the ball on the floor, makes plays, comes off the ball screen, can get to the rim, dunk the ball on you, go over the top of you. Makes the decisions out of the ball screen and I guess that’s why he’s Big Ten player of the year in a league that was so tough and so physical.”

“Nik Stauskas is a great player,” Richardson said on Tuesday. “He shoots threes, he can drive to the hole, he can do pretty much everything. It’ll be a tough cover again. Their offense pretty much flows through him, I think he leads them in points and assists, so it’ll be crucial to try to get him out of his rhythm.”

“It’s just another player. I’ve been guarding guys like that for a while – it’s nothing new.”

Richardson is confident, but not many have been able to stop Stauskas. Shutting down Stauskas has the effect of slowing Michigan’s other offensive weapons. Beyond the simple roll, shot or drive off of the ball screen, there’s also plenty of residual action that ball screens create. Michigan’s spacing opens up jump shots for the other three Wolverines on the floor at any given time.

Michigan shoots more jump shots than anyone left in the NCAA tournament — 4% more of the Wolverines’ field goal attempts are jumpers than any other team in the field. The following scatterplot shows effective field goal percentage (y-axis) against percentage of jump shots (x-axis) with a team’s adjusted offensive efficiency ranking next to their name.

The jump shot is often criticized as an unreliable shot, but the two teams that shoot the most jump shots (Michigan and Wisconsin) happen to have the best offenses left in the tournament and the team that shoots jump shots most effectively has the next best offense.

Michigan’s jump shooting attack is successful because it’s balanced. Nik Stauskas is one of the very best shooters in the country, obvious by the chart below, but Caris LeVert, Zak Irvin, Derrick Walton and even Glenn Robinson III can be serviceable jump shooters as well. There are very few teams with that sort of shooting balance.

Tennessee is 20-1 when it has a higher effective field goal percentage than its opponents. Michigan is 22-1 when it accomplishes the same feat. It’s no secret that Michigan hasn’t stopped many people with its defense, but if the Wolverine offense is clicking, it’s unlikely that the Vols can keep pace.

At the end of the day, beating Michigan comes down to stopping the Wolverines’ offense. Tennessee will get its fair share of offensive rebounds and probably score points at a rate higher than it’s used to this season, but the Vols will have to slow down Michigan’s offense to advance to the Elite Eight.

Michigan is just 2-7 when held below 1.06 points per possession and is 25-1 when it tops that mark — even against teams like Michigan State and Indiana that carved up the Wolverine defense, the offense has prevailed. This is who Michigan is and there’s no hiding the secret. The only question is whether anyone can stop it.