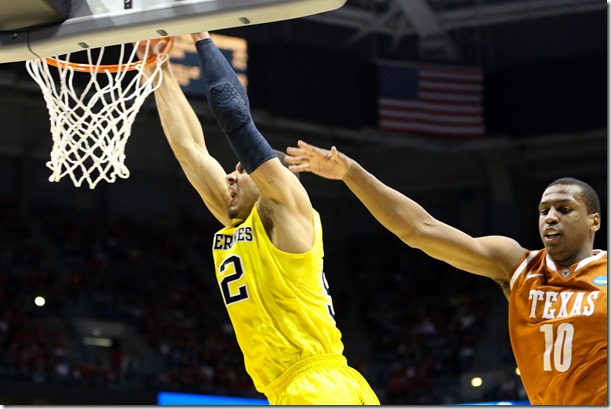 Our weekly feature tracking the performance of Michigan players performance over two game segments of the season. Form Tracker is now interactive. Readers can vote on each player’s rating by hitting ‘Too low,’ ‘Too high’ or ‘Agree.’  (Photo: Dustin Johnston)

Nik Stauskas was named to the NABC First Team All-American team on Wednesday morning, an honor befitting what has been a remarkable season for the sophomore. He’s been pretty good in Michigan’s first two games of the NCAA tournament, as well — it just feels as though he’s been scoring a bit more quietly than normal. This is mostly due to other Wolverines stepping up on offense. With the offensive emergence of Glenn Robinson III over the past two games and Jordan Morgan against Texas, Stauskas hasn’t had to carry the load to the extent we saw in the middle of the season. That being said, he’s still getting his: 15 points on nine shots against Wofford, and 17 points — despite not hitting a two-pointer  — against Texas to go along with eight assists.

We were effusive in the praise of Jordan Morgan last week, and with good reason. Morgan has been spectacular in Michigan’s first two NCAA tournament games — and his playing time could be the strongest evidence in favor of this assertion. The redshirt senior played 29 minutes against Wofford and matched a career high with 35 minutes against Texas. John Beilein has said numerous times that Morgan is simply playing too well to take him out of the lineup for too long. Morgan had a double-double against Wofford with 10 points and 10 rebounds, then turned in an even stronger performance against Texas against stronger competition, with 15 points and 10 rebounds. Perhaps most telling was the lack of production by his defensive assignment, Cameron Ridley; the Texas center grabbed nine rebounds, but scored only six points.

It’s tough for Michigan to ask any more of its sophomore wing than what he’s been able to do over the first two games of the NCAA tournament. Glenn Robinson III is showing fans the full extent of his game and he seems to be having fun doing it. One of the differences evident in Robinson’s play is that he is continuing to shoot the ball even if he encounters a few early misses — against Wofford, Robinson made only one of four 3-point attempts but still scored 14 points and was consistently aggressive, pulling down seven rebounds. Versus Texas he was similarly productive, racking up 14 points again, this time with the aid of 2-of-3 shooting from beyond the arc. He also grabbed five rebounds, blocked two shots and recorded a steal.

Caris LeVert hasn’t been extremely productive, but he’s been pretty good in Michigan’s first two NCAA tournament games. The sophomore scored only six points against Wofford on a night when he just couldn’t find many shots — he was 2-of-6 from the field. However, he did grab five rebounds and dish out four assists. Against Texas, LeVert was more effective, scoring 14 points to go along with four rebounds and three assists. After two so-so games in a row against Michigan State in the Big Ten Tournament championship game and versus Wofford in the round of 64 matchup of the NCAA tournament, LeVert could be back on the upswing if he can get some boards and some fast break opportunities against Tennessee.

Derrick Walton hasn’t been all-world in the first two games of the NCAA tournament for Michigan, but he has done what’s been asked of him. Against Wofford, Walton chased around the Terriers’ leading shotmaker, Karl Cochran. While Cochran got his 17 points, he needed 21 shots to do it. Walton has been dead-eye from beyond the arc this tournament, hitting both of his only two 3-point attempts against Wofford and making two of four from long range versus Texas. While Walton scored eight points against Texas, Michigan coaches would probably like to see a higher number in the assist column for the freshman, who had only two in that game.

Michigan’s sharpshooting freshman wasn’t particularly sharp in Michigan’s game against Wofford to open up the NCAA tournament. Though he played 20 minutes, Zak Irvin didn’t hit a 3-pointer, going 0-for-4. This was his first goose egg from long range since playing only nine minutes against Minnesota on March 1st. However, in fewer minutes against Texas, Irvin acquitted himself well, hitting 2-of-4 from deep in nine minutes against the Longhorns.

Michigan’s backup point guard wasn’t very effective in Michigan’s game against Wofford, recording only an assist and a foul in eight minutes. However, Spike Albrecht stuffed the stat sheet in 11 minutes versus Texas: he scored five points, grabbed three rebounds, recorded an assist (to go along with zero turnovers) and a steal. Albrecht also hit a huge three from the corner against the Longhorns late that went a long way toward sealing the victory for the Wolverines.

John Beilein has been adamant: Jon Horford hasn’t been playing poorly, Jordan Morgan is just playing extremely well. As it is, Horford is spending most of his time on the bench these days, The redshirt junior was actually solid against Wofford, scoring four points, pulling down three rebounds and blocking two shots in 11 minutes. But against Texas, Horford played only five minutes.