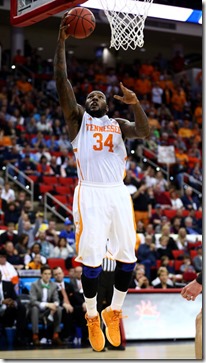 INDIANAPOLIS — With the third-most efficient offense in the country, the first question for any team preparing to face Michigan is how it can stop the Wolverines on the offensive end. It is the question Tennessee, Michigan’s Sweet Sixteen opponent, has been asking all week leading up to the game between the Wolverines and the Volunteers at Lucas Oil Stadium on Friday.

Tennessee boasts the 13th-best defense in the country in terms of efficiency, so it would seem the Volunteers are as well-equipped as any team to answer the challenge Michigan’s presents.

But even for good defenses, there are very few good answers to that question. On Thursday, Tennessee’s Jeronne Maymon (right) acknowledged that Michigan’s offense can be tough to figure.

“Their offense is pretty complex,” Maymon told reporters during Tennessee’s press conference. “They do a lot of backdoors, and it’s going to be hard for us. But Coach [Kent] Williams, head of the scout, he did a good job getting us ready.”

“Four guys on the perimeter. They can pass, shoot, dribble the ball, come off ball screens, can attack the rim, can shoot pull‑ups. You don’t see many teams like that that can do it on the perimeter,” Martin said on Thursday. “A team with a lot of moving parts. Great spacing, make one‑on‑one plays, you don’t see many college teams with multiple teams that can play multiple plays.”

While there are plenty of players to worry about on Michigan’s roster, the number one worry is obviously Nik Stauskas. The recently-crowned Big Ten Player of the Year has played well thus far in the NCAA tournament, averaging 16 points and 4.5 assists in Michigan’s first two games.

The defenders likely to draw the Stauskas assignment are 6-foot-6 senior Jordan McRae and 6-foot-6 junior Jordan Richardson. Both are long and strong — unlike most players defending Stauskas this season, both are just as tall and probably quicker than the sophomore.

Martin said Richardson will likely start out on Stauskas, as McRae’s energy needs to be saved for offense — but don’t be surprised if both of them are guarding the young Canadian at different points in the game. Like any other team playing Michigan, because of the myriad of screens Stauskas will be running through, defending him will be a team effort.

“Michigan’s offense pretty much flows through (Stauskas),” Richardson said at the podium on Thursday. “He’s their best perimeter scorer, probably their best passer, and I think it would be critical to run him off the 3‑point line as well as LeVert, they’re probably their two best outside scorers.”

The defensive focus will be on Stauskas, but it can’t be focused to narrowly because of Michigan’s other weapons. Martin said that even Jordan Morgan is a player defenses need to watch out for.

“I don’t think Jordan Morgan gets the credit he deserves as a skilled big man because of probably how the offense is set,” Martin said. “He can do a lot of things. A very talented basketball player.”

Much of the talk surrounding the matchup has to do with Tennessee’s size advantage in the post. Specifically, how Michigan will handle Maymon, who will likely draw Glenn Robinson III as his defender. This is a significant size mismatch favoring the Volunteers — Maymon is 6-foot-8, 260 pounds compared to Robinson’s 6-foot-6, 220 pounds. Robinson has been going up against bigger players for most of the season as an undersized four man, but this will be an especially daunting challenge.

Of course, that was the perception heading into Michigan’s most recent game, against Texas. Robinson was matched up against Jonathan Holmes, who is 6-foot-8, 240 pounds. Holmes grabbed nine rebounds, but only scored nine points. Texas deliberately went at Robinson early and forced the issue inside — that’s something that Maymon said he didn’t necessarily think was wise.

For Maymon, the focus will be on playing his game and not altering anything to significantly.

“Just play my game. You don’t want to do anything too extra or try to be overaggressive. That’s how you get foul calls,” Maymon said. “I think me being so big and Jarnell (Stokes), me and him both being so big, we’ve got smaller guys on us, and we kind of duck in or something, they fly across the court, it’s kind of like a foul on us. You don’t want to be too aggressive, just play your game like you’ve been playing it.”

It is Jarnell Stokes, Maymon’s frontcourt mate, whom the spotlight will be securely fastened on during Friday’s game. Stokes is an expert rebounder and has been playing out of his mind during Tennessee’s three NCAA tournament games. The junior is averaging just over 20 points and 15 rebounds per game in that span.

Not only that, but Stokes appears to have a pretty solid handle on why raw rebounding numbers can be misleading. When asked about Michigan’s lack of offensive rebounds, Stokes pointed out that since Michigan makes a significant percentage of its shots, there probably aren’t too many offensive rebounds to grab.

“You can’t really look at how many rebounds they have because they have shot a high percentage all season,” Stokes said. “We are more of an inside team, we get to the rim and that leads us to get rebounds. They know that coming into the game and I’m sure they have a scheme on how to box us out.”