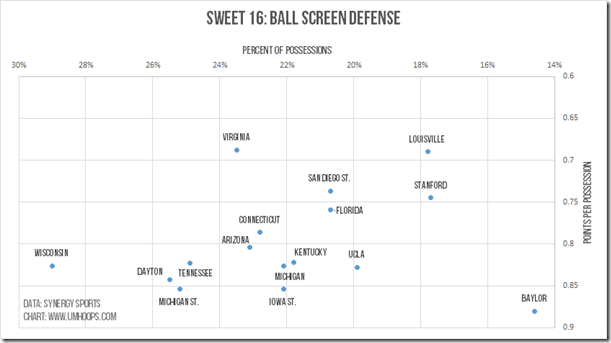 It’s been a roller coaster ride of a season for Cuonzo Martin and the Tennessee Volunteers.

In the middle of February there was a petition to “Bring Back Bruce” that was signed by tens of thousands of Tennessee fans. Yes, the same Bruce Pearl that Michigan put of his misery with a 30 point trouncing in the NCAA tournament three years ago. Tennessee was 16-11 and .500 in an average SEC conference at that point and had just lost to Texas A&M for the second time. But just when the season looked all but over, the Vols turned things around.

Tennessee’s resurgence was fueled by wins over Mississippi St. (208), Vanderbilt (112), Auburn (128), Missouri (77) and South Carolina (113). The opposition hasn’t been great, but Tennessee has now won eight of it last nine games. The turnaround was undeniably assisted by the weak SEC, as Vols only beat one KenPom top-50 team in the regular season – Virginia by 35 (!) points at home. The late season wins were enough to earn Tennessee a trip to the First Four and that was all it needed. The Vols beat Iowa, UMass and Mercer in six days and now find themselves two wins away from the Final Four.

Looking at Tennessee’s game-by-game efficiency margins, the story of its season becomes clear. Tennessee has a lot of blow out wins, very few blow out losses and turned on the afterburners in the last month. The polynomial trend line is of the third-order which allows for two bends or changes in direction.

So what changed for the Volunteers down the stretch? The defense has improved moderately as the season has worn on, but the offense has found another gear.

Tennessee’s offense relies on offensive rebounds and post-ups by Jarnell Stokes and Jeronne Maymon or gets out of the way and allows Jordan McRae to make something happen. The Vols aren’t a great shooting team — 50.3% on twos (94th), 31.9% on threes (282nd), 49.6 eFG% (170th) — but are the fourth best offensive rebounding team in the country. Similar to Texas, sometimes Tennessee’s best offense is a missed shot. The Vols aren’t great at getting to the free throw line (they were ranked 11th in free throw rate in the SEC) and their turnover numbers are mixed. On the season, Tennessee ranks 77th in turnover rate at 16.9%, but in SEC play the Vols gave the ball away on 18.3% of their possessions — only 9th best in the league.

Defensively, Tennessee is very good. The Vols allowed .97 points per trip in SEC play, 2nd best in the conference, and were the best in the league at grabbing defensive rebounds and not fouling. Tennessee manages to defend the rim without giving up free throws or threes. Vol opponents shoot just 44.3% on twos (40th) and only attempt 27.3% of their field goal attempts from three-point range (21st) while connecting at a 33.8% clip (139th). The one thing Tennessee doesn’t do is force turnovers, the Vols have only forced turnovers on 16.8% of their opponents’ possessions this season.

A lot of the pregame attention has been on Tennessee’s front court and how similar it is to the Texas team that Michigan faced on Saturday. That analysis omits one major difference between the two teams: Jordan McRae.

McRae is a far better wing player than anyone Texas had on its roster and he leads Tennessee in scoring and assists with 18.6 points and 2.5 assists per game. McRae uses 29% of Tennessee’s possessions, but he’s an effective volume scorer and doesn’t turn the ball over much.

Roughly a third of McRae’s production comes in the paint, but he’s also an above average shooter in the mid-range and from three-point range. McRae is a complete offensive player and he will be a chore for Michigan’s defense – notably Caris LeVert.

Down low, Jarnell Stokes and Jeronne Maymon present a formidable challenge on the low block. Mitch McGary referred to Stokes as a ‘fridge on wheels’ and he averages 15.2 points and 10.7 rebounds per game.

Stokes is a walking double-double – he’s reached that milestone in six of his last eight games – and has a size advantage over Jordan Morgan, who seems to relish these opportunities. In the NCAA tournament, Stokes has rebounded 19.7% of his team’s missed shots – by himself. Michigan’s entire team rebounded 29% of its misses in its first two NCAA tournament games (and for the season). Stokes isn’t just a good offensive rebounder, he’s a great one.

Maymon is a more limited offensive player – he’s not effective outside of five feet – but he’s almost as good of a rebounder as Stokes.

Glenn Robinson III’s size doesn’t quite matchup with Maymon’s 6-8, 260 pound frame, but both players will have their hands full to deal with the other’s skills.

Tennessee’s next best perimeter threat is Josh Richardson. Richardson averages 10.1 points per game and is more of a streaky offensive player – most recently he went for 26 points on 13 field goal attempts versus Mercer. He loves playing from the left-corner and into the mid-range.

Richardson is drawing more headlines for his defensively abilities. He’ll be tasked with guarding Nik Stauskas and sounds very confident.

“He’s just another player,” Richardson said of Stauskas. “I’ve been guarding guys like that for a while now. It’s nothing new.”

Antonio Barton is the fifth starter for the Vols, averaging 7.7 points and 2.1 assists per game. He’s not nearly as efficient, but is shooting over 40% from three in the month of March.

Tennessee isn’t deep, starters play 77% of available minutes and bench players have scored just 19 points in three NCAA tournament game despite all two of the three games being fairly lopsided.

Nik Stauskas admitted that he had no idea how Tennessee would guard Michigan’s ball screen offense, but this is the chess match that could decide Friday’s game. Michigan has the best pick and roll offense left in the tournament and the Wolverines are tough to beat when the ball screen game is clicking. Tennessee has a great defense, but the Vols don’t defend ball screens as well as some other teams left in the dance.

Tennessee doesn’t rank too favorably on this chart, but it’s worth noting that the Vols are slightly better than the Division I average in pick and roll defense – .86 points per ball screen allowed. The teams that are left in the NCAA tournament are all pretty good at defending ball screens, a big reason they are all around.

Michigan isn’t going to be able to stop Jeronne Maymon and Jarnell Stokes completely. The duo is too big, too strong and too good. But just like Glenn Robinson III can’t guard Maymon on the low block, Maymon or Stokes shouldn’t be able to guard Robinson on the perimeter. Robinson is playing his best, most consistent basketball of the season over the last month, and he’ll have to exploit Maymon on the defensive end. That means off the dribble isolations, pick-and-pops, elbow jumpers and corner threes. Robinson has all of the tools in his arsenal and he’ll need to play an A-game offensively.

Both teams are good at minimizing fouls, but Tennessee has better personnel for drawing them. Stokes and Maymon draw 10.7 fouls per 40 minutes and both attempt over 60 free throws per 100 field goal attempts. Michigan doesn’t have the depth to deal with foul trouble, especially to Jordan Morgan, but Tennessee doesn’t have much depth either. Whichever team can keep its star big men on the floor will have the upper-hand.

Despite the fact that Michigan is the 2 seed and Tennessee is the 11 seed, KenPom likes Tennessee by a final score of 66-65. Pomeroy’s odds give Michigan a 46% chance of advancing to the Elite Eight.