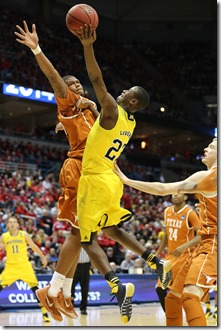 Tennessee plays tough defense. This is a known quality of the Volunteers. It’s something they hang their hat on and it’s statistically verifiable. They don’t force a ton of turnovers, but the Tennessee opponents manage just a 46% effective field goal percentage and the Vols’ defensive rebounding percentage of 72.5% is ranked 19th nationally. (Photo: Dustin Johnston)

Given all of that, Tennessee’s defense being a main talking point heading into its game against Michigan makes sense. But there is one important point, made on Wednesday’s podcast, that should not be lost in the pre-game conversation:

Michigan played all season in the Big Ten, one of the toughest defensive conferences in the country — with teams like Michigan State, Ohio State and Nebraska, some would say the toughest.

“I think they are a pretty good comparison what we would see in the Big Ten with their physicality in the paint and on top of that they’ve got really good scorers on the perimeter,” Jordan Morgan said during Michigan’s press conference on Thursday. “That’s pretty much what we see in the Big Ten.”

Nik Stauskas will be the primary focus of Tennessee’s vaunted defense, with the Volunteers’ duo of 6-foot-6 wings likely drawing equal time on the sophomore. Junior Josh Richardson will get the initial matchup, but senior guard Jordan McRae could also defend Stauskas for stretches. Both are physical, long, and just as tall as Stauskas.

Michigan is certainly not taking Tennessee’s defense lightly — all the Wolverines are saying is that they have faced tough defenses before and come out ahead. The same could even be said about their most recent game, against Texas in the round of 32.

“We had facing teams that had a little bit of length, especially in the Big Ten on the perimeter,” Robinson said. “Also they have a bunch of big guys who can get work done inside. So we faced that. A lot of people said the same thing about Texas.”

In 2011, Michigan was experiencing a bounce-back season after a disappointing run the year before that saw them miss the NCAA tournament. Led by sophomore point guard Darius Morris, Michigan marched into the first round of the NCAA tournament and blew out Tennessee by 30 points.

That Volunteer team was the last to be coached by Bruce Pearl. Pearl was fired at the end of that season following a lengthy investigation into numerous NCAA violations.

Obviously, much has changed in the three years since Pearl’s departure. Michigan has gone from an up-and-coming program to a defending Final Four team. Tennessee coach Cuonzo Martin is taking his first team to the NCAA tournament after three years of underachieving and a tumultuous 2013-2014 season to this point.

Jordan Morgan, a player who was a leader on that 2011 Michigan team even then and is now one of the most important pieces to the Wolverine puzzle, spoke on the differences between the two Tennessee teams he’ll have faced after tomorrow.

“I think just their style of play is different with the different coach. You kind of look at some of the pieces that they have,” Morgan said. “They have McRae is kind of similar to probably Scotty Hopson and they were pretty big down low. Tobias Harris gave us trouble in the first half of that game. They have a lot of size in the front court.

When Glenn Robinson III takes the court against Tennessee on Friday, it will be against his father’s former teammate and roommate at Purdue — Volunteers coach Cuonzo Martin.

“(Martin and Robinson Jr.) were teammates at Purdue,” Robinson said during Thursday’s media session. “They were actually roommates. He’s a great family friend. I know my mom and my grandma are all close with him and his family. So we’ve had a relationship throughout the years. He recruited me. Great guy. And it’s just funny how things work out and now we’re playing him in the Sweet 16.”

Martin recalled playing with Robinson Jr. at Purdue and reflected on watching his son grow up to play for one of the premiere programs in college basketball.

“I have a good relationship with Glenn (Robinson Jr.). Obviously my roommate, teammate, a great player, probably the best I’ve ever played with and against.  But just a good man,” Martin said. “I’m happy for Tre Robinson III and it will be fun playing against him. Of course, we’d like to get the win, but I’m happy to see where he’s come, how far he’s come as a basketball player. He’s a great kid and I watched him grow up so I’m happy for him.”